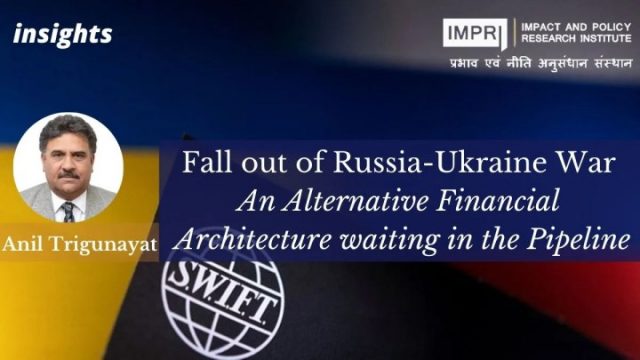 Russia’s invasion of Ukraine is a war being fought by the US and the West by other means to decimate the so-called ‘ malicious ‘ influence of the largest country in the world. Much against the advice of the likes of Kennan, Kissinger and scores of others the Ukraine crisis happened.

I guess this mutual hate is not about Russia but more about macho man Putin as the ‘deep state’ in one and the ‘Siloviki’ in another continue to carry the mistrust and hatred despite the disintegration of the Soviet Union. Neither has stepped back from the brink except for an early romance that left Russia as a jilted lover. Recent overtures by Biden towards Putin were wasted on the wheatlands of Ukraine.

No point arguing about who started the war. Poor Ukrainians are suffering and the possible biggest exodus is waiting to happen and Europe would have done a self-goal as the refugee crisis deepens. This will haunt them for years both morally and financially. Putin, who spoke of them as one people, would have sown the seeds of hatred among Ukrainians for times to come. So who gains in this infructuous war. Geo-politics and Geo-economics stupid! It was not a war between Moscow and Kyiv, to begin with. It is between Washington and Moscow.

But this time around, while pumping in arms and ammunitions and funds into Ukraine to fight the Russian bear while pumping the ego of an embattled ‘Hero by Default’ in Zelensky, the west has also ensured that Kyiv will be out of NATO for good as Comrade Zelensky’ the sacrificial goat’  has begun to admit himself after being disenchanted by his first-hand experience. US seems happy that by this invasion Putin has overstretched himself as his calculations for an early victory were off the mark and most likely the sweeping and crippling sanctions will generate grassroots discord against THE LEADER in Russia.

Of course, in this hybrid warfare the West, owning all major instruments of information and disinformation, has created a successful narrative against Putin in non-Russian territories as three Heads of Government from the neighbouring East European countries visited Zelensky to provide him moral support and conduits for more arms and aid as Putin continues to demolish the military assets. What impact will these make remains to be seen?

Sanctions have been the preferred instrument of the liberal order. They have limited success. Russia this time has become the most sanctioned country in the world. This time the real weapon of the war is the exceptional force of the US and western financial might ranging across the spectrum including President Putin and his coterie.

Global good and commons will become have become casualties. Russians will be deprived of the Mc-burgers. Putin has also sanctioned Biden and Clinton and threatened with grave consequences should a third country intervened militarily aiming at NATO.

It is a given that several continental European countries have had cosy relationships and energy and economic interdependencies with the enemy to the extent of about 60%. Even a child on the street began to wonder what the fuss about Nord Stream 2 is.

While the US, with its shale reserves and oil exploitation, has emerged as the formidable player in the energy market it did not wish to see Russia being embedded among its ocean away trans-Atlantic partners, who have been feeling let down by US successive administrations. This time also the wide-ranging western sanctions had to exclude Oil and gas, Uranium and Rare earth so very essential for their survival and technological journey.

The rest of the world is reeling under the high food and fuel prices with rising inflation stressing the economies even more which were struggling to cope with the downturn due to the pandemic. For how long the Europeans will be able to indulge in this mutual destruction syndrome is anybody’s guess. Then talks of the Sino-Russian axis in the Cold War 2.0 are not off the mark even as the Chinese are distancing themselves from the side – impact of the sanctions on Russia. Will a weakened Russia serve the purpose of global peace needs much greater and deeper analysis?

So, when the US spokesperson states that India will be on the wrong side of history if it buys oil from Russia or they are watching China if it tries to bail out Moscow, sound hollow and phoney, let alone dishonest. Noise for the hack of it driven by sheer blatant power may just scare away those who hold some affection for you. We need not go far back into history.

Mere two decades would suffice to confirm that unilateralism of the West led to mayhem in the Middle East. True one cannot cancel out one excess with the other or justify the war-driven carnage by either but then browbeating other countries for taking the right stand is bereft of any logic. Confidence in the security umbrella and invincibility of the superpowers is at stake as all of them do not have a bright history of victories to boast about.

India, UAE and China abstained on the UNSC vote to condemn Russia for its aggression. At the UNGA, 35 countries stayed away.US and others must read the tea leaves that status quo ante and ‘my way or the highway’ is just not good enough.

China and Russia have been sanctioned enough and understand the need for developing alternate financial structures to obviate the impact of unilateralism. India does not recognize the unilateral sanctions either but had been subjected to negative impact or the fear of Damocles’ CAATSA sword. Saudi Arabia has decided to sell its oil to China through Yuan. UAE has a similar arrangement. India and Russia have been used to the Rupee -Ruble trade for a long.

The old saying goes that you should not keep all your eggs in one basket. Currency swap arrangements, barter, trading in national currencies, alternate banking and financing instruments not going via SWIFT or Bretton Woods institutions, creating special purpose vehicles and localized capacities to mitigate the toxic exposure may be expedited as the US has charged Russia with its ‘Brahmastra’. This might unite several sanctioned countries or the ones who might come in the firing line often for no fault of theirs. Whatever be the outcome of this war, the world would have changed not for good.

First published in The India Observer Trigs or Track: Diplomacy Unwound – An Alternate Financial Architecture waiting is in the pipeline, on 20th March 2022