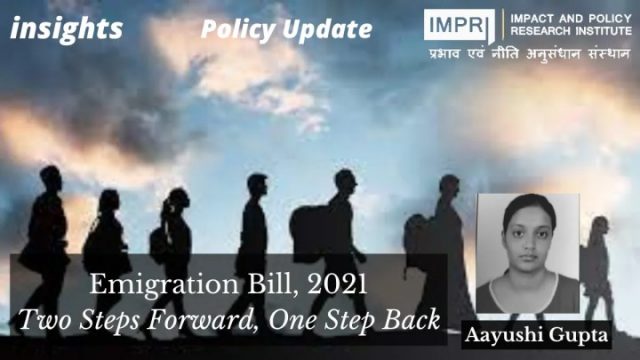 India, with its rich history of emigration and immigration, is the world’s largest source of international migrants. It is also a labor-intensive country with the largest diaspora around the globe. According to a United Nations report titled ‘Migration 2020 Highlights’, it was estimated that 1.8 crores of Indians live and work in foreign countries away from their homeland. As highlighted by several independent investigative reports, the Indian workers have witnessed grave exploitation overseas.

In lieu of this, the proposed Emigration Bill of 2021, seems like a well-timed opportunity to reform the process of recruitment for Indians intending to work overseas. Whilst this Bill is indeed a refinement of the hitherto Emigration Bill of 1983, which was passed by the Legislature as a direct response to the Apex court judgment in Kanga and Ors. v. Union of India, it still requires further improvement in order to guarantee effective protection to Indians working in other nations.

International labor migration encompassed within the Bill mandated hiring only through government-certified agencies, nevertheless, the power to overlook the same was in the hands of non-governmental recruitment agencies, who were steered by personal gains, and turned a blind eye to migrant welfare. Migrants also found it difficult to secure information with respect to their employment terms, often worded in a deceptive manner, forcing them to bribe the police to procure inquiry reports.

There were several instances at times, where overseas Indian missions were not conducting the investigation in an effective manner regarding the credentials of the company issuing the visa. There is no denying the fact that, though this Act has promoted migration, thereby harnessing domestic remittances, it has been ineffective in addressing the most pressing issue with respect to the welfare and safety of the Indians overseas.

Need of the Bill

Previously, the migration of laborers was governed by the Emigration Act of 1983, which set out a system for hiring through government-authorized agencies, be it private or public agencies. However, the proposed Bill, intending to replace the extant Bill of 1983, obligates agents to conduct due diligence on prospective employers, generates a review of documentation and travel process of laborers by the government, and imposes a capping on hitherto exorbitant recruiting fees. The Bill also entails provisions for enhancing the accountability and curtailing the exploitative behavior of middlemen and brokers involved in hiring laborers.

The proposed Bill is a welcoming move, especially for Kerala being one of the highest contributors of approximately 19 lakh migrant workers in the Gulf Cooperation Council nations. It envisions all-inclusive emigration management while providing for welfare committees as well, establishing a help desk and a three-tier institutional framework. The Bill envisions an all-inclusive emigration management system while providing for welfare committees and help desks as well. It proposes a three-tiered institutional framework.

In pursuance of a stringent regime directed against workers, traveling on tourist visas, or unregistered brokers, the Bill provides for the penalization of workers and even cancellation or suspension of their passports or imposition of a fine of Rs. 50, 000 in instances of violations. It also intends to establish an Emigrants’ Welfare Committee and Labour and Welfare Wing at the Indian Embassies and Consulates. Similarly, Sahayata Kendras will be established to administer issues with respect to the employment of Indian emigrants overseas and their immigration back to domestic waters.

Several Media reports have often highlighted the uncanny relationship between migrant workers’ deaths in the Gulf countries and its cause- health-related concerns- without any corroborative evidence. As per several media reports published in recent months, it has been observed how the majority of deaths reported in the Arab Gulf States/West Asia have been attributed to respiratory and cardiac issues, whose causes are still uncharted and poorly understood.

Years of exploitative practices have seriously impacted their welfare in terms of poor living conditions, underpayment of wages, deception and to name a few. In the current pandemic situation, low-skilled laborers in the Gulf countries have been quarantined in overcrowded labor accommodations with negligible water and sanitation, coupled with the government’s failure to intervene and evacuate such laborers. In most cases, their passports are seized by their employers, which is one such lacuna the bill aims to address.

Recruitment agents or the newly dubbed “Human Resource Agencies” (HRA) are important for emigration. There were 1,454 registered agents in India as of July 2020.  Despite the fact that foreign employers can engage in direct recruitment themselves, 91% of emigration happens through agents in India. They use their skills to estimate the demand for labor globally, engage in talks with foreign employers, choose apt candidates and facilitate their journey. Nevertheless, there were certain problems with the way their role was carved in the Bill.

HRA has been defined in the Bill under clause 2(m) as an “entity engaged in India in the business of recruitment for an employer…”. However, the bill fails to address the status of international or foreign recruitment agencies, that act as a liaison between foreign employers and Indian citizens. For instance, college students who get placed in foreign companies may have gotten recruited through these agencies. Since the ambit of the Bill only extends to Indian entities, will Indian emigrants recruited through foreign agencies be safeguarded or be treated as an extension of the foreign employer?

Another issue is with regard to the fee, often exorbitant, charged to the worker which is often specified to them at the time of registration. Most of them often have to pay a large amount of fees touted as service charges, travel tickets, etc. It is the duty of the HRA to specify the charges at the time of registration. While the Bill provides for punishment for collecting excessive charges than agreed upon, it still doesn’t mention an upper limit to these charges.

Under the Bill, the government has come up with the concept of ‘Sahayata Kendras’ to be established in order to address various Indian emigrant issues. However, no criteria have been specified as to in which countries these Kendras will be established, the bill can address this issue by specifying a criterion based on the population and vulnerability of Indian emigrants in a particular country.

Although, these measures are well appreciated and need of the hour, the Bill still falls behind on many human rights aspects. India, being a signatory to the International Convention on the Protection of All Migrant Workers, is duty-bound to protect the right to life of all migrants and their families, and ensure that neither a migrant nor his family member shall be subjected to inhumane treatment.

Clause 31 of the Bill provides that any person who emigrates in violation of the provisions will be subjected to a penalty of 50,000 rupees, as against only 2000 under the Bill of 1983. Moreover, the central government is entitled to revoke, suspend or cancel the passport of the emigrant, which may have the effect of infringing the right to life and livelihood of the emigrant.

The Bill could also have made some specific provisions in regards to certain categories of persons such as persons with specific physical disabilities and those of the third gender. Special care could have been taken for such persons, especially since many host nations may not be so friendly towards such persons. For instance, the Gulf countries have limited rights for persons belonging to the third gender.

It is observed that women emigrants are discriminated against on the basis of sex, and race and are vulnerable to sexual exploitation. Still, the Bill fails to address the special needs and demands of the female emigrants, despite the fact the Bureau of Emigration Policy has been established to organize programs and activities to address the same.

The Bill can take inspiration from our neighboring country Nepal, which in its Foreign Employment Act of 2007, prohibits “gender discrimination, lifts prohibitions on women working overseas, and establishes safeguards for women’s safety and rights”. Women migrants now have access to information about “the employer’s contractual obligations and migrant aid centers in their destination countries”. Additionally, in Laos, the Ministry of Labour and Social Welfare has made it mandatory for the emigration officials to be trained in issues dealing with women’s economic migration.

The proposed Emigration Bill is undoubtedly a step in the right direction, however, certain changes are necessary. The preamble of the Bill needs to be more progressive and can take a cue from the Migrant workers and Overseas Filipinos Act which states that “fundamental human rights and freedoms” of the Filipino emigrants are sacrosanct and inviolable.

Additionally, the Bill is silent on how to deal with the issue of migrants who go missing in the destination countries. The provisions are not gender inclusive and there needs to be “gender-sensitive policy formulation” keeping in mind how vulnerable women migrants are. Moreover, India’s reputation as an emerging developing country is bound to take a hit among the world community if such a domestic law is passed as it is in direct contravention of the aforementioned ratified conventions and international instruments.

These are some changes that should be addressed by lawmakers in order to have a more comprehensive and robust mechanism in place for emigration in India.

Aayushi Gupta is a Research Intern at IMPRI. She is currently pursuing her B.A. LLB (Hons.) from Rajiv Gandhi National University of Law, Punjab.