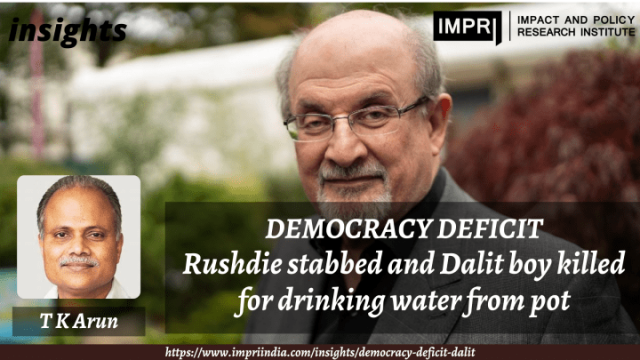 Two recent assaults, the attempted killing of Salman Rushdie in a New York town, and the killing of Indra, a small boy in a Rajasthan village, for daring to drink from his school master’s water pot, point to deep failings of Indian democracy, without addressing which Indians cannot hope to be truly free.

Why link to India, at all, the attack on Rushdie by the son of a Lebanese immigrant to the US, born and brought up in that country, apparently in response to a fatwa by an Iranian theocrat? And why link punishment for transgression of caste boundaries to democratic failure?

Iran’s then-Supreme Leader, Ayatollah Khomeini banned the Satanic Verses not after careful perusal of this literary offering, but after hearing of the book’s objectionable existence from news reports of the Government of India’s ban on the book’s import into India, in 1988.

Rajiv Gandhi, newbie prime minister, full of confidence in his appointees from his old boys’ network whom he had inducted into his council of ministers, and equally full of disdain for traditional Congressmen, whom he famously dismissed as powerbrokers, had serially appeased religious sentiments during his time in office. He passed a law to undo a court verdict that a divorced Muslim woman, Shah Bano, was entitled to maintenance from her ex-husband, in deference to Muslim protestations that such payment of alimony violated their religion.

This led to a backlash, and so his government opened the gates to the Babri mosque at Ayodhya, to permit worshippers of Ram at all times of the year, instead of allowing just a priest in to do the needful for the idols that had been placed inside the mosque in 1949, leading to the mosque and the idols inside being rendered out of bounds for the public.

Then, the Bofors scandal broke, and the ‘powerbrokers’ left Gandhi to fend for himself, with the help, such as it was, of his handpicked chums in the government. It was in this background that a controversy was created by some Muslim leaders against Rushdie’s book, Satanic Verses. Instead of defending democracy and the right to dissent and offend that goes with it, Gandhi ordered the book banned, for fear of creating law and order problems.

That book ban not just created news globally, prodding the Ayatollah to issue his fatwa, but also valorised ‘causing hurt to religious sentiments’ as a legitimate ground for infracting democratic rights, and the notion that the threat of mob violence by the intolerant should be met by state surrender rather than enforcement of the right to free speech.

Blasphemy is a capital crime in Islam. But India is a democracy, not an Islamic theocracy. Yet, politicians have incited mobs against individuals deemed insufficiently respectful towards their religious figures. Former Jamia Milia vice-chancellor Mushirul Hasan had been beaten up by student mobs incited by politicians, for not condemning Satanic Verses strongly enough.

Democracy is what offers India’s minorities their right to equal citizenship and the right to practice their respective faiths. Undermining democracy undermines that right and the protection that flows from it. Suppose someone founds a religion that calls for human sacrifice as a core religious tenet. Can that religion be offered the Constitution’s protection of the right to follow a minority faith? Religious practice has to conform to other norms of democracy for it to be eligible for democracy’s protection.

Blasphemy is something that sensible people of any religion would abhor and condemn. Blasphemy need not and should not trigger physical retaliation by offended believers. Countries that permit this, even if non-officially, like Pakistan, suffer broken states and dysfunction.

Indian society was a hierarchical, tradition-bound amalgam of diverse faiths, practices and people with vastly different levels of social/cultural capital, when a Constitution promising universal adult franchise, equality and fundamental rights was superimposed on it.

It takes a lot of organization and mobilization on the part of subaltern castes to empower themselves to assert their rights, against religiously sanctioned prejudice and discrimination. It takes sustained, broadbased growth to deliver people out of the wretchedness of poverty, to deliver on the promise of equality, at least of opportunity.

Nor is democracy just about a more equal distribution of material, social and political power. Democracy is also about a social sensibility, in which individual ethics and morality take into account the needs of others, a realm normally assigned to religion, but needs to be incorporated into a political society that aspires to thrive even in the absence of religion, even as it is not hindered by any religion either.

It is the failure to build democracy and secularism so conceived, in the decades after Independence, that explains caste atrocities, appeasement of ‘religious hurt’ and the focus on formal processes such as elections, at the expense of substantive democracy.

This article was first published in The Sanjaya Report as Rushdie, the Dalit boy killed for drinking water from his teacher’s pot, and Democracy Deficit on 17 August 2022.