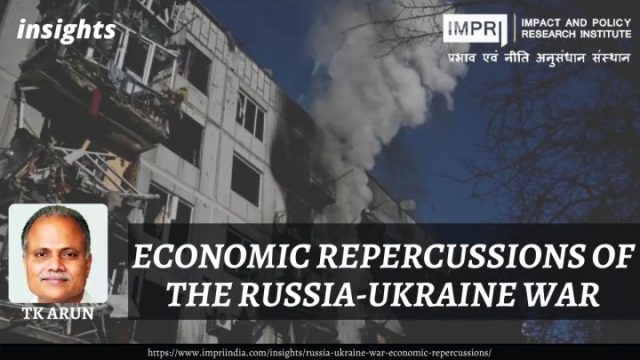 How will the war in Ukraine affect the global economy and India’s growth? Higher energy prices, higher food prices, higher yields across the board, flight of capital from emerging markets, and slower growth are the obvious threats. If Ukraine does not agree to accept the neutral status Russia seeks and abandons its plan to join the West’s military alliance, Nato, the war will drag on till Ukraine accepts defeat, while the West keeps up its pretense that economic sanctions are a substitute for deploying its troops to push Russia out of Ukraine. That would derail global growth, hurt India’s exports, and hope for robust growth in 2022-23.

Oil prices have zoomed to a 14-year high to cross $130 a barrel, before trending down, although Goldman Sachs forecasts spot crude prices to touch $135 in the current year. Gas prices have risen 30 percent in Europe, following a threat by Russia to turn off the gas flowing to the continent via the Nord Stream 1 pipeline (that leaves the pipelines through Ukraine and Turkey still pumping Russian gas to the West). The US is shedding its abhorrence of dictatorship and negotiating with Venezuela’s sanctioned leader Nicolás Maduro to obtain Venezuelan crude to replace Russian oil, should the West block purchases of Russian crude. The beneficiary would be China, which would get Russian crude at a discount.

India, too, could get access to Russian crude, if it makes bold to buy Russia’s Urals grade oil, which many Indian refineries are perfectly capable of handling. So long as the West does not impose secondary sanctions on Russia — sanctions on any entity that deals with a sanctioned Russian entity — it is possible to deal with Russian oil companies. Even as several Russian banks have been sanctioned, cut off from dollar networks, some banks have been exempt to let Europe continue to pay for the gas and oil it buys from Russia. Secondary sanctions would make it impossible for Europe to pay for the fuel they buy and that would derail supplies.

China is the world’s biggest importer of oil. If it steps up the purchase of Russian oil, it would cut back on purchases from elsewhere, releasing oil for Europe to make up for Russian oil, should the Europeans choose to give in to US pressure to boycott Russian oil. Oil is relatively more fungible than gas: it could be moved around in oil tankers, provided tankers can be found.

Gas is trickier. The only way to transport it outside a pipeline network, which cannot be built overnight in the absence of a genie-like Aladdin’s, is to first liquefy it, fill the liquid into pressurized cryogenic tanks or containers for transport on LNG tankers, and regasify it at the importer’s end. Liquefaction plants and the regasification facilities, too, call for the genie’s services to be built in a hurry. Since Europe buys 40 percent of its gas from Russia, it cannot easily source that much gas from elsewhere, even if they are willing to pay a huge premium.

This need not affect the exchequer directly. Subsidy on petroleum products has been curtailed significantly, and there are no elections around immediately to inhibit the passing on of the higher import costs into retail prices that consumers pay. The impact on the exchequer would stem from higher interest rates and slower growth, curtailing potential tax collections.

When the level of risk goes up in the world, normally footloose capital flees back to the safety of home. As in India, in other emerging markets, too, foreign portfolio investors have been dumping local assets and going back to the US, Europe, and Japan, taking refuge in government bonds. The yield on 10-year bonds has gone up in the US and the EU. To the extent that interest rate differentials between the dollar and an emerging market currency play a role in shaping the exchange rate, this upward movement of developed-world interest rates puts pressure on emerging market interest rates to go up, too.

Price rises arising from supply disruptions hold economic theory, should not be squeezed out by higher interest rates. These higher prices must feed through, to force appropriate adjustments. Once these first-round adjustments have been made and the resultant price increases, including a rise in wages, begin to make themselves felt should policy rates be raised to squeeze demand and curtail further price rise. Theory and practice do not always match. In any case, higher interest rates and higher prices would curtail growth below what would have been possible in their absence. Nascent post-Covid recovery would be undermined around the world. That is bad news for everyone.

Ukraine is Europe’s food basket, producing lots of wheat, corn, and sunflower seeds. Russia is a major producer and exporter of fertilizers, besides metals like aluminum and titanium (the Ilmenite sand of Kerala, from which titanium is extracted, gets its name from the mountains, plains, and lake, all called Ilmen, in northwest Russia, where the titanium ore is found in abundance). Food prices were already trending high when the war began in Ukraine. With trade and shipping from Ukraine’s Black Sea ports disrupted and farming interrupted, global wheat supplies are likely to be impacted for two seasons. Fertilizer shortage would add to global food woes.

India has a silver lining in this, though. It has huge grain mountains to run down. Wheat stocks are at 33 million tonnes, against a buffer stocking norm of 14.5 million tonnes, including strategic reserves, for April. India can safely export 20 million tonnes of wheat, provided wheat of good quality can be found in Food Corporation of India stocks. FCI often stores grain in the open with just a tarpaulin to cover jute bags of grain piled up as large heaps. No one needs to work harder than the Sarkari norm for grain stored in such a cavalier fashion to spoil.

Higher wheat and corn prices would lead to a generalized rise in grain prices, and chicken prices, too. Curtailing Ukraine’s sunflower oil exports would make edible oil prices rise, apart from crude oil prices. That would feed into food inflation. The RBI would be forced to increase its policy rates faster than it had planned to.

As foreign portfolio investors exit stock and bond markets, stock prices would tank and the yield would go up. As the RBI sells dollars from its reserves to meet a sudden surge in dollar demand, it would suck rupees out of circulation, pushing up interest rates.

India would do well to press the case, in whatever manner possible, for Ukraine to accept a neutral status, like Finland or Moldova. Reuters has recently carried out a report on Moscow’s reiteration of its terms for the cessation of hostilities: neutrality, recognition of Russian ownership of Crimea, and recognition of Luhansk and Donetsk as independent republics in the Donbas region. Notably, the Russian demand does not include a land corridor to Crimea from Russia that would have included key Ukrainian towns and regions that have been captured by Russian troops.

These are terms that Ukraine can accept, in return for security guarantees from Russia. India should urge the US and Europe to abandon their effort to extend Nato to Ukraine and deploy Nato missiles and troops less than 500km from Moscow. The range of a short-range missile is 1,000km. Ukraine under Russian occupation would mean Russian short-range missiles stationed in Ukraine having major European capitals under their constant gaze. A neutral Ukraine suits both Europe and Russia, security-wise, and, in terms of economic implications, the world.

First published in The Federal Economic consequences of the war in Ukraine on March 9, 2022.