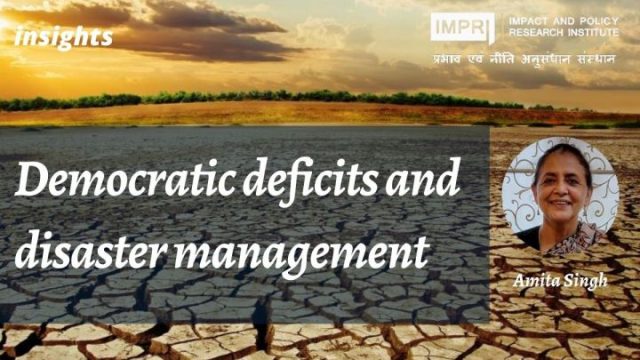 Substantive democracy led by ethics and the spirit of the Constitution is a flywheel of governance. After the suspension of 12 Rajya Sabha Members on the first day of Parliament’s winter session for the rest of its session, it is more than obvious that institutions of governance suffer from a culture of democratic deficits. That, Parliament is becoming a platform for reprimanding opposition, bowdlerising debates, pecking into question hour and using available disciplinary authority in a repressive manner hounds the Constitutional spirit.

In sharp contrast to Subramaniam Swamy’s expulsion on the basis of a detailed report on his alleged anti-national activities produced before the House in 1976, the current expulsion with short liner allegations and that too from a previous session appears monkey business. A right to speak, be heard and debate within Parliament represents the strength of this apex national institution as a repository of freedom and aspirations of people. Anything other than this can prove to be suicidal to policy formulation especially in the management of disasters which is currently the highest priority besides being indispensable to achieve Sustainable Development Goals by the year 2030. Crisis incidentally, overlooks procedures for the demand of speed and efficiency but this cannot escape the hawkish eyes of a belligerent or cantankerous opposition in the Parliament. Any disproportionate use of disciplinary authority will provide a cover to all illegalities, diversion of funds, human insecurity and rise of surreptitious developmental mafias in disaster-affected zones where it would not be easy for the country to escape its catastrophic impact for a long time to come.

Democracy and disaster management are Siamese twins and this relationship rests on five pillars of disaster management, that is, (i) participatory decision making; (ii) transparency of aid flows; (iii) financial safeguards; (vi) transparent procurement and contracting; (v) Project monitoring, evaluation and feedback. Disaster management may turn into a bigger disaster if complaint handling mechanisms fail to resonate in the Parliament. In our emerging concern for Parliament’s democratic deficits, one need not be complacent to phenomenal challenges that besiege disaster management in the country’s larger governance. In a 2015 report of the European Bank for Reconstruction and Development, it was found that a 10% increase in the per capita amount of disbursed funds leads to a 12.2 % increase in corruption. However, the disaster led fund transfers are much larger and therefore, offer a wider scope for corruption. This aspect is of particular interest in the kind of governance that weaker democracies suffer in non-tax transfers such as relief from national and international organisations.

The real source of democracy comes from community-based organisations such as the Panchayats in rural areas or Municipal Corporation in urban areas. At this level, tolerance to undemocratic measures is the least, reactions are mostly direct and confrontation more united and lasting against the government. From the tribal protest against three controversial bills in Manipur that lasted 600 days from 2015 to 2017 with eight bodies of their young boys kept in the morgue to the farmers’ protest against three contentious land laws lasting 466 days, one can see that these results of a united agitation are impossible from those areas distanced from communities. There was intensive research that went behind a transformative governance framework suggested by the post-Tsunami Hyogo Declaration of 2005 for a community-based action in disaster management. Hyogo Framework for Action, as it is referred to, directed governments to focus on community resilience-building as a priority. It stated, ‘communities and local authorities should be empowered to manage and reduce disaster risk by having access to the necessary information, resources and authority to implement actions for disaster risk reduction.’ It is sad that grassroots slippages of disaster management policies have weakened action against disasters. During the 2018 Kerala floods most of the Panchayat members from Kottayam to Idukki and Munnar shared that even though some alerts in the form of red, yellow and green were being sent to them, they were unable to make any sense of it as no one had ever spoken to them or trained them to understand it. This deficit of mutuality and participation runs through the system up to the Parliament yet no government ever pays any heed to priority action needed at the ground.

How democracy replenishes community resilience building is to be understood by our various research visits to regions marooned in hopeless islands of corrupt governance. Around 2009, tea plantation workers of 14 tea gardens of Dooars in West Bengal lost their livelihood and were pushed into starvation and death. The estate owners had fled bag and baggage without anyone’s knowledge to escape huge payments to workers under the Tea Board Act 1949, Plantation Labour Act 1951 and Industrial Disputes Act 1947 leaving behind ageing and unproductive tea gardens. Since these workers had known no other skill but plucking tea leaves they did not know how to cope up with the sudden closure and absentee government. Our visit to their broken homes raised hopes that someone is reaching out to them, they started coming out in numbers during our evening discussion groups arranged in their villages. These meetings also brought out a subtle presence of mafias which helped garden owners to flee without notice after which they illegitimately started collecting relief funds, indulging in trafficking across borders and also becoming their despotic masters. Our meetings which had nothing to give them except sharing information, inadvertently enlightened them on the Constitutional framework and the laws to strengthen their conviction during depressive times. Their awakening helped to revive the inactive Tea Board, receive a more meaningful restoration plan within the Panchayat Act and receive livelihood guarantee under MNREGA.

During 2015-17 our team visited Sundarbans in West Bengal and some districts of Manipur. Despite much segregation and high vulnerability due to its geographical location, Sundarbans could display a vibrant community action. We could talk to people waiting in queue for seeking the benefits of the public distribution system and also those who were repairing their homes to prevent snakes and tigers from entering. The place was vulnerable to many forms of disasters but people despite poverty were prepared with their indigenous techniques and plans using the most basic equipment for early warning, human and cattle rescue besides grain storage for emergency use. On the other hand in Manipur, as we travelled through Churchanpur, Thoubal, Senapati and Tamenglong people flocked around us as they felt that the government officials were finally visiting them for a change. Even their Ward Councilors had no knowledge of their responsibilities and availability of developmental funds for their Ward. The communities over there had not seen any government official visiting them. There was a big dent between the Meitei led government and Kuki, Paite and Nagas outside Imphal. No one had ever spoken to them and they felt that probably a change of government at the Centre has sent this JNU fact-finding team to their villages. It was a coincidence but in the election that followed this silent suffering tribal abode kicked out a non-participatory government in their silent revenge. If some of these examples could be a lighthouse on the power of democracy, Hyogo Declaration would become a serious enterprise.

A participatory framework provides a unique opportunity to promote a strategic and systematic approach to reducing vulnerabilities and risks to hazards besides identifying ways of building the resilience of nations and communities to disasters. Now that the community of world nations has been taking Hyogo spirit through Sendai Framework (2015-30) on the adoption of measures which address the three dimensions of disaster risk (exposure to hazards, vulnerability and capacity) a need for an increased resilience-building rests on nation’s ability to protect democracy at every Constitutional layer of governance. No technology, internet-based information or e-governance can replace physical meetings and face to face discussions and learning. Yet, how could this be possible if representatives of these people are not able to air concerns in the State Assembly of the Parliament? There are Rules as strict as Rule 256 and Rule 259 of the General Rules of Procedure and Conduct of Business in the Rajya Sabha, but the Constitutional spirit behind the rules combined with the ethics of enforcement defines the manner in which these Rules are to be used against representatives of people.

Parliament is not a confidential Committee Room of the Intelligence Bureau or the Pentagon Boardroom but a microcosm of society where the government’s democratic personality and tolerance to Constitutional norms are most needed. If this tolerance is lost, there would be no time for multihazard disasters to inflict our country stretching beyond the government’s capacity to prevent or manage them. It is hoped that the government in its true wisdom realizes that the genie may not be released from the corked bottle.