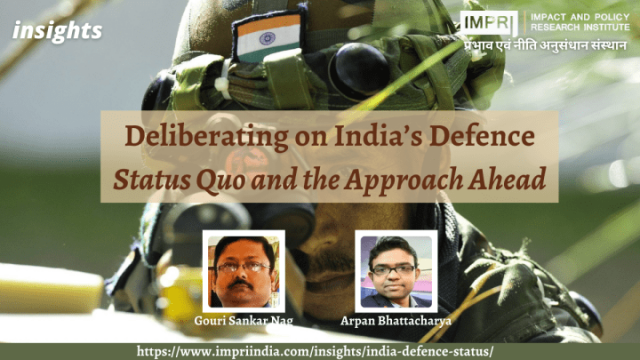 Assessing improvements in India’s military capability is difficult, particularly when it comes to the three armed forces securing their requirements in a timely manner. The nature of warfare is experiencing remarkable transformation in the last two decades. In the last few years, highly sophisticated technology and radical new doctrines have evolved. Besides, India’s security dynamics are complicated by numerous threats and difficulties at home and abroad as well.

It will necessitate the development of multi-domain skills as well as the execution of all of our operations simultaneously and in shorter time frames. The expansion and modernization of the Indian military have occurred in stages, primarily in response to threatening developments popping up in the surrounding region such as Indo-Pacific theatre, the belligerent posture of the Pakistan-China axis with Pakistan now more eager to exercise its tactical nuke option, and China’s pursuit of ‘string of pearls’ and the evolving global strategic environment prone to dent the perceptions and decisions of India’s strategic community and political elites.

The predicament was clear that as India’s military prowess and sinews of self-confidence grew harder, correspondingly Indian authorities were tempted to flex their military muscles, especially in low-intensity regional confrontations albeit the consequences of such acts did not always provide the desired effects. As the Indian Army strives to modernize, the exercise should not only confine to certain structural paraphernalia of institutional reform, rather it must take a robust and holistic approach to enhance its efficiency in sync with a new generation of digital calibration that can usher in a quality overhaul because large militaries are often handicapped due to slow pace of mobilization when not only rapid action but optimization of action viz. intelligence, interception and counter-strikes assume critical importance.

As technology advances at a breakneck pace, there is a constant need to adapt it in order to innovate and develop new systems creatively with the higher future potential of coverage and capability. Technology is influencing the platform of military response and accordingly system design is pushed through in leaps and bounds in keeping with both budgetary provision and the necessity of inducting finer nuances to meet up the emerging insecurities in a variety of ways.

Thus we think that not only up-gradation to more advanced systems but the development of new, highly competent systems like dual-use satellites, Unmanned Aerial Vehicles (UAVs) etc. are required to keep up our positive asymmetry vis-à-vis our prime regional adversaries. So for all practical purposes, we cannot focus away from the unparalleled rate of technological advancement taking place in the domain of military armament and supportive equipment. But that is not all. Rather we need to develop a deeper understanding of a comprehensive national strategy not only to embrace new technologies but also to map risks and how should we set out to educate ourselves about the emerging conflicts so that we can avoid falling into the traditional western notion or Clausewitzian trap in which “the focus is on the destruction of enemy’s army”.

Instead, we need a more rationally broad-based approach to put in place a more resilient system that the enemy cannot easily penetrate. Although easier said than done, it is the need of the hour, especially in the post-COVID-19 scenario which has rendered our infrastructure more vulnerable and that too with the probable return of after-shocks. Herein lies our lack of preparedness in comparison to China which is invariably prone to politically guided judicious action and needless to say, its intentions and resolve are pitted against India. So, as we step into the post-COVID world, we apprehend more risks than ever before that India would be called upon to respond, hence calling for a shift in our military doctrine.

To begin with, given the issues plaguing India’s security at the moment, particularly along her land borders, attention and resources need most likely be put on addressing immediate ominous signals for continuous and precise surveillance. It is critical not to lose sight of the long term while pursuing short-term objectives. Going forward, India must seek to ensure awareness of the adversary’s intentions in order to avoid scenarios like the current stalemate with China in Ladakh and given Pakistan hostility that renders the two-front war a high probability, the next slip in surveillance might be considerably more costly and perilous.

Second, warfare has experienced a paradigm shift in recent years. The dispute between Azerbaijan and Armenia, as well as the Israeli operation against Hamas in the Palestinian conflict, are recent examples of “changing patterns of war fighting”. According to EurAsian Times, a news portal, Israel claimed that its operations marked the world’s first use of Artificial Intelligence (AI). Even before the Gulf Wars and North Atlantic Treaty Organization’s (NATO’s) bombardment against Serbia in the Kosovo crisis and now aggressive Russian posture against Kyiv-all suggest that wars are increasingly fought with a preponderance of emerging technologies in the era of informationized warfare.

In this context, we also need to augment offensive capability along India’s western and eastern borders for which assistance of the Air Force is a must. So, we also need to take this lesson into account that we cannot deploy Air Force simply for defensive or precautionary or Humanitarian Assistance and Disaster Relief (HADR) missions. Rather free from bureaucratic hassle we should utilize our highly professional Air Force for proactive operations in different inhospitable terrains where enemy camps or terrorist launch pads as in PoJK can be targeted with laser-guided bombs to achieve sweeping results in one or two days that might have taken months of ground combat in conventional warfare.

Third, India’s lack of concentration on defence Research & Development (R&D) and low overall researcher density partly caused by brain drain has resulted in the country’s inability to create any significant breakthrough in military technology or weapon system thus far. According to Anil Ahuja and Arun Sahgal, India is the third-largest military spender and the largest or occasionally, the second-largest importer of global arms and military equipment. Defence technology investments are capital expensive and yield only long-term profits.

Only when exports, which give economies of scale, are pursued, while simultaneously meeting domestic demand, are such investments sustainable. In this situation, the latest defence reforms for Atmanirbharata or self-reliance and encouraging Micro, Small and Medium Enterprises (MSMEs) and start-ups instead of procuring from large United States (US) companies like Lockheed Martin should be viewed as an excellent chance to achieve increased indigenization without compromising cutting-edge defence needs.

The government has recently taken several highly pragmatic steps to strengthen the innovation eco-system, such as the Innovations for Defence Excellence (iDEX) and the Defense India Start-up Challenge (DISC). Besides the government has announced two defence industrial corridors, one in Tamil Nadu and another in Uttar Pradesh as ambitious projects to reduce the foreign dependency of the Indian Aerospace and defence sector.

Fourth, commercial high-speed 5G broadband internet services from companies like Star Link may be useful in defence, particularly for hypersonic missile surveillance and tracking, as well as prolonged Intelligence, Surveillance, Reconnaissance (ISR) operations over vast distances. The vast possibilities of using Artificial Intelligence and Data Analytics approaches in system design, maintenance and support must be investigated by the local industry. This necessitates the preparation of a national comprehensive plan by the Indian Armed Forces to embrace new technologies, thereby putting greater emphasis on educating its soldiers to master them.

Sixth, self-reliance in defence necessitates the development of a powerful defence industrial complex that constantly monitors and keeps up with evolving technology in order to deliver the best possible solutions to the defence forces. The quick pace of scientific and technological advancements has ushered in a slew of new technologies that R&D organisations and industries are continually adopting to rebuild and develop more sophisticated systems and greater capabilities to tackle new threats. The initiatives by the private sector in partnership with the Defence Research and Development Organisation (DRDO) and Defence Public Sector Undertakings (DPSUs), to design and develop subsystems and technologies for huge and complicated projects, have also gained traction.

However, the DRDO and the production agencies suffer from a ‘concocted’ project management approach, in which they are unable to separate the ‘strategic’ from the rest. Because they have been operating as separate entities, defence science and technology and industry face integration challenges. While the DRDO is a technology pioneer, its interaction with government production agencies (DPSUs) is minimal at best, and its interaction with the private sector is non-existent.

As a result of the preceding discussion, it is clear that the idea of Indianizing the military has not been transformed into actual action plans based on a stated strategy. As a result, developing a national policy on defence synergized by scientific and industrial basis is still in semi –matured state. The government’s attitude regarding the private sector’s ability to create cutting-edge military weapons is characterized by a lack of trust and scepticism.

In the last three years, the number of ‘make’ projects (defence projects done by the Indian private sector) has been fewer than 5% of the overall procurement projects awarded by the Ministry of Defence to the private sector. The Indianization of India’s hard power does not provide adequate evidence of a rising power. It is time for the government to launch a new national comprehensive plan based on trust and interconnectedness in order to meet the technological understanding for keeping its place in the world.

Subjective perception, which is impacted by prejudice and misunderstanding produced mostly by a lack of information are other factors in the development of trust. As a result, information and the ability to comprehend precise information are critical in establishing confidence. On the other hand, trust is characterized to some extent as closing the gap between words like “strengthening collaboration” and acts, as well as the consistency between specific and general matters in the direction of true cooperation.

The government’s initiatives for restructuring of the Ordnance factories, boosting of private agencies and facilitation of strategic partnership are undoubtedly indications of the dawn of a pragmatic realization. However, a successful policy cannot be biased towards modernization or self-reliance alone. Rather, competition is as much of form and sophistication as of finer military doctrine for superiority and manoeuvrings also.