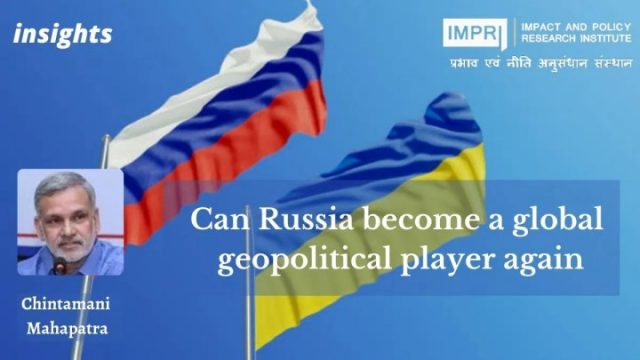 As the Ukraine crisis deepens with Russian recognition of Donetske and Luhansk, two eastern provinces of Ukraine, as independent republics, Moscow’s diplomatic skill and military prowess are clearly on display.

For weeks together, it was the United States that kept warning that Russia would soon be invading Ukraine and kept issuing threats of sanctions. Ukraine was less in panic than the Western world led by the United States.

By shifting the Embassy staff out of Kyiv, and advising the citizens to leave Ukraine, the United States and its allies kept on painting a picture of an imminent Russian invasion. Many other countries followed the footsteps of the Biden Administration in this regard. But Russian President Vladimir Putin appeared cool and worked as an ace strategist. He kept assuring the world that he was not going to launch any military invasion of Ukraine.

As days and weeks passed by, frenzied diplomatic activities with Russia involving the US, France, Germany, and Britain spread out, and even the stock markets around the world went into red in response to the uncertainty surrounding Ukraine. Russia, however, appeared satisfied only with a show of military muscle along its long border with Ukraine and even began military exercises with Belarus also shares a border with Ukraine.

Even as the US and the European Union dangled the threat of severe sanctions against any probable military move by Russia, President Putin acted smart, and instead of undertaking any direct military invasion of Ukraine, recognized the two separatist provinces as independent republics.

Putin’s action was a bolt from the blue for the United States and its NATO allies as well. Earlier, the Biden administration had sent a few thousand troops to Poland in response to persistent Russian military exercises along Ukrainian borders. But President Joe Biden had given clear instructions against using these forces against Russian troops if there was at all an invasion on Ukraine. What were those American troops doing in Poland then? They were there as part of an effort to defend NATO (North Atlantic Treaty Organisation) territories. And Ukraine is not a member of NATO, unlike Poland!

Thus Russian “recognition strategy” did not invoke any immediate imposition of “severe sanctions”. As expected, the Biden administration could not remain a silent spectator. So, the White House took prompt action, and imposed some sanctions, but only on the two new republics that received Russian recognition. For the time being, it appeared as if Putin has foxed Biden.

It is expected that more sanctions would be forthcoming against Russia. Wide condemnation of Russian recognition of Donetske and Luhansk by the United States, NATO members, the European Union, and Japan was predictable. It is portrayed as a violation of international law, the Budapest Declaration, and Minsk Agreement. Some went to the extent of describing it as an attack on Ukraine’s sovereignty and territorial integrity.

What is of utmost concern to the United States and its allies is Putin’s decree to send troops to those two provinces and describe them as “peacekeepers”.

Putin did that to deter the Ukrainian military from using force against the “new republics” recognized by Russia. And the Western powers consider it as almost wars by other means. Russia now claims that troops are being sent in response to invitations from those “republics”, the Western powers dub it as bland military intervention.

Future action by the United States and its NATO allies will, of course, depend upon their understanding of the situation in Eastern Ukraine and the Russian role in it. But there is little doubt that President Putin is well prepared for it.

Given his clout in domestic Russian politics, his belief that the Soviet disintegration in the 20th century was the worst humiliation the country has faced, and the perception that Putin is determined to avenge that humiliation makes it clear that Russia is unlikely to budge from his recent action leading to the territorial division of Ukraine.

The strong Russian measures in Ukraine came months after his recent failed efforts to negotiate a deal with the United States to prevent any further eastward expansion of NATO, especially Ukraine’s membership in that alliance.

Some legislators and analysts in the United States appear to have understood the Russian threat perception from an expanding NATO. But others underline the threat perception of East European countries from Russia, especially after Moscow annexed Crimea and before that intervened in Georgia and supported the separatists in South Ossetia.

However, there are procedures for becoming a member of NATO and Ukraine has not yet qualified for that. After the latest move by Russia, the big question is whether the US in such circumstances would seek to make Ukraine a member of NATO?

Putin is described as authoritarian, but there are many other authoritarians around the world who are friendly to the US. Second, Russia continues to be a nuclear weapon power with an overkill capacity.

Third, Russia is also an energy superpower. Sanctions beyond a point will negatively impact energy security in Europe that buys a considerable amount of energy resources from Russia. Finally, NATO cannot be as united as it was during the Cold War under the new circumstances of the 21st century.

It simply means that the old type of Cold War can be strongly discounted in the present circumstances. Instead of a prevailing war of words, what is appropriate is the Indian stand on the issue to peacefully resolve the issue through dialogue and diplomacy.

Both the US and Russia are India’s strategic partners. India cannot remain non-aligned in the traditional sense of the term in the current standoff between Washington and Moscow. Both Biden and Putin would expect India to take their sides. But India’s options are rather limited, though its advice is not only just ideal but also relevant and just.

Moscow has expressed its desire to negotiate further, but the outcome is unlikely to be satisfactory at the moment. The Ukrainian pot will keep boiling for quite some time. India and other countries will have to face the consequences.

It is to be seen how the Russian strongman Putin and the politically vulnerable American President Biden negotiate a mutually acceptable deal.