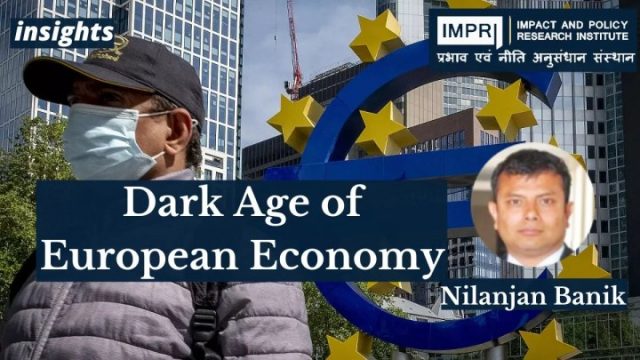 “Europe, the land of easy mathematics where he who works adds up and he who retires subtracts. The land where the economy gets to stagger all over the continent.” — Catalan writer and translator Núria Añó.

Last week, I had a chance to visit the Baltic region in Europe for a conference. My destination was Lithuania. Once part of the erstwhile Soviet Block, Lithuania still has a large population that speaks Russian.

While the buildings and the architecture in the country reminds one of the old Soviet era, somehow I got a feeling that its people don’t like Russia. They hold Russia responsible for the present-day economic hardship that their country, alongside other countries in Europe, is facing.

It’s hard to find a job while inflation is going through the roof. According to my cab driver, what used to cost EUR1 for a ride between the airport and the hotel now costs around EUR4. I could sense a deep concern in his tone.

A quick look at the euro area annual inflation data confirmed it. The euro area comprises 19 different countries in Europe, including Lithuania and Finland.

Petrol is retailing at EUR2.02/litre, which translates to INR190/litre. Still, Lithuania is considered to be a cheaper country in the Baltic region. For instance, petrol costs EUR2.46/litre at Helsinki, Finland.

Europeans are not used to such economic hardships. During my earlier visits, I had seen local residents proudly speak about the social-security programme and how the “welfare state” (that is the government) was taking good care of their well-being.

To understand the social-welfare system in Europe, we will have to first go back a bit into history.

Where the system falls short

Soon after the World War II, when Europe was devastated, policymakers wanted to rebuild it on the premise of socialist capitalism. The underlying idea is that when the market is at a nascent stage, the state will ensure that a labour market comes into play and jobs become available. The elderly and unemployed will be taken care of by the state through a benevolent social-security system by paying unemployment benefits and pensions.

The objective, indeed, is noble. But these are big expenditures, and hence to make the system efficient, the government has to ensure that it collects enough through taxes to pay doles and pensions.

At the time of a recession or war, when businesses are down, energy prices are high, and agricultural output is weak, tax collection will be inadequate to fund such expenses. Remember, a bulk of edible oil and wheat imported by Europe and some countries in Africa used to come from Ukraine and Russia.

Almost 40% of the total energy demand in Europe (especially natural gas) was met by the Russians. Sanctions on Russia since the beginning of the war have affected the supply of natural gas. And a substitute for it is the pricier US energy (both natural gas and gasoline), which means Europe has to shell out more.

This means an aggravating budget deficit for the European governments. A higher budget deficit can be sustained only if the economy is growing. However, economic growth is continuously falling in the eurozone. As per July 2022 estimates, the annual real GDP rate (gross domestic product) in the euro area is expected to fall from 5.4% in 2021 to 2.3% in 2022. Government debt as a percentage of GDP rose from 83.8% in 2019 to 96.4% during the first two quarters of 2022. Higher energy prices because of the war are likely to push the deficit higher by another 2%.

Besides the war, the lack of institutional reforms has been responsible for a gradual rise in government deficit in the Euro region. In a socialist capitalist structure, wages are protected by trade unions irrespective of labour productivity and companies’ ability to earn profit.

Further, Europe’s ageing population is likely to grow further in the future. To maintain a stable population mix, on an average every woman should give birth to 2.1 children, assuming the average death rate applicable to the world population. In contrast, the same is much lower for some economies in the eurozone — 1.38 children per woman in Greece, 1.39 in Spain, 1.41 in Italy, and 1.94 in the UK.

In Spain and Greece, citizen aged above 65 will be a quarter of their total population by 2030, up from 17% now.

Europe has fewer younger people to work and to pay for the expensive welfare programme.

A natural solution will be to reform the labour and pension laws (dubbed as austerity measures) and slacken the immigration laws. But, if the poll results are any indication, it seems the voters in Europe do not like reforms and would rather punish the parties that are in favour of austerity measures.

During the last two months, Europe has seen a rise in the number of labour agitations, starting with train workers in France and the UK, energy sector workers in Norway, and aviation workers in various budget airlines.

A closer look at European democracies suggests it is run by insiders including pensioners, trade union leaders, public sector workers, and big farmers. The ‘outsiders’ consisted of a small number of immigrants, youth, and small entrepreneurs who have little say.

But these ‘outsiders’ have now grown in numbers and they are facing economic distress. Income inequality is rising at an alarming level. Most of the migrants and even the natives have now taken up gig assignments such as food and grocery delivery. According to one of them, on an average they earn around EUR600 per month.

Initially, many in the West believed that Russia would suffer because of the sanctions. But data tells a different story.

Inflation has come down in Russia, and the rouble has never been this strong. It is appreciating, as Russia is now asking its counterparts in Europe and its major trading partners including India and China to trade in rouble. This is good news for Vladimir Putin as he can continue the war.

According to a British diplomat who had fled Moscow, Russia, being one of the largest producers of wheat (at 10% of the world’s total production) has enough to feed its population. China has also been stockpiling food grains over the last few years while the Indian government recently decided to restrict food grain exports.

While all these are encouraging signs for Asia and Russia, it seems that only a divine intervention (and not the US) can save Europe. As inflation keeps rising incomes fall, businesses will find it difficult to sustain in Europe.

The financial crunch is already visible. For the first time in my experience, an all-vegetarian meal was served in the economy class of the Delhi-Helsinki flight. As a non-vegetarian, I hoped that drinks would come as a respite. But then, you get only one small bottle of wine (around 180ml) these days and should pay for anything more.

This article was first published in The Economic Times as High inflation, low incomes, budget deficit: Here’s what is pushing Europe into an economic dark age on 22 July 2022.

A Reason for Celebration and Renewed Commitment| 7 June 2022

Digital Rupee: An Alternative to Quantitative Tightening| 21 May 2022