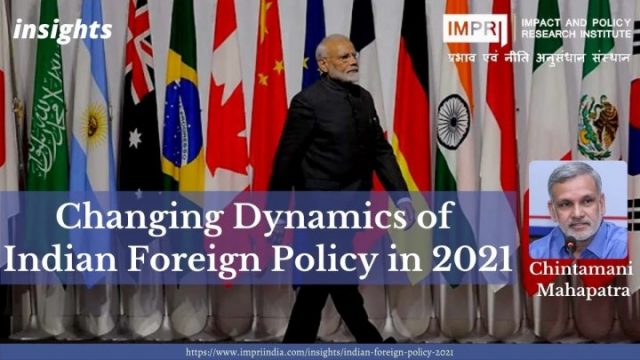 It is relevant and appropriate to take stock of the performance of government in various fields, including its engagement with the outside world at the year-end. It helps in drawing inspiration from the successes, learning from the difficulties, and preparing for years ahead in the least.

In this regard, the Indian Ministry of External Affairs must be bestowed with kudos for its proactive diplomacy, crisis management, promoting national interests, and being at the center of actions in bilateral, trilateral, quadrilateral, and multilateral activities in the world.

Despite the travel difficulties imposed by the coronavirus pandemic, India hosted many foreign leaders in Delhi for bilateral summits and meetings at other levels. The most significant and strategic bilateral summit that took place in New Delhi was between Prime Minister Narendra Modi and Russian President Vladimir Putin.

That India could succeed in organizing this in-person summit that resulted in an extension of the Indo-Russian defense cooperation agreement for another 10 years and supply of Russian S-400 missiles to India is a matter of national gratification. The Russo-Chinese strategic alliance and the US threat of sanctions against the S-400 deal failed to prevent the deal from going through and, in fact, the delivery of the missiles has already commenced.

India has also been engaging various major powers in trilateral forums, such as Japan-India-US; Australia-Japan-India; and India-France-Japan at both official and second track levels of diplomacy. One of the most important trilateral engagements at the foreign minister-level has been the Russia-China-India trilateral. The Indian foreign minister did have a virtual meeting with his counterparts in 2021 to promote, among other things, a multilateral world order.

India opposed the bipolar Cold War between the United States and the former Soviet Union and advocated non-alignment for decades. India emphasized the need to have a multipolar world even during the era when the United States was the sole superpower after the Soviet disintegration. And India continues to push for a multipolar world order when signs of a new kind of Sino-American Cold War are emerging in recent years.

What is striking is the triumph of Indian diplomacy in teaming up with Russia and China and developing a common worldview of the need to have a multipolar world order as opposed to a single-power hegemony. In addition to Russia-China-India trilateral, there is a pentagon of major powers forum spanning four continents called BRICS or Brazil, Russia, India, China, and South Africa.

India hosted the virtual summit of BRICS in September last and the member countries in a joint statement pledged, among other things, “to promote a more inclusive, equitable and representative multipolar international system with the United Nations at its center”.

Could India seek to promote the establishment of a multipolar order in the world, but settle for a single-power hegemony in the Indo-Pacific? Not at all. The world has witnessed the un-peaceful rise of Chinese power in recent decades. China, which advocated the theory of peaceful rise, began to assert its newfound power when the relative decline of the United States provided a propitious ground for it to do so.

China’s claim of sovereignty in vast stretches of the waters in the South China Sea and its assertion of the same by use of military force has not been the sole issue. China has been doing the same in the East China Sea and even along the Sino-Indian Line of Actual Control.

China used its military muscle through 2021 to expand its territorial claims but continued to use its financial wealth to expand its economic control over a large number of countries in the Indo-Pacific and even beyond. The consequences of the Belt and Road Initiative (BRI) of China are now well known, but many countries have already fallen into the debt trap and some others seem to be trying to extricate themselves out of it.

India has opposed both Chinese military adventurism and its predatory foreign economic practices. But the most notable development in this regard that happened in 2021 is the QUAD Virtual Summit where India was an active participant. Quadrilateral Security Dialogue had almost gone into a decade-long hibernation that was fortunately revived by US President Donald Trump.

Joe Biden, who defeated Trump in the 2020 US presidential election in a bitterly fought election and entered the White House in January 2021, took prompt steps to strengthen the Quad. In March, he convened the very first summit of the Quad member countries where the Indian prime minister actively participated.

The joint statement that was released after the summit did not even mention the word “China”, but the agreement among the members to work together in combating the coronavirus pandemic, securing the cyberspace, collaborating on emerging technologies, and ensuring safe and uninterrupted supply chains would go a long way in preventing Sino-centric and Beijing-controlled hegemonic order in the Indo-Pacific.

Another significant development that took place in 2021, of course, was the sudden US decision to withdraw troops from Afghanistan. In no time after the US and NATO troops left Afghanistan, the Taliban re-entered Kabul and took control of the government institutions and agencies. One of the victims of this episode was India that faced both economic and security challenges. A couple of trillions of dollars of Indian investments faced issues and then there was the dire possibility of Pakistan directing developments in Afghanistan yet again and recharging the terrorism machine.

India’s role in coming to help the Afghan masses facing hunger and starvation and, second, seeking to contain the spread of Taliban influence has been extraordinary. While Russia, China, and Pakistan were united in playing ball with the Taliban regime and advocating recognition of the Taliban and the United States was not in a position to address Indian concerns, India took its diplomatic initiatives to come to terms with the challenges.

India saw to it that the government in Kabul did not get international recognition until a broad-based governance system was in place, ethnic minorities were safe and steps were taken to prevent the Afghan soil from becoming the staging ground for terrorist activities.

India coordinated its policies with Iran and the Central Asian Republics and with Western and Russian intelligence agencies to contain and confront terrorism. The Delhi Declaration of 10th November was suggestive in this regard. Simultaneously, India provided thousands of tonnes of wheat to Afghanistan as humanitarian assistance.

One of the most serious challenges that confronted India was the perceived loss of its soft power when the second wave of the pandemic struck India. India faced acute shortages of vaccines at home and could not fulfill its intention to supply vaccines to foreign countries. The government was resentfully criticized by the opposition parties within India and other countries expecting delivery of vaccines expressed their unhappiness.

But the way the government tackled the vaccine issue by manufacturing in millions, vaccinating almost 60 percent of the population, and even exporting vaccines altered the image of India yet again and enhanced its power of attraction—soft power in the international community.

Thus Indian foreign policy in 2021 faced challenges from an aggressive China, the threat of terrorism in the Af-Pak region, loss of soft power, but came out successful.

As we enter the New Year, some of those challenges will remain. Indian diplomacy will have to be at work to promote a multilateral world order, a non-hegemonic Indo-Pacific order, and engage in economic diplomacy to achieve the goal of Aatmanirnhar Bharat. The goal should be to make India an economic powerhouse that would facilitate global economic recovery and equitable globalization.

First published in Firstpost 2021 Indian foreign policy: Looking back and then forward on 30 December 2021.