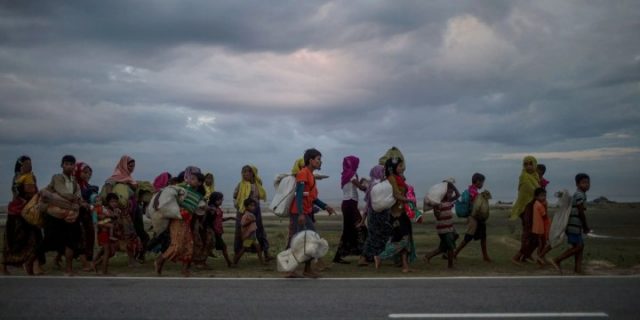 I want to begin by thanking Sadan and Pushpendra for putting together this wonderful new volume on what migration emotions entail in colonial, and postcolonial contemporary South Asia. This volume consists of fourteen erudite, and epistemically-grounded articles divided into four sub-sections that begin with describing the discursive production of freedom as a migrant narrative. Further sub-sections discuss how experiencing gender emerges through labour migration, and how emotional longing among migrants can be both constructed as well as deconstructed. The last section investigates the importance of urban spaces, memory, and how migration experiences re-create multiple belonging.

I would also extend my congratulations to the contributors of this volume for what is an important textbook and research intervention. This is a well-rounded academic enterprise that raises many thought-provoking, critical conceptual and historical questions.  After due diligence on various methods used hitherto for understanding migration, mostly from a policy perspective in South Asia, this volume investigates the social side of home-making that shapes memory-making and the poignancy of emotional longing for home. Sadan and Pushpendra begin the introduction of their volume by discussing the emotional nature of the migration journey that is defined by a feeling of foundational lack or loss, embedded within assumptions that normalize staying close to the vicinity of one’s home. The loss entailed in migration and uprooting, becomes, therefore, further entangled with losses entailed in politically systematic, and deliberate processes that impoverish citizens.

The normalization of living in the vicinity of one’s home may be seen as linked to an agrarian bio-materiality that roots persons in their family and community, and in their soil. This physical attachment is unmarked in emotional terms and is expressed instead, as resource ownership, memory ownership, and physical relationships of affect with locality, values, language, aesthetics, and food. Whatever the mode of individual departure from bio-materiality, the normalization of ‘staying close-by’ is dictated by the alienation of an elsewhere that is non-material, intellectual or skill-based – one’s job, that is learned, trained for, or desired and planned. Out-migration can, hence, also be desired – an adventurous breaking away from the stifling strictures of bio-materiality. Attachment and dis-attachment can be cyclical as well, experienced in stages that are age-specific, or contingent on reproduction – feeling one’s roots after one’s children are born.

This brings us to the question of emotional speech itself. Can experiences of impoverishment arising from migration, especially if it entails violent severance from bio-material resources, foster articulate speech? Or does it foster song instead, where subversive speech is rendered allegorical and symbolic within the conventions of creative and literary genres? Or when emotional speech assumes a call for political resistance and solidarity? Emotional narratives about migration are often retrospective and deliberate or recounted in the third person in a way that no longer potentializes the emotional danger of re-traumatization. And with this retrospection comes glorification, nostalgia, and Retrotopia (Bauman 2017) – a desire for a future that is actually a return to an idyllic, imagined past, marked by an absence of migration – when everyone, allegedly, ate off their own/ collective lands.

In retro-speech about migration emotions, the desire and indeed requirement of self-protection holds the inner potential to transform migration narratives into stories of compensation that recount conquest over adversity, pride about success, endurance of hardship, faith in a rewarding divine power, forbearance and strategic patience, hard work and endeavour. This speech involves narratives of resource building, about placing community members into the new labour market abroad. This is not just philanthropy and local patriotism or community and family loyalty; it is also a desire to build a migrant community abroad that transports the soil from back home through the bodies of its members. This builds a special home-soil abroad. This supra-layer of soil building hinges upon community alliances, fostering family and economic co-dependency, network, and sharing culture, language, festivals, and food with an aim to construct new alliances.

This also leads migrants to support a variety of cultural governmentality back home that promises to retain and protect a mutually-agreed-upon, pristine, imagined past, that is simultaneously, an imagined future. The future of returning to the past acts as a powerful panacea, that erases the present of migrants, while simultaneously retaining the importance of their present in symbolic ways. This serves an important function, since deliberate memorialization that has forgetting integral to it, discursively and politically produces the journey back home as a victorious ‘return’. Foundational loss is, therefore, not just a pervasive and poignant emotional experience that shadows migration; it is also a powerful political discourse of emotions that serves to partially conceal the gains that migrants make abroad.

Migration also confers conflict resolution to migrants and their families. Migrants build specially functional but precarious financial networks of resource transfer that evade and subvert differential legal and banking strictures on both ends of the transaction. That apart, the migrant also gains social status at home, which increases his decision-making power. He imports technological cultures of power that enhance and transforms everyday crafts back home into globally marketable products, that constitute tangible and intangible forms of migrant heritage.

The editors point to gender questions, of how exploring women’s history of migration in South Asia has highlighted the Partition. However, Partition is not the ideal example for studying shifting/ contested/ negotiated gender roles, since women’s experiences of Partition run the danger of re-essentializing gender and perceiving women as victims. Indeed, as many scholars of Partition demonstrate, women’s Partition stories are marked by gendered silence and shame. Violence re-shapes experiences of migration just as labour does, and the silence and shame of Partition violence again silences within-family or community violence. This silence speaks volumes, as it is a marker of honour itself when embodied by violated women, serving to project this violence into a political discourse that holds ‘other’ communities responsible (Butalia 2000). However painful the migration experience, moving away is often, nevertheless accompanied by opportunities that are concealed within individual stories that must be read against the grain of political narrative (Kaur 2019).

Iob (2017) for instance, describes the governmentality of post-Partition Pakistan as one riddled with personal, emotional negotiations clustered around small benefits. She describes instances of how migrants managed residential resettlement within urban areas or managed school transfer certificates into schools. And for many, as demonstrated by Nandy (2001), the Partition allowed rural-urban migration, rather than a cross-border one. The Muslim exodus to cities like Delhi from rural hinterlands, consolidated Muslim neighbourhoods in Delhi, and entailed a remaking and consolidation of the community’s resource base in a way that was far more intense than earlier bonds between a few Muslim families in rural spaces.

The power of migration also lies in its language, as the editors of this volume point out. It is language and genre that frames migration emotions, and here I would again hark to themes of gender and normalization. For example, Bollywood has forever extolled the erotic virtues of Pardesi chhaila Babus, which valorise patriarchal, virilocal marriage. Palriwala and Oberoi (2008) wrote about married women as migrants within the larger patriarchal structure of normalized virilocal marriage that renamed and reframed women’s solitary migration, by eroticizing it. The concealment or renaming of women’s migration is centrally embedded in the power of agrarian networks of ownership, conquest, and inheritance that are imbricated with imageries of war. The bridegroom procession resembles the quintessential war procession – the bridegroom on a horse, wearing or holding an open sword, his face covered in a veil of flowers that could be an armoured headgear. Accompanied with fireworks and drum-beats, a celebrating army of his camp members, he proceeds to conquer, accompanied by a pre-pubescent girl beside him on the horse – the goddess herself, who confers victory in war.

The editors ask the important epistemic question: what about the interim journey, and is that journey always unidirectional? Can multiple spaces not be inhabited simultaneously? And can identities, memory, and home-building not be defined by intersectionality and hybridity instead? Here again, I am reminded of Turner’s (2009) ideas of pilgrimage, border crossing and liminality, which builds a community of pilgrims on their way to a shrine. It is with the return of pilgrims, a journey in which they carry prasad and the blessings of the deity from the temple located outside physical boundaries, that accords them transcendental power. The power of the returning pilgrim evokes images of the returning NRI today, and of Lord Rama returning to Ayodhya on Diwali, accompanied by his reconquered wife. The power of the periodically returning, married woman-migrant to her natal home and family evokes equally powerful imagery that is seeped through with the nostalgia of a glorified childhood, playmates, toys, parental home, and an imagined past that was pristine and idyllic.

Sax (1991) compares the status of this returning married woman called the dhiyani in Garhwal to the goddess Nanda Devi, whose annual pilgrimage is also considered her visit to her natal home. Therefore, not all travelling, journeying, and spatial-social mobility is called migration. Linguistically, mobility becomes disaggregated from migration, from the moment it is renamed as marriage, job, education, picnic, holiday, pilgrimage, training, or the proverbial multi-entry US visa. All these words evoke different images, emotional possibilities, financial pre-requisites and rewards, organization and arrangements, aesthetics, and cultural concepts that reshape the journey to may or may not fit the migration paradigm.

So, what is the migration emotion? It is an important question for the volume, since as the editors say, all movements can be understood as migratory, and these movements are common in history. In my understanding, homelessness feelings constitute a powerful political discourse that function like an internet cloud. Being able to tap into this cloud is performative – it performs the Heimat, and confers power to migrants, helping them rebuild and simultaneously consolidate multiple belonging at home and abroad. The feeling and performance of migration emotions is afforded recognition and validation through the same bio-material discourses that normalize living close to home. Migration emotions are, hence, political emotions, and their recognition and validation confer migrants with a special power that discursively produces them as heroes and contests their gender status, turning men and women into saviours, akin to deities.

Butalia, U. (2000). The Other Side of Silence: Voices from the Partition of India. Duke University Press.

Nandy, A. (2001). The Ambiguous Journey to the City: The Village and Other Odd Ruins of the Self in the Indian Imagination. Oxford University Press.

Watch Deepra Dandekar share her views on IMPRI #WebPolicyTalk for the Book Discussion on Home, Belonging and Memory in Migration: Leaving and Living.