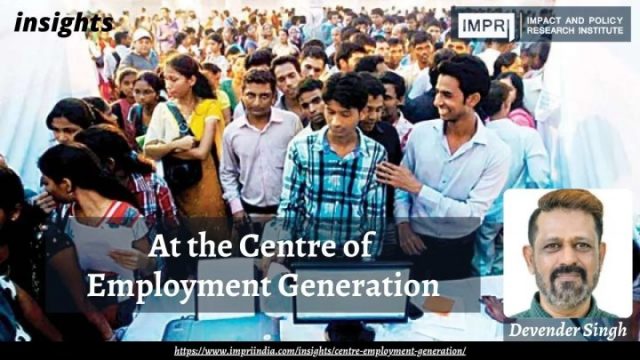 With his announcement that 10 lakh government jobs will be provided over the next 18 months on a “mission mode”, Prime Minister Narendra Modi sent four messages. One, the creation of employment is indeed a problem and can no longer be hidden from the public discourse. Two, the private sector, especially modern sectors such as the service and manufacturing sectors, which are dominated by multinational companies, have not created many jobs. e

Even if the Information Technology sector or the modern gig economy have created jobs, these are either very high-skilled jobs or low-skilled ones. Three, the government in the Nehruvian scheme of development occupied an important place in the labour market. The National Democratic Alliance (NDA) government, whose ideology is different and which often attacks the Nehruvian model, is now ironically forced to step in as persistently rising inflation, unemployment and underemployment threaten to politically affect it. And four, the NDA government has blown the 2024 general election bugle.

A populist announcement made by any government needs to be critically studied. Let’s look at some employment data. First, the last year for which we have information on employment in the organised sector from the Directorate General of Employment and Training is 2012. The statistics were provided under the employment market information programme. The NDA government is at present relying on the Employees’ Provident Fund Organisation/National Pension System/Employees’ State Insurance Scheme registrations and exits as indicators of the formal labour market.

This could be misleading as companies may be increasing registrations to cross the threshold to become eligible to fall under any of these. Hence, this might be more a case of formalisation rather than employment generation. Second, media reports show that more than 85% of those aspiring for those 10 lakh jobs could be consumed by existing vacancies in Central government departments (8,72,243).

The 10 lakh jobs creation also needs to be seen in the context of the labour market. Even though the labour force and workforce participation rates have increased marginally, there is a decline in the quality of jobs, viz. there is a rise in the unpaid segment of the self-employed and a rise in the share of the agricultural sector in total employment over the last three Periodic Labour Force Surveys (43% to 47%). This is a historical retrogression.

This huge mass of workers contributes, thanks to low productivity, to about one-sixth of our national income, which does not augur well for a healthy economy. On the other hand, the manufacturing sector’s share in national income has declined in 2020-21 (10.9%) compared to that in 2018-19 (12.1%). The decline in the manufacturing sector relates to total employment over the last three years.

Employment shares in the informal enterprises have increased — for men (71% to 75%), women (55% to 57%) and all persons (68% to 71%) from 2017-18 to 2020-21. Even though the share of regular salaried workers who did not have a formal employment contract, paid leave and eligibility for any form social security have declined for both genders, the level is still high. The government could score a point or two by showing that there is a declining tendency in several labour market variables. But an honest government would concede that the levels of several variables remained discomfortingly high even after three decades of economic reforms.

Role of the private sector

Even as the Nehruvian model of development is attacked in the current dominant political discourse, we cannot avoid placing the government at the centre of employment creation beyond a certain point. The private sector creates jobs in response to market forces and while taking into consideration radically altering technological developments. We cannot rely on the projections about employment generation by the gig economy. They are estimates computed by a trade body or by consulting agencies which have vested interests. As they are political economy agents influencing government policies, their predictions need to be read with many pinches of salt.

The job recovery stories, which are published from to time in the pink press, based on employment service providers such as Monster Employment Index, need to be seen in the context of a highly job-impoverished economy such as ours. Projects in the modern private sector consume a lot of capital to generate very few jobs. For instance, recently, there was a report that the Adani Group has invested ₹70,000 crore (or ₹700 million) in Uttar Pradesh to create merely 30,000 jobs. Foreign Direct Investment, which at any rate is highly capital-intensive, goes mostly into the non-manufacturing sectors.

Quantity and quality of jobs

Employment is not merely about numbers and growth figures. We need to concentrate on enabling the creation of decent work and a sustainable labour market to which India is committed as a member of the United Nations and the International Labour Organization. Wittingly or otherwise, the government’s role in employment generation has entered into popular discourse and discussions on policy formation. While even one job is a miracle, we need millions.

This article was first published in TheHindu as At the centre of job creation.

Read another piece by KR Shyam Sundar-Occupational safety for Labour: A Skinking Plot in IMPRI insights.