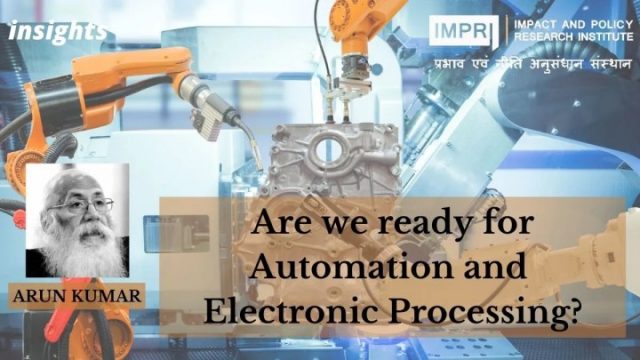 Automation and electronic processing via net are becoming ubiquitous. E-banking and E-commerce have gained wide acceptance in society, especially during the last two years when mobility was restricted due to the pandemic and periodic lockdowns.

Many, especially the young, are trading in shares and investing through the net. Crypto trading is entirely on the net – even youngsters who are not so well-off are into it. Identification via Aadhar is via the net. Income tax return is being filed electronically. Government is promoting digitization in a big way. Businesses in India are following through and moving towards automation and digitization. But is society ready for it?

Getting a passport, a driving license, paying a fine for a traffic violation, etc. are now possible via the net. Some feel that this has reduced corruption. Theoretically, this should displace the middle man who is often a conduit for the bribe to be paid to the officialdom during public dealing.

All this sounds great but has it simplified the life of the average citizen? Many educated Indians are still afraid of automation since they are unable to cope with it. It is an unknown and they fear making a mistake.

I have been a science student and first used computers in the mid-1970s when we had to learn Fortran and use cards. Time had to be booked for the use of the then biggest computers, IBM 370. Now hugely better computing power is available on the desktops and the tiny mobile phone.

One can instantly do one’s work. In 1986 I started using a desk top when it used the five and quarter inch disk with two drives. So, I am quite familiar with the use of computers and the internet and I am not afraid of using it. Yet, my life has got complicated since much time is wasted because often the systems are poorly designed and not user friendly. Efficiency should have meant that the citizen saves time and effort.

My own recent experience suggests that automation and digitization are taking up more and more of time, leaving less time for the useful work that one is required to do in life. Let me list some of the recent cases that compel me to write this piece.

1. Most recently, Insurance claim under Mediclaim for hospitalization was only partially paid even after prior approval was granted. For the rest, I was told that I have to file separately after paying cash. This defeats the idea of cashless payment and ease of working. The entire paperwork has to be done again. To begin with, getting cashless payment approved required much running around so that admission was delayed. The same thing happened at the time of discharge which got delayed by hours.

2. A payment of instalment to ABSLI was due on March 31. I had not opted for automatic deduction of instalment from my bank account knowing that things can go wrong. On receiving intimation from the company I made the payment vide credit card and as matter of abundant caution informed the company and the bank through which the policy was purchased.

To my horror, on the due date the instalment was again deducted from my bank account. I informed the concerned people that the instalment has been deducted twice and one of them should be refunded. To my utter surprise, a week later, I received two refunds. Again I informed the relevant persons that this has happened. But, I started receiving notice from the company that the payment is delayed. It took 15 days and repeated calls to rectify the situation. To my disadvantage, it will be treated as a delayed payment and I lost interest since the deduction was made by breaking a FD automatically.

3. One day suddenly a policeman came to the door to serve a court summon. He did not know what it was for. When I asked if I could settle it on line he said that was no more possible. On checking online, it appeared that one and a half year back it was noted that my car did not have the new high security number plate. No intimation of this was ever received. So, now, one day would go in court appearance and payment of the fine.

4. Regarding the income tax return filed the preceding year, I received a notice that certain deductions were rejected and that additional tax needs to be paid. On filing an appeal it was reversed after a few months but much time was wasted. This was not the first time that such a thing has happened. Electronic filing and faceless scrutiny of returns sound great but chartered accountants are a worried lot since getting rectification of orders is not easy. Also, the nation seems to be headed towards much litigation.

5. I have been in the process of having property transferred from my mother’s name to my name after her death. For the transfer of shares considerable harassment was caused by various Registrar &Transfer Agents (R&TA). They all claim to work and respond to queries via net but actually they do not and want hard copy of everything. They also do not inform all at once their requirements and over time ask for more papers. So, at times even after a year and a half and submission of papers several times, the process remains incomplete. A few examples would clarify what I am saying:

6. I do not pay GST but most small businesses and the Chartered Accountants are pulling their hair out given its complexity. It is entirely digitized via the net but it is proving to be difficult to handle. Any number of court cases have come up and many fake firms have emerged to claim fake input credit. Many small businesses have closed down as a result of the difficulties.

The above points to the time taken up. But more importantly, attention gets diverted from one’s work. So, it is unclear how much efficiency has been brought about in life as a result of the automation and net based instant communication? When this is the case with me who is computer literate and not afraid of using it, I wonder what it must be for most senior citizens and large numbers of those who have little education and are intimidated by the idea of using computers to do their work.

Getting a passport and driver’s license has indeed been simplified for the net savvy but it is not so simple for those who are not net and computer savvy.

Apart from the problem of people’s aversion to using computers and net, the systems are not properly designed. Digitization theoretically sounds great but for it to work, rules have to be simplified, citizens need to be trusted, unnecessary paper work eliminated (like the need for notarized affidavits) and systems designed to be user friendly.

This article was first published in HW English as Idiocy of Automation and Electronic Processing: Are we ready for it? on 26 April 2022.