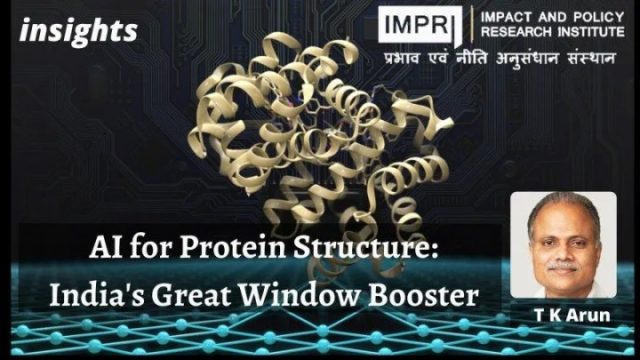 DeepMind, an artificial intelligence subsidiary of Alphabet, Google’s parent company, published, on July 28, a free, online database of the likely shapes of more than 200 million proteins known to science. This has set off a virtual carnival of biomedical research, which will transform healthcare as well as research into basic science. India must join the party.

To most people proteins are vital nutrients, sufficient quantities of which must be ingested on a daily basis, to live a healthy life. This is broadly right, but lacks nuance, like defining galauti kabab as food. Proteins are the building blocks of life. Collagen, which makes up the structure of your bodily cells, is a protein, or rather collagen is many proteins. Antibodies are proteins. Hormones and Enzymes are proteins. Proteins allow muscles to contract and move. Haemoglobin is a protein whose job is to transport oxygen around the body.

A key function of DNA is to code specific proteins inside the cell. The Covid vaccine most Indians have taken, Covishield, is a DNA (contained in a harmless virus body), whose job is to ask our body cells to produce the spike protein of the Cornovirus causing Covid. This, in turn, triggers the production of another set of proteins, the antibodies that would attack and destroy the alien presence in the body.

DNA produces a messenger RNA to instruct the cell to produce the protein in question. The Pfizer and Moderna vaccines comprise the messenger RNA that carries the transcription command to produce the spike protein. mRNA is far less stable than DNA and that is why these vaccines require storage at ultra-low temperatures.

DeepMind’s protein database has already been used to identify a protein that would interfere with the biology of the Malaria parasite, and a Malaria vaccine with 70% efficacy has been rolled out.

DeepMind is the British company that produced the AI that beat the world champion in Go, an intricate board game popular in Korea and China. This was considered a far bigger computing accomplishment than the defeat of the then world chess champion Garry Kasparov at the hands (in a manner of speaking) of IBM’s super computer Deep Blue. Mastery of Go demonstrated the power of machine learning, in which the computer teaches itself new things from the data it accesses.

DeepMind developed AlphaFold, an AI that forecasts the likely shapes of proteins. It is not enough to know which amino acids go into the making of a particular protein. How these string together in what sequence to form what shape is vital to know how the protein would work.

So far, scientists have been using X-Ray crystallography to find out the shape of proteins. This is expensive and time-consuming. Of course, AlphaFold’s forecasts would need to be confirmed the old-fashioned way, but the time taken to confirm a hypothesis, already given to you, is far less than what is spent on forming alternate hypotheses and painstakingly ruling out the false ones.

The shapes of proteins will help decipher how a parasite works or how some pathogen produces disease inside the human body. That will guide production of proteins that would counter the harmful effect.

Alphabet has not tried to create any intellectual property right over its protein shape forecasts. It has, in collaboration with the European Molecular Biology Laboratory’s European Bioinformatics Institute (EMBL-EBI), created a free, searchable database that anyone can access.

India has a huge pool of biotechnology talent or people who specialise in chemistry, biology or computing who can be brought together to collaborate in teams to make huge advances in producing the next level of healthcare. Whether it is in editing genes directly or introducing proteins that would repair damaged building blocks of human cells or disrupt the metabolism of a pathogen, understanding, synthesising or repurposing proteins would play a big role. The AlphaFold database will be used by researchers all over the world.

India has the numerical edge in scientific manpower, also in the population cohorts coming of age and who could potentially be trained in all the relevant disciplines that together make possible the next level of healthcare.

Biotechnology labs around the world are full of talented Indian researchers. Jawaharlal Nehru University’s School of Life Sciences has, already, taken the initiative to invite some of these professionals to return to India and do their work here. This needs to be replicated on a massive scale, to not only build up a large pool of human resource but also create a work culture that encourages, rather than stifles, inquiry and innovation that could upset entrenched knowledge and authority.

Indian Institute of Science Education and Research already offers courses that combine disciplines such as biology and chemistry. They must develop curricula to produce the workforce India needs to move into the new frontiers of medical research.

Opportunity beckons that would make use of India’s demographic advantage: the largest cohort of trainable young people in the world. States can take the lead, and look to the future, instead of revising the past. India’s great protein opportunity.

This article was published in The Sanjaya Report as India’s Great Protein Shake on 14th September, 2022

Read another article by T K Arun- Women being the Scapegoat in Every War: The Release of Bilkis Bano Rapists in IMPRI insights

Read another article by T K Arun- Democracy Deficit : Dalit boy killed for drinking water from pot and stabbing of Rushdie in IMPRI

T K Arun, is a Senior Journalist and Renowned Columnist based in Delhi.