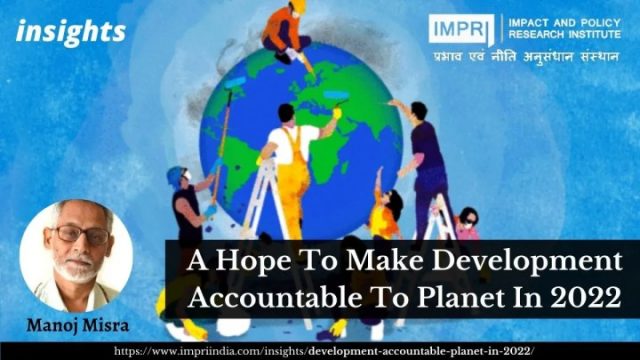 Earth is not increasing in size, nor is water on it. Oxygen both in air and in water is struggling. Forests, rivers and wetlands and wild plants and animals in them, commonly termed bio-diversity, are getting decimated at unprecedented rates, many even facing extinction. All three poles are hell-bent on defying expert predictions on the rate of ice melting.

IPCC reports despite political wettings are grim enough for the secretary-general of the UN to declare ‘code red’ for humanity. Extreme climatic events are not leaving any stone unturned to write dire warnings on the wall and in bold.

But the votaries of economic growth at any cost – euphemistically called ‘development’- remain blissfully toad-like in a warming pot. Business as usual reigns supreme with annual UNFCCC meetings utilized more as optical opportunities and exercise in one-upmanship as if the health of the earth is somebody else’s business. Glasgow 2021 was a classic case in point.

So in a scenario like above what could one put in one’s wish list for the ‘Environment’ in 2022?

There could not be anything simpler than climate change to fathom. Appropriately called ‘JalVayu Parivartan’ in vernacular it is about changes often perplexing that we are witness to in the state of our air and water and extreme events like forest fires, floods, cyclones and droughts in its wake.

Both high and low ambient temperatures are breaking records and making people’s lives miserable. Air conditioning of homes might no longer remain a luxury and rich man’s preserve.

So wish number one is a breakthrough technological innovation that brings home air conditioning to even the least privileged just like mobile telephony but is at the same time energy independent with no or low environmental impact. This can be achieved in two ways. One is in the design of homes and materials used in them. The second is through a massive public and policy investment in rooftop solar and storage technologies.

Wish number two is a national policy, law and action plan on climate resilience which makes the lives of climate refugees, whose numbers are going to skyrocket for us as a species, have already lost the bus to limiting global temperature rise below 1.5 deg Celsius, bearable.

It would take a blind or a die-hard surface water advocate to deny the fact that the nation’s lifeline was, is and shall ever be groundwater. Agriculture is the biggest user of water and it is a fact that despite India investing more than 4 lakh crore rupees of public funds since independence in the development of surface water infrastructure and storage in form of 5000 plus dams and barrages and thousands of km of canals crisscrossing all over the country it is primarily the groundwater that has remained the mainstay of our agricultural growth, year after year.

But since groundwater has been taken for granted its misuse in all economic sectors, not the least in agriculture, is rampant with implications that go much beyond just water misuse.

The key reason for such a sad and unfortunate state of affairs is the fact that groundwater has till date remained a poor cousin of surface water amongst the nation’s water technocracies and bureaucracies. This must change for the nation’s water security.

Wish number three is that the much-awaited National Water Commission (NWC) becomes a reality and groundwater is accorded its true pride of place in policy, legislation, regulation and research.

Any talk of economic growth is attractive. But how accountable is it to people and the planet? Especially in an era when people falling sick seems like welcome news to many in the business of making money and stocks continue to skyrocket while people keep losing their lives to the pandemic.

Wish number four is that all projects undergo full and fair environmental, social and equity assessments with a legal proviso that if they fail to deliver as promised then all those involved including project proponents, assessors and bureaucratic and political decision-makers would be liable to be asked to explain and in default face civil and criminal penalties.

Pandemic should be taken as a lesson

The greatest threat to the survival of humans as a species is not far to seek. Climate change is merely a symptom of a disease called the unsustainable ‘consumerist’ lifestyle of humans. The only silver lining is the fact that many human societies, often called indigenous or first people, are still leading relatively benign and low-impact lifestyles in different parts of the world.

Wish number five is a positive outcome of the Covid pandemic in the form of a weakening and final demise of consumerism as a dominant lifestyle. May the popular adage ‘jab aave santosh dhan to sab dhan dhuri samaan’ (all riches turn dirt once contentment reigns supreme) become the defining tenet of 2022?

First Published at The dialogue titled In 2022, Let’s Make Development Accountable To Planet on January 1, 2022.

Read another piece on Air and River Pollution titled “Delhi Winters Are Now About A Frothy Yamuna And Hazardous Air” at IMPRI insights.