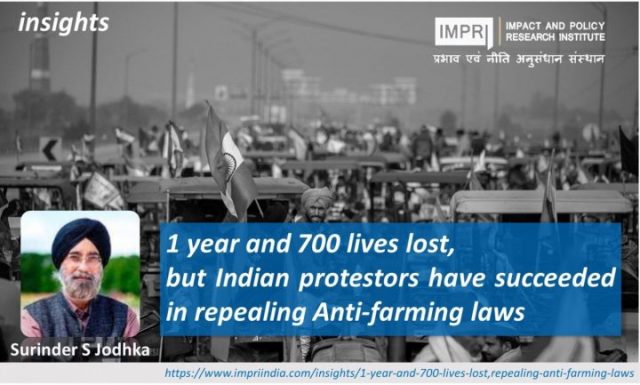 The announcement was made on the day of an important Sikh festival that marks the birth anniversary of Guru Nanak Dev, the first of the ten Sikh gurus. Farm leaders welcomed the move, but said the protests won’t end immediately. They say they will wait until the laws are formally repealed in the Indian parliament, and all their demands are met.

Remind me again, what were the farmers protesting?

Farmers in India have been protesting three new laws they fear will fundamentally alter their ways of farming.

The laws, passed by the Indian parliament in September 2020, would open the agricultural sector to active commercial engagement by big corporates. Corporates could purchase, store, and even decide on what crops would be produced. Hence, farmers fear the new laws will trap them into contract farming arrangements with corporate buyers.

Once the laws were passed in September 2020, farmers across India began to protest. In November 2020, a large contingent arrived at the borders of the national capital demanding a complete withdrawal of these laws and introduction of concrete provisions for secure incomes from agriculture through a state-supported system of price security.

The protestors were not allowed to enter the city. So they sat, occupying some of the main national highways connecting the capital city to the rest of the country.

Two of these sites, at the Singhu and Tikri borders, are spread over tens of kilometres along the highway, with nearly 5,000-10,000 farmers staying at each site at any time.

They have braved the vagaries of weather, a raging COVID-19 pandemic, and a hostile bureaucratic machinery and police force.

Nearly 700 among them have died in the course of these protests. In October, four farmers were killed when a group of protestors was hit by a convoy of vehicles in the state of Uttar Pradesh.

Four farmers and a local journalist were killed, and three others died in the mayhem that followed. The prime accused in the case is the son of a junior minister in the federal government.

India’s agriculture crisis, and the genesis of farmer unrest

Two-thirds of India continues to live in rural areas. A large proportion remains dependent on agriculture, partially or solely. However, household incomes from agriculture have been steadily declining.

The average size of land holdings have been shrinking over the years, with nearly 80% of them now less than two hectares. This growing stress has been visible in the form of steadily rising cases of farmers’ suicides, mostly because of their growing indebtedness.

The farmers’ desperation manifested itself in an unprecedented set of mobilisations, as we’ve witnessed in the last year.

How a hostile government was brought to its knees

The federal government had been largely hostile towards the protestors. But despite this, the protests have had significant political impact, especially in the states of Punjab and Haryana.

In Punjab, it’s now almost impossible for politicians of the federal-ruling Bharatiya Janata Party (BJP) to step out of their homes to address political meetings or organise events. In Haryana, too, though the BJP is also in power at the state level, the situation is similar.

The chief minister of the state has been compelled to call off public meetings because protesting farmers won’t allow his helicopter to land at the site of the meeting.

The federal government had perhaps expected that the farmers would run out of steam. Since January 2021, farmers had had no formal negotiations with the government. But the movement had been gaining momentum. Besides the sit-ins, they have been holding protest meetings, maha-panchayats, across the country, attracting massive support.

They have been particularly effective in the northern states of Punjab, Haryana, Uttar Pradesh and Rajasthan, as well as others.

Two of these are politically significant states – Uttar Pradesh and Punjab – that are set to go to the polls early next year. Given the damage these protests could have on the ruling party in the forthcoming elections the federal government appears to have decided to repeal the laws.

The farmers’ determination has been rewarded. Besides putting agriculture back on the national agenda, showing their strength as a political block, they have also managed to build new solidarities across castes and communities.

For the first time, women’s participation in agriculture, and in protest movements has been acknowledged.

This has perhaps been the longest protest movement of its kind in the recent history of India, perhaps, even globally. The protests, and its outcome, have become a source of inspiration for a wide range of political actors that wish to see democracy survive and thrive in India.

Their perseverance and grit has shown it is possible to mobilise and sustain political opposition against a powerful establishment.