Home Insights Why Shashi Tharoor Could be Hailed as the Real Winner of the...
Facebook
Twitter
WhatsApp
Linkedin
Email
Print 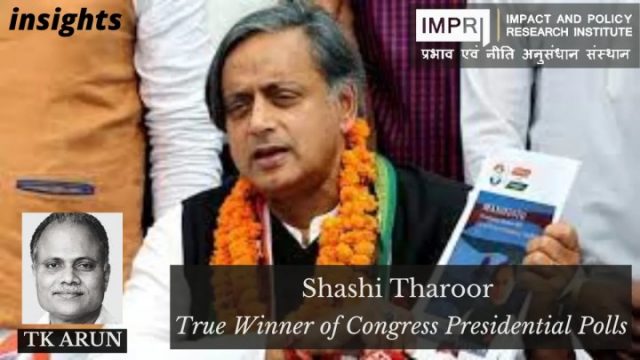 For Tharoor to continue on his path of assuming responsibility, he would do well to think through challenges with the help of veteran Congress leaders, rather than with the help of technical whiz kids who imagine excel sheets are capable of political imagination.

That Mallikarjun Kharge would emerge the winner in the Congress presidential elections had never been in doubt. Shashi Tharoor would be trounced, everyone knew. That Tharoor, a surprise entrant to the contest, managed to poll nearly 12 percent of the valid votes does him immense credit. More than a tenth of the carefully chosen All India Congress Committee delegates who formed the electorate chose to defy their choosers and vote for someone who was manifestly not the Gandhis’ nominee showing the party has a fighting chance of surviving in a non-Gandhi era.

Tharoor, arguably the most popular Congress leader outside the Congress party, is a novice in Congress politics. He was parachuted into the party as a Lok Sabha candidate in the 2009 Parliament elections and served in the archetypal role of the brilliant outsider who faces hostility from the party’s incumbent leaders but manages to do well. He is a non-entity in the internecine factional struggles of the Congress’s Kerala unit. He would probably be a bad loser in inner-party machinations.

Yet, by taking part in the election to the Congress president’s post, and securing more than 10 percent of the vote in that party accustomed to treating the Gandhis’ whim as its command, Tharoor has emerged as a serious Congress leader, whom the Gandhis or Kharge can ill afford to ignore, when it comes to forming the Congress Working Committee, for example.

On a personal level, what the contest has done for Tharoor is change his status. He has been serving as the Congress’ favorite performing monkey, reliably expected to deliver the much-needed ideological riposte to a BJP diatribe, play the sophisticate in front of an audience that demands it or provide proof that the party’s intellectual legacy has not altogether died off. After the election, Tharoor is now a politician of substance.

The presidential election was intended to choose a puppet who would occupy the designated office but defer to the wisdom of the Gandhis, on every decision — save, perhaps, on whether to offer his guests biscuits or roasted peanuts along with tea. After having borne the brunt of leading the party to an electoral rout multiple times, the Gandhis want someone else to take the rap the next time, even as ‘Prince Charming’ continues to function as the de facto leader — (Number) One Man, No Post.

Time to look beyond Gandhis

The Congress has come to rely on its central leadership for two things: one, appeal to a broad spectrum of voters pan-India and boost electoral success, and, two, settle state-level disputes among leaders so as to leave all factions reasonably satisfied/dissatisfied in their mutual equilibrium. Rahul Gandhi has demonstrated his inability to rise up to either task.

There is every reason for the party to look for a leader outside the Gandhi clan. But most of the party leadership is unwilling to step outside the familiar Gandhi turf. The Bharat Jodo Yatra gives many Congress well-wishers the hope that it would whip up some new enthusiasm for the party and its leadership. The long march is better than politics via Twitter, without a doubt.

But democracy in India faces new challenges: majoritarianism, public indifference to, if not enthusiasm for, redefining Indian nationhood as Hindutva, the irrelevance of Muslims as an electoral force (a consequence of a largish percentage of the country’s 80 percent majority community rallying behind a majoritarian program), tokenism gaining traction as a good enough substitute for concrete action, the importance of social media in determining the political discourse and its systematic abuse by the forces of majoritarianism, democratizing, rather than patronizing, social practice among religious communities, to name a few.

The Bharat Jodo march does not address any of these challenges. It merely serves to send out the message that Congress is available as an alternative to the BJP. That, however, might not suffice.

Tharoor – a Harbinger of Hope

For Tharoor to continue on his path of assuming responsibility when none had been offered to him, he would do well to think through these challenges, with the help of veteran Congress leaders, rather than with the help of rootless academics and technical whiz kids who imagine excel sheets are capable of political imagination and put forward new choices before the party. Kharge cannot be counted on to do that, nor the Gandhis.

Indian democracy deserves better than the principal Opposition that we have today. Tharoor’s successful entry into the major league of Congress politics holds out the hope the Opposition can become something more than a farce.

That still leaves us with one major problem. Who will serve as the Congress party’s next performing monkey?

At any rate, more power to Tharoor and his voters in the Congress presidential elections!

This article was first published in The Federal as Hail Shashi Tharoor, the real winner of the Congress presidential poll on October 20, 2022.

A Great Momentum of India’s IT sector