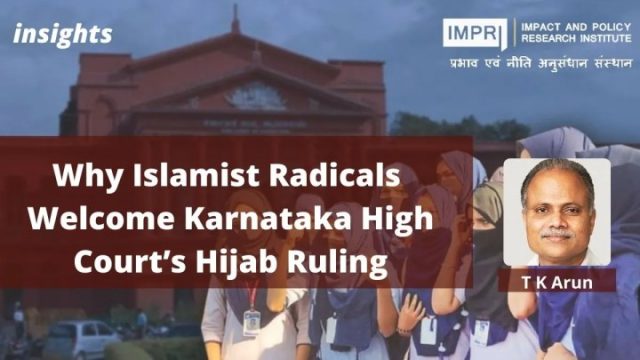 By finding unacceptable a practice that falls squarely within the universe of the constitutionally legitimate, the hijab verdict helps the cause of both radical Islamists and Hindu majoritarianism

The hijab verdict of the Karnataka High Court will set India back because it denies Muslims the opportunity to rid themselves of obscurantist and radicalised versions of Islam of their own accord, and forces on them a false choice between dignity as they understand it and abiding by the Constitution, as interpreted by judicial incompetence.

The hijab controversy comes at a time when organised attempts are underway, on the one hand, to degrade equal citizenship for Muslims, and, on the other, to radicalise Muslims and organise them into a political grouping that owes allegiance not to nations or cultures but to tenets of Islam as identified by proponents of the religion’s most sectarian version known to history. The verdict only helps to strengthen the propaganda that the Indian Constitution’s promise of dignified coexistence to minorities is false and that Muslims can find succour only in exclusivist Islam. It damages far more than Muslim girls’ education.

Liberals and democrats in India are quick to recognise and condemn the ongoing attempt to redefine Indian nationhood as Hindu, thereby partially disenfranchising all non-Hindus, in contravention of the vision of an inclusive, democratic nation upheld by those who fought for India’s freedom and worked that vision into the Constitution as operational principles. But they are less than forthright in identifying and calling out the attempted, organised effort to take Muslims out of the political and social mainstream and drive them into a pool of sullen alienation, in which many ideas breed that undermine democracy.

Several legal critiques of the Karnataka High Court’s hijab verdict are available in the public domain. Gautam Bhatia’s detailed critique (While Upholding Hijab Ban, Karnataka HC Misconstrued Several Constitutional Principles) and Faizan Mustafa’s succinct presentation (The problem with the hijab ruling) are excellent. These point out the problems with the essential religious practice test applied by the Supreme Court in the past and clumsily applied by the Karnataka High Court in the present case, to decide on whether a restriction on conduct violates the Constitution’s promise of freedom of religion and freedom of conscience.

It seems wholly illogical to even ask whether a practice under challenge is essential to a religion or not. Suppose someone comes up with a religion, for which human sacrifice is an essential practice. Will the right to freedom of religion protect that essential religious practice? Clearly not. This is where accordance with constitutional morality becomes a qualifying condition for an essential practice to qualify for the Constitution’s protection.

Why should the secular court get into what is an essential religious practice or not? That is for religious leaders and scholars to determine. India has a democratic Constitution that seeks to operationalise the values of liberty, equality, cohesion, justice and fairness. All that the court needs to examine is whether an impugned practice accords with these values or not, regardless of whether it has religious sanction or not.

Stoning to death for adultery might be an essential religious practise for some faiths. So what? It is incompatible with the values of the Constitution. It cannot have legal sanctions in India. A man’s right to marry four women might be sanctioned by Islam. It violates the principle of equality between the genders upheld by the Constitution. It should not have legal protection in India.

Wearing a turban by a Sikh is considered acceptable, apparently because it is an essential religious practice. The point really is not that. How does wearing a turban fall outside acceptable behaviour under the norms of the Indian Constitution? Suppose a non-Sikh wants to wear a turban, say, inspired by visions of Prime Minister Narendra Modi serially addressing the nation from the ramparts of the Red Fort, crowned by a succession of multihued turbans? Should that be frowned upon?

How does a Muslim girl wearing a headscarf in the classroom fall foul of constitutionally acceptable norms of public conduct? It clearly does not. Just as a girl wearing a nose stud or an earring does not. The problem that flummoxed the court is that when this conflicts with a prescribed uniform, how can the uniform not be privileged, without a uniform, how can either education or secular integration be promoted?

The court’s reasoning is illogical and confused. There are plenty of schools around the world where there are no uniforms but still manage to thoroughly achieve the goal of educating the young. The United States produces more Nobel laureates than any other country. The bulk of their young is educated in high schools that have no prescribed uniforms.

Further, the Karnataka high court verdict cites a ruling from Britain, selectively quoting a segment that suited the judges’ view while omitting its more significant part, as brought out by Gaurav Bhatia. The judges quote the UK House of Lord’s judgment in Regina v Governors of Denbigh High School, where, in paragraph 97 of her speech, Lady Hale notes that “a uniform dress code can play its role in smoothing over ethnic, religious, and social divisions.”

Unfortunately, however, the court omits, points out Bhatia, to cite what Lady Hale goes on to note in paragraph 98: “It seems to me that that was exactly what this school was trying to do when it devised the school uniform policy to suit the social conditions in that school, in that town, and at that time.

Its requirements are clearly set out by my noble and learned friend, Lord Scott of Foscote, in para 76 of his opinion. Social cohesion is promoted by the uniform elements of shirt, tie and jumper, and the requirement that all outer garments be in the school colour. But cultural and religious diversity is respected by allowing girls to wear either a skirt, trousers, or the shalwar kameez, and by allowing those who wished to do so to wear the hijab. This was indeed a thoughtful and proportionate response to reconciling the complexities of the situation.”

The organised heckling of hijab-wearing girls by mobs sporting saffron shawls, videos of which have been doing the rounds on social media, shows that the hijab row is not about uniforms but part of a communal campaign. This campaign comes at a time when Muslim students are subjected to another kind of campaign, to embrace an ultra-orthodox version of Islam informed by the norms of medieval Arab tribes rather than principles of their religion.

Should mainstream society, the state and its institutions offer support to Muslims to resist such campaigns, or should they make Muslims culturally and politically so vulnerable as to drive them into the sectarian fold of those who claim to be the only refuge of Muslims in India? If someone believes wearing a veil is a religious requirement, on the say-so of her elders or a cleric respected by her family, a policy of barring veiled girls from class would set up a false choice, between education and integrity of religious identity.

There can be different responses to such a false choice. Muslims could be persuaded by legal verdicts that wearing the veil is not an essential religious practice, regardless of what religious leaders say. If only court rulings could cleanse society of prejudice with such facile ease!

As the initial response to the court ruling has shown, the ruling only serves to reinforce the perception of institutional prejudice against Muslims. It delights the hearts of Islamic radicals who would now preach setting up separate schools for Muslim girls and the creation of an Islamic political community that transcends national boundaries.

Or the false choice can be dismantled by reversing the court verdict and proscribing policies on school uniforms that infringe or restrict legitimate choice within the realm of constitutional propriety.

Religious freedoms should not be defined by enumeration. It should be defined negatively, ruling out what is not acceptable, namely, whatever falls foul of constitutional morality. The rest should be available, without anyone having to ask anyone else’s permission to adopt any individual element from within the universe of the non-debarred.

Being obliged to wear a veil curtails women’s right to equality, even if far less perniciously than having to share a husband with other wives. It is rooted in patriarchy, not in religion. The point is to enable women to see this, rather than convert wearing the veil into a desperate measure of defence against an ongoing majoritarian assault on minority rights.