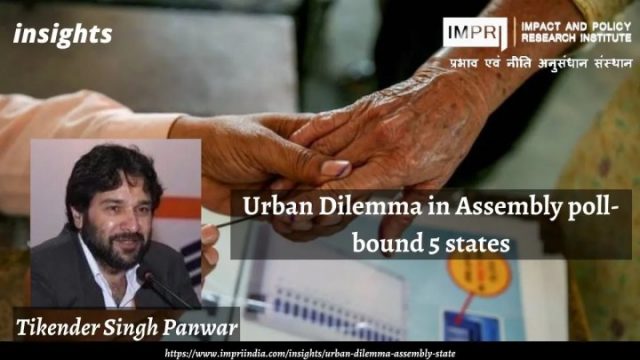 Political polarization has begun in the five poll-bound states – Uttar Pradesh, Uttarakhand, Punjab, Goa, and Manipur. Issues of caste and religious identity are again the focus, while those of livelihoods, pandemic management, price rise, and such have still not come to the fore.

All five states have substantial urban populations. Unfortunately, issues linked with urbanization remain neglected. It would not be amiss to mention that recently Prime Minister Narendra Modi invited a few mayors to Kashi to witness his vision of urban India. It is a brazenly iniquitous, exclusivist vision of urban design and governance.

Status of urbanization in five states

Of the five poll-bound states, UP, in numerical terms, has the highest number of urban voters, 4.5 crores according to the 2011 Census, 22.7 percent of its population, living in 3894 census towns. alone contributes 10.12 percent of UP’s gross domestic product, followed by Lucknow’s four percent. Urban and peri-urban areas send nearly a hundred legislators to UP’s 403-member legislature.

At 37.48 percent, Punjab has a high urban population percentage, higher than the national average of 34 percent, and has some of India’s largest industrial towns. Some model towns were also developed in Punjab, which finds reference in many Punjabi songs as places to have fun and frolic.

While more than one crore people live in 237 defined townships of urban Punjab, the peri-urban in the state is also primarily urban, and hence issues of urbanization are relevant. Towns contribute nearly 60 percent of the state’s GDP, and according to an estimate, there is an outlay of a meager 3 percent for urban areas.

Nearly six crore urban population living in these five states will exercise their voting right over two months. The number surpasses populations of many European countries which are predominantly urban. But urban issues are seldom exclusively seen from a political perspective.

Even if urban issues become essential, we cannot generalize these to be common to all urban areas. In some towns and cities, water may be a vital issue. It could be garbage management, mobility, or healthcare services in other urban areas. But there are still a few concerns and issues shared across the urban spectrum.

Foremost of all is the enormous impact on peoples’ livelihoods owing to “privatization of cities” since last few decades but with a rocket speed since 2014. These towns and cities, which were centers of employment and industry, have seen a sharp increase in people’s vulnerability, mainly economic, and this has happened across the states.

This privatization of cities is not confined only to some utilities and has accentuated poverty levels since it is taking place with the city planning process. It contributes to inaccessible housing, high costs of transport, utilities, water, electricity, health, education; the list is long.

The loss of livelihoods in urban centers is phenomenally high. The unemployment rate crossing double-digit figure in the past is the highest in the last four decades. The cost of living has skyrocketed in urban centers.

The social security net has loosened, which has compounded the distress. People, especially migrants who comprise a large population in the urban areas, find it difficult to make ends meet, evident in the aftermath of the lockdown announced in March 2020.

Inequity in India’s towns and cities has increased sharply. Since the last few years, the Oxfam report has repeatedly pointed out that urban inequity is phenomenally high in India. The gap between the rich and the poor has been widening.

One reason is how towns and cities are being developed as envisioned by the prime minister. The ‘smart cities’ further rob the people of the urban commons and transfer them to the super-rich in urban areas. Lastly, the common feature in urban towns is the low levels of urban governance. Charles Correa,
the chairperson of the first urban commission in India, once pointed out that cities in India are hardly run by the elected mayors but by the chief ministers of the state.

Moreover, the 74th constitution amendment provisions empowering city governments by transferring the three F’s – functions, functionaries, and finances – are yet to happen. Most cities are unable to manage the waste generated, be it solid or liquid, and unable to pay their employees’ salaries on time. Thus, city governance structures are weak and performances abysmal. In its recent report, the Reserve Bank of India pointed out that towns need more finances
and empowerment.

Despite these significant issues that concern people, one does not find them to be resonating in the political atmosphere in the five poll-bound states. One reason for the urban puzzle is that the political process leading to urban leadership is too meek to demand a space in the overall political
debate.

For example, the All-India Mayors Council (AIMC), a body of elected mayors from the country but completely defunct. The chairperson of the AIMC is the mayor of Agra. the political interest of the mayor is not to strengthen such bodies rather would be to become an MLA from his constituency. Agra city may be elect as many as five MLAs still the mayor would like to be one of them.

Here, allow me to share an anecdote KC Sivaramakrishnan, former secretary of the ministry of urban development, shared with this writer at a meeting of the national task force to review the 74th constitution amendment. He said, “Do you know what a mayor of Mumbai would like to become?” The mayor, he said, wants to become an MLA despite Mumbai electing more than 20 MLAs and five MPs.