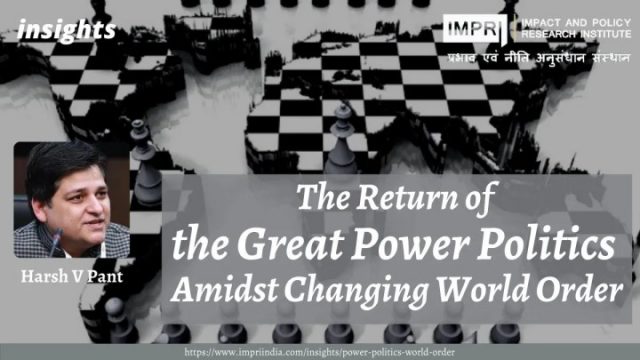 It has become a cliché to suggest that the Covid-19 pandemic has had a transformative impact on global politics. Indeed, for a health issue to be at the center of international political cross-currents is a rare development, though pandemics in the past have changed the global calculus to a considerable degree.

For all the debate on the changing nature of security for the last several decades, it took the onslaught of Covid-19 to make the world realize that the so-called non-traditional security issues are actually rather traditional. And as the world continues to grapple with a health crisis that has morphed into a wealth crisis, policymakers are having to re-evaluate their assumptions to a significant extent.
But international politics has a logic of its own too. With or without the pandemic, the tectonic plates of the post-1945 global order had begun to shift. In more ways than one, Covid-19 has merely accelerated the trends that were already visible before the devastation from Wuhan struck us last year.

Great power politics doesn’t really need a pandemic to reveal itself. China’s rise has shaken the global political order. Since the pandemic, it has revealed the multiple dimensions that have been impacted by the rise of power in the third decade of the 21st century that really wants to shake up the status quo. China under Xi Jinping is no longer hiding its strength and biding its time. Emperor Xi has decreed that China’s time has arrived and the world should pay heed.

Today’s China may or may not be like Hitler’s Germany but its behavior is reminiscent of the power competition in the European landscape before World War II. A rising power is challenging the underpinnings of a global order that most of the rest of the world had started taking for granted. The extant power, the US, has been found wanting in its response so far and, as a result, the stage is set for a period of great tumult.
This year made it clear that the US-China strategic competition is not merely the figment of Donald Trump’s imagination. His successor, Joe Biden, has sharpened the rhetoric and has expanded the range of issues across which this competition is likely to be played out. From human rights to technology, from supply chains to defense, this contestation is now building up, putting pressure not only on the other nations — friends and adversaries alike — but also on the extant institutional fabric of the global order.
Nowhere is this more palpable than in the Indo-Pacific where new powers are seeking entry while the established powers are trying to create new rules of engagement. This maritime geography is reverberating with ideas such as the Quad and the Aukus in the absence of any substantive pan-regional institutional architecture. Variable geometries pervade the region as coalitions of the willing emerge fast and furious.

While the US-China contestation is the meta trend shaping the region, it is the middle powers that are finally stepping up to the plate by shaping the normative and institutional space as well as by pushing back against the Chinese aggression. The recognition that the US may be too tied up with its own domestic dysfunctionalities is giving greater autonomy to the middle powers. How they will end up using it still remains an open question.
The sharpening of the fault line between democracies and the authoritarian models also gathered momentum this year. US President’s “Summit for Democracy” was not only aimed at generating a greater sense of solidarity among fellow democracies but was also a rallying cry for world leaders to work with him to bolster democratic institutions amidst the march of the authoritarian systems like China and Russia as well as a “backward slide” of democracy around the globe. As Washington’s focus shifts to the political challenge posed by China, it is asking the economic stakeholders too to fall in line.

In a recent intervention, the US Under Secretary for Economic Growth, Energy, and the Environment, Jose W Fernandez, exhorted the American business community to not see themselves as mere bystanders in the US-China strategic engagement but “be mindful how your activities can affect US National Security and the fundamental values we hold dear.” This is an important shift from viewing politics as subservient to economic interests to one where the primacy of political objectives is being reasserted.
Great power politics is once again shaping every dimension of the global order — climate change and sustainable development, infrastructure and connectivity, the trajectory of trade partnerships, technological developments for the fourth industrial revolution, and global health paradigms.

Indian foreign and security policies will have to contend with these shifts much like other nations. But if we can get it right this time and shed our ideological shibboleth, then this inflection point in global politics offers New Delhi an opportunity to emerge as a “leading power” in the true sense of the term.

First published in Business Standard Great power politics is back with a twist on 29 December 2021.

Read another piece by Harsh V Pant on Delhi-Dhaka relations titled Delhi-Dhaka: An Exemplar of Neighbourhood Diplomacy in IMPRI Insights