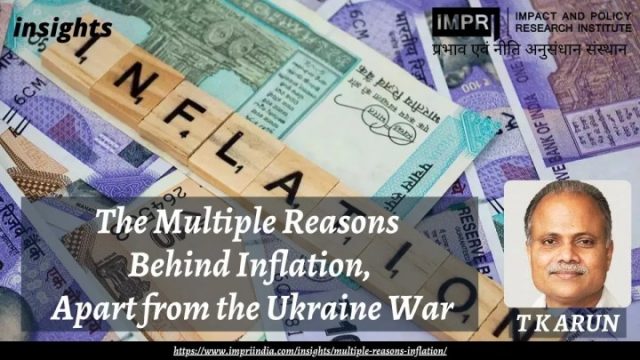 What has macroeconomic management got to do with old filmy villain Ajit’s penchant for drowning his enemies in liquid oxygen, so that the liquid would not let them live, even as the oxygen would not let them die? Both are about seemingly impossible tradeoffs.

A spectre is haunting India, the spectre of inflation. In fact, the spectre haunts most parts of the world. And persistent inflation is a clear sign of mismanaged tradeoffs.

A large part of today’s inflation has behind it that old enemy, the foreign hand. Oil prices had been going up even before Russia invaded Ukraine, as the producers’ cartel Opec squeezed supplies, even as recovery from the pandemic crystallised demand. The war made the price of crude spike. All other energy prices soared, too.

Oil prices found terra firma, even if on elevated slopes, once the initial shock dissipated. But other energy prices stayed airborne, thanks to the West’s choice to prioritise punishing Russia over concerns such as inflation, aborted global recovery, food shortages and poverty.

The West has sanctioned Russian produce, but has refrained from imposing secondary sanctions of the kind used against Iran – anyone who dares deal with Iran would also face sanctions. This is a concession to Europe, rather than to Russia. Europe has to import gas and oil from Russia, at least in the short run. That ruled out secondary sanctions, and left some Russian banks outside Russia’s expulsion from the Swift financial messaging system.

Oil boycotts are difficult to enforce. Oil has a ready market anywhere, its transport infrastructure is plentiful – oil tankers and berthing terminals. China, India and some others are importing Russian crude. But natural gas is not easy to either source or sell. Its transport infrastructure – pipelines, plants that liquefy the gas into LNG, special terminals for LNG tankers, more LNG tankers, regasification facilities at import terminals, pipelines to evacuate the gas from these – is limited and takes time and money to expand.

To the extent the West has cut back on gas and oil from Russia, its demand for gas and coal from other sources has shot up. This has lifted all energy prices, including of ethanol, for which corn is diverted, pushing up the prices of chicken feed and chicken. Even worse has been the West’s ban on imports of Russian grain, fertiliser and oilseeds. If you listened to BBC, you would think missing wheat from Ukraine is responsible for the squeeze on global wheat supplies. Ukraine is the fifth largest wheat exporter. Russia tops the league, exporting twice as much as Ukraine does.

Geopolitically created price increases in food and energy feed into India’s domestic economy as well. This has led to policy missteps.

RBI Gets It Right

The generous offer to export wheat to a hungry world and its sudden reversal is just the most visible one, on a par with the continuing ban on agri-commodity futures. Many others are more diffuse.

Should we take RBI to task for failing to manage inflation? RBI’s approach has been prudent and appropriate. Its decision to not make sharp and pre-emptive interest rate increases is spot on.

Price rises due to supply shocks must be allowed to feed through the system, to induce suitable demand adjustments: cutbacks, more efficient use and substitution. Higher rates must squeeze the second-round effects, when the demand for higher wages and resultant higher wages spread the initial price rises to all sectors.

When RBI runs down foreign exchange reserves to support the rupee, it moderates how much import prices push up domestic ones, and also spares dollar borrowers a crippling burden. But the more dollars RBI sells, the larger would be the money supply, which could aid inflation. So, RBI sells bonds to suck rupees out. The larger supply of bonds lowers their price and, thereby, raises their yield. Even without overt policy rate changes, RBI can nudge rates up.

Inflation-squeezing rate rises hurt growth, forcing another tradeoff. Growth helps the poor, creating new incomes, even as inflation crimps their consumption. The absence of excess demand in India, in spite of the central bank’s sustained easy money policy, points to policy failure, rather than success.

Large swathes of the informal economy were crushed by Covid, the incomes there disappearing to shrink demand. Free food has ensured the survival of people, but the absence of a mechanism to deliver support to small firms that never had access to bank finance has vapourised their earnings. The only remedy is large-scale investment and a policy environment that favours growth. Investment remains intentions. From selective protection and nurturing of economy segments to simmering social tension threatening schism, a range of factors thwart generalised revival. For this, blame neither the foreign hand nor liquid-oxygen type tradeoffs.

This article was first published in the Sanjaya Report as Plenty to blame for inflation, Apart from the Ukraine War

Read another article by TK Arun- Defections and Democracy in IMPRI insights.