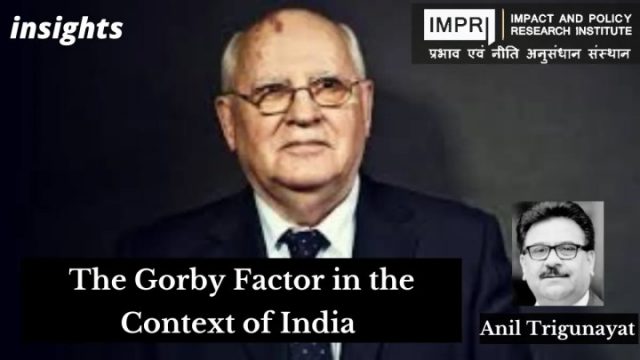 The disintegration of the Soviet Union was cataclysmic for the international order. The demise of the Soviet Union led to the supremacy of the remaining hyperpower, the United States of America. It also led to the end of the first Cold War. Nobel Laureate Mikhail Sergeyevich Gorbachev, who died on August 30, 2022, is credited with this unthinkable feat at the time. Although having been a reformist communist, he wanted the Socialist state to continue with some amount of Democratization which he tried to practice, but the sheer force of it broke and burst the dam of expectations.

USSR and Soviet Union disintegrated, starting with the Baltic Republics. Several East European countries preferred independence and chose to secure their future on their own terms. The Berlin wall fell. The Afghanistan fiasco had not only damaged the reputation of a powerful bloc but also engineered an economic crisis. His ‘Glasnost’ and ‘Perestroika’ policies became wishful thinking without any implementable ‘Road Map.’ Ordinary Russians suffered economically and felt humiliated politically as Reaganism prevailed.

Even though his penultimate successor, strong man Putin (after a disastrous Yeltsin), had invited the First President of Soviet Union Gorbachev to his own coronation Putin was categorical in his disdain for the actions of his predecessor that led to the Soviet disintegration. He also alludes current Russia-Ukraine to that very event. In 2005, Putin lamented the dissolution of the Soviet Union as the ‘greatest geopolitical catastrophe of the 20th century. Gorby factor continued to play on Putin’s mind as Gorbachev, until the very last, remained critical of Yeltsin and Putin’s policies, including the ongoing war with Ukraine. I recall meeting him in 2001 when he seemed utterly disappointed in how the Russian Federation was moving on.

He has been a controversial figure. While eulogized by the West and paid handsomely for his lectures and funding of his Foundation, many Russians could not align with his views and policies that were said to have been the cause of their miseries during the transition period of the 1980s and 1990s and to a great extent even now. They even thought of him as a western stooge. As an adherent of the same impressions, Putin politically encashed that frustration at grass root levels and embarked on salvaging the Russian pride. He recalled Gorbachev as a ‘Man who left an enormous impact on the course of world history.

He led the country during difficult and dramatic times amidst large-scale foreign policy and social and economic challenges. He deeply realized that reforms were necessary and tried to offer solutions to the acute problems. Reports indicate that Gorbachev, the first President of the Soviet Union, is not being given a state funeral.

From 1985 to 1991, the Gorbachev era at the helm of affairs was also quite politically turbulent. He had to deal with many domestic and international challenges. Gorbachev tried to improve relations with China. He worked in tandem with the US and the West, arguably in support of a modern democratic Soviet Union (Russia). His foreign policy preferences were more western oriented as he was trying to find a modus vivendi with them through Summitry and limiting nuclear weapons, especially after the Chernobyl disaster signing the Intermediate-Range Nuclear Forces Treaty with the US as well as the START I Treaty. Disarmament was given precedence.

Reagan eventually stopped considering the Soviet Union as an ‘evil empire.’ It appeared in hindsight to too many observers that the US deep state considered weaker leaders in Moscow as desirable and friends, but a strongman in Vladimir Putin, who, driven by Silovniki, could challenge the western supremacy, brought back the strategic rival matrix to the fore and the geopolitical competition goes on. Threats of a Cold War 2.0 are being engraved on the international wall of disorder.

India and the Soviet Union have had a substantive partnership and friendship, which acquired a greater heft in the wake of the 1971 Bangladesh Liberation War. Even though preoccupied with his western outreach, Gorbachev continued to nurture the relationship with India. He visited New Delhi twice, once in 1986 and the next in 1988, when India was also at the forefront of Disarmament. Rajiv Gandhi’s Six Nations Initiative fits well with Gorbachev’s nuclear disarmament drive.

Prime Minister Narendra Modi condoled the demise of President Gorbachev, stating that he was one of the leading statesmen of the 20th century who left an indelible mark on the course of history. He added ‘We recall and value his contribution to the strengthening of relations with India”.

During his visit in 1986, Gorbachev and Rajiv Gandhi signed several important agreements and, in a way, catapulted the significant bilateral relationship to a more comprehensive and higher diplomatic orbit were enlightened and intelligent self-interest became the guiding light. The Soviets offered the latest military weapons, including Soviet AWACs, with a carte blanche for other equipment, and India accepted it. Similarly, a road map and willingness to assist India in the scientific and technological domain were charted.

The Soviets opened all doors to their high-end research programs to India, including in the space and nuclear energy sector. The timing of the visit was also critical as India was somewhat miffed by the abundant military hardware offerings of the Americans to arch-rival Pakistan by Defense Secretary Caspar Weinberger after his sweet talks in New Delhi. Moreover, Gorbachev reiterated that the Soviet Union would not stand idly by in case of any threat to “India’s unity and integrity. We shall not take a single step in our foreign policy that could damage India’s real interests.”

His visit also won over public opinion in India at that time. A poll confirmed that over 93 percent considered Moscow India’s ‘best friend.’ However, New Delhi and Moscow differed in their approaches in at least two key areas. One was Gorbachev’s proposal for Asia Pacific Security Pact, which received a lukewarm response as ‘good’ from Rajiv Gandhi, and then on the Non-Proliferation Treaty, which India perceived as discriminatory, but Russia wanted India to be a part of it.

Although the momentum in bilateral relations remained vacillating due to the Gulf War, Soviet disintegration, and economic travails in both India and Russia -both tried to have a honeymoon in their own tracks with Washington DC, which, however, proved short-lived. The mantle of improving and sustaining the India-Russia relationship was yoked by President Putin, who brought in a paradigm shift by following an India-centric policy through the Special and Privileged Strategic Partnership, despite the China factor. India’s pragmatic, peace-oriented multilateralist and multi-alignment foreign and security policy, driven by her enlightened self-interest, continues apace despite the global geopolitical headwinds under PM Modi, where Russia remains a ‘Trusted Partner’ and the USA as a ‘Global Comprehensive Strategic Partner.’

This article was first published in India America Today as The Gorby Factor and India on September 3, 2022.