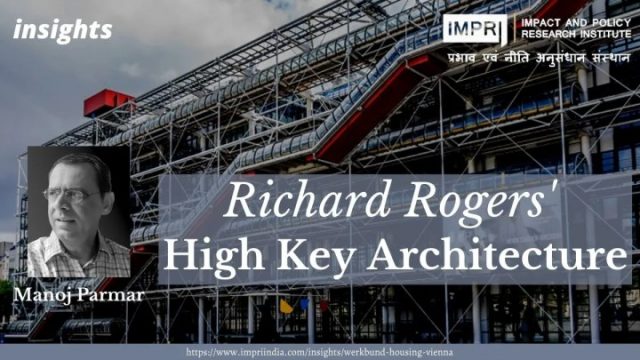 He demonstrated the work of Eladio Diestie in the second quadrant (low tech and high key) while the work of Richard Rogers, Norman Fosters, Renzo Piano, and Kenzo Tange’s work were categorized in the high tech and high key quadrant. This space is challenging because architecture not only unravels the newer means of production but also constantly replaces the technique (application) with technology (evolutionary and conceptual). The architecture of Richard Rogers along with his contemporaries challenged the technology of the time.

The four buildings that challenged the space left by the late modern are Lyod Tower, London | Pompidou Center, Paris | Hong Kong Shanghai Bank, Hong Kong (Norman Foster) | Olympic Stadium, Tokyo (Kenzo Tange). How is the work of these four architects relevant in the phase of high modernism? or what imperatives were compelling the architecture to represent time in an aesthetic that was not only unpredictable but challenged the preconceived notion.

Kenneth Frampton describes them as Productivist Architects, whose concerns are embedded into the Fordist philosophy (idiom of mass production) of production and organizing human environment conducive to productivity within delightful architecture. Indeed, the delight in the unpredictable and futuristic sense puts Rogers’  Architecture as resistant to the sterile modernist boxes or the scenographic representation of historic tokenism. He exalted from the earlier impact of the rationalist movement and took a plunge into the culture of architecture that is progressive and ahead of time.

The buildings with an open structural system, spikes, ducts, and studs as skin to the building are not merely a façade, rather they contribute to the making of space as a seamless entity for a productive working environment. The resultant architecture is not merely a product of function but embodies the space that is flexible and continues to transform as and when the need arises. The architecture of Richard Rogers is an advanced version of Miesian imagination. He celebrated architecture and filled the world of architecture with stunning and encapsulating timeless buildings.

First published in Between Architecture and Urbanism HIGH KEY ARCHITECTURE OF RICHARD ROGERS on 19 December 2021.

Read another piece on the Public realm and Urban transformation by Manoj Parmar titled Changing Nature Of Public Realm And Its Role In Urban Transformation in IMPRI insights.