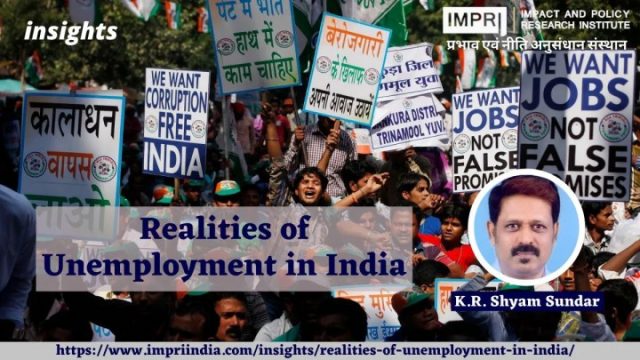 Does a satisfactory system of unemployment relief exist? Unlike in China, the labour laws do not expressly provide for unemployment benefits. However, under the Employees’ State Insurance Act (ESIA), 1948, the Rajiv Gandhi Shramik Kalyan Yojana (RGSKY) provides unemployment allowance to involuntarily unemployed insured persons who have made contributions for two years to ESI. The cash relief is at the rate of 50% of the last average daily wages for the first 12 months and 25% for the next 12 months. It covers unemployment due to retrenchment, closure or permanent invalidity. It provides medical care during unemployment tenure and vocational training.

In 2018, the government introduced the Atal Beemit Vyakti Kalyan Yojana (ABVKY) under which unemployed insured persons are provided allowance at the rate of 50% of the average per day earning of the claimant for 90 days on a pilot basis for two years. This was extended during the COVID-19 period.

Under the Industrial Disputes Act (IDA), 1947, industrial establishments employing 100 or more workers must pay retrenchment compensation of 15 days of average pay for the completed years of service to workers in case they lose jobs due to government-sanctioned workers’ retrenchment or closures of establishments. Here, the burden of unemployment allowance is transferred to the employer. Employment-intensive industries like construction and services are excluded.

Though the Social Security Code (SSC), 2020, included unemployment protection in its definition of ‘social security’, it did not provide for a scheme for the same. When quizzed by the Parliamentary Standing Committee on this omission, the government said: “Unemployment allowance is already provided for under the ESI Act. For the unorganized workers’ basic social security has been taken care of in the proposed code.” It is another matter that the ESIA, despite a more inclusive coverage of 10 or more workers than the Employees’ Provident Fund Act (20 or more workers), covers fewer workers thanks to its limited and slow expansion of districts in India.

On the other hand, many States amended Chapter VB of the IDA to apply it to establishments employing 300 or more workers and offer higher retrenchment compensation rates of 45-90 days of average pay for every completed year of service. The Central government has retained the existent paltry retrenchment compensation benefits in the Industrial Relations Code (IRC). So, it is a double whammy for the organised sector workers.

The incredibly low off-take means that RGSKY is not successful. How can the government argue that this scheme will take care of unemployment contingencies for insured workers, let alone for all workers and persons waiting to enter the workforce?

Under ABVKY, from July 1, 2018, to March 31, 2020, 120 claims were made, which means a meagre average daily cash relief of ₹73.33. During COVID-19, the government extended ABVKY from July 2020 to June 2021. Only 45,311 persons benefited from an average daily cash relief of ₹147.65. So, these schemes did not matter to the organised sector workers even during the pandemic. These facts strengthen the case against the government’s sole reliance on these schemes. If this is the plight of workers in the so-called organised sector, one shudders to imagine the deprivations of those rendered workless.

On the other hand, during the pandemic, Mahatma Gandhi National Rural Employment Guarantee Act (MGNREGA) played a significant role in providing if only modest relief to millions of workers. Economists have shown that relief to workers does not cost much as a proportion of GDP. It is much lower than the relief given to corporates. Yet, governments of all hues have been continuing with their neoliberal policies with abandon.

The SSC offers the vague promise of schemes to the unorganised workers. It has no concrete provision relating to unemployment allowance for workers of the organised sector. The hire and fire reforms in the IRC will accentuate unemployment, especially in urban areas. The SSC must be amended to provide for a universal unemployment allowance scheme with tripartite contributions to be determined by an actuary — the second National Commission on Labour in 2002 recommended an unemployment scheme for organised workers financed by employers, workers and the government.

Retail inflation has been hovering around 6% and the wholesale price index around 12%. The EPFO reduced its interest rate to 8.1% for 2021-22. Add to this the higher level of unemployment. Laws and welfare schemes must offer relief to marginalised workers who are reeling under multiple blows. An urban employment guarantee scheme should be framed to alleviate the sufferings of workers in the urban labour market.

First published in The Hindu, Whither unemployment benefits?, on March 22, 2022.

Watch K.R. Shyam Sundar at IMPRI #WebPolicyTalk sharing about his book at the book discussion Impact of COVID-19, Reforms and Poor Governance on Labour Rights.