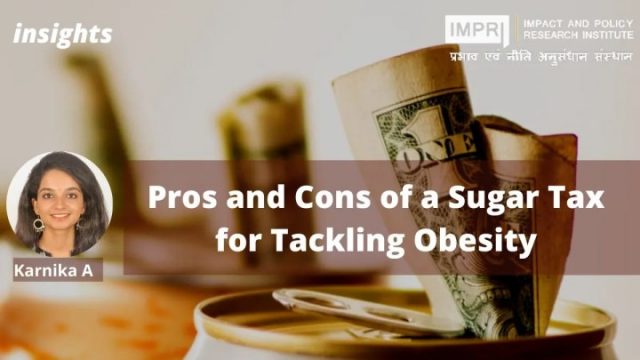 Obesity and why it’s the need of the hour

Obesity has become a common disease in the current period. According to the OECD reports, 1 in 4 people are diagnosed with this condition. A global study has pointed out that obesity has not only been found in developed countries but, surprisingly, even in the low- and middle-income countries with relatively high malnutrition rates. Studies now indicate that almost one-third of the world’s population is obese, out of which 62% is reportedly found in developing countries. Obesity can have severe implications on the health and productivity of an individual, leading to diabetes, high blood pressure, heart problems, high cholesterol. In the 21st century especially, childhood obesity has been considered a severe health issue that is yet to be resolved by health economists and policy experts. It has been found that children with a healthy weight and BMI could increase their school performance by nearly 13%. (OECD, 2019)

Unhealthy eating habits, lack of activity, environment, genetics, medications, stress and junk food advertising are some factors that can cause obesity. Side-lining the genetics and medical conditions as causes for this project, we can find that obesity among children and adults is usually caused due to an unhealthy environment and lack of physical activity, causing more calorie intake and less burnout.

For tackling this issue globally, it is done either by creating awareness through educational dissemination by providing information about the adverse effects of the problem through advertisements and teachings in educational institutions. Another way in which countries implement the policies is through subsidies and taxes. Several trials and studies have shown a positive correlation between a tax levy on sweetened beverages and drop in consumption levels. It is essentially levied on those sugar subsidiaries that do not add up any nutritional value for an individual, and the external costs that equate to the tax rates may also motivate consumers to better their eating habits. Such taxing is an example of Pigouvian taxes since its imposed-on items have a negative externality.

While implementing the latter, it is essential to evaluate the tax design, i.e. if it would be a unit-based tax or percentage-based, the quantity of the product or amount of sugar content and to whom it is being imposed, i.e. to manufacturers, retailers or consumer etc. (Shu Wen Ng, 2021)

International implications of the sugar tax

To reduce the consumption of sugary drinks and products, a sugar tax and a fat tax has been widely applied. Over 40 countries have implemented the sugar tax, mostly on sugar beverages and have had differing results. Study of the taxes in developed and developing countries can give us a brief overview of the implications of a sugar tax imposition.

Mexico had introduced the sugar tax on its sugar beverages in 2014, and it led to an increase in the price levels from 11-13% among soft drinks and beverages. Based on the statistics produced, it has been noticed that the tax has had a positive impact and has reduced the consumption and demand for sweetened drinks and beverages. The obesity levels in Mexico are also expected to fall significantly over the next ten years. The tax was also very cost-effective and reported saving almost 4% on the implementation. (Pedraza LS, 2019)

Denmark was one of the first countries to introduce a tax to curb obesity, but it was a fat tax on saturated food items. This tax, unfortunately, had a negative impact on the nation since it had increased cross-border trade, causing problems of unemployment and had to be repealed.

Certain jurisdictions in California, New York, Seattle, Illinois, Pennsylvania etc., exercise excise duty on sweetened beverages. Still, they haven’t imposed a national tax on the sweetened products yet, like the United Kingdom. They have named such taxes the ‘soda tax’, and usually, it is charged based on the quantity of the drinks and mostly, the proportion is 1 per cent per ounce. A reduction in sweetened beverages by nearly 23% was noticed a year after introducing the tax. Philadelphia is a prominent example of imposing a tax for revenue gains, where taxes are imposed on all sweetened beverages, inclusive of diet drinks and the revenue generated was used as a means for funding the education programs.

The levy of the sugar tax in the UK has been successful compared to other countries from the view of public health. According to a study, the sugar tax on the UK’s Soft Drinks Industry has reduced nearly 6500 calorie intakes from soft drinks per annum for an individual in the UK. (Scarborough P, 2019)

Pros and cons of a sugar tax

A sugar tax intends to send a strong message to people about the harmful effects of sugar intake, and its subsidiary products made using it. From the country-specific data observed above, we can find that the tax has significantly affected some countries. For some countries, it has fizzled out due to improper implementation, easy loopholes, absence of monitoring etc.

People have argued for a sugar levy because the social cost of a sugar tax is much more valuable than the private cost since a sugar tax puts a barrier to the consumption of sugary beverages and products and prevents several health problems which, if not taken into control can bring down the productivity of the society. Moreover, the treatment of obesity in itself costs a lot for a nation’s healthcare. Reports says that in Australia, treatment for obese patients itself costs $8.6 bn per year and even more. Hence the tax indirectly helps improve the efficiency and productivity in par with better health so as to contribute better to the economic and fiscal capital in the short term. Such policy interventions lead to a better cost-benefit returns than not implementing. (PWC, 2015) The revenue generated from the sugar tax can be used for several other health packages in the sector or be redirected for other social purposes like in the education sector to improve society’s welfare.

One of the arguments against a sugar tax is its regressive nature. Consumers from a lower-income background tend to pay a more significant portion of their revenue on taxes than the more affluent section of the population. The reason is that they tend to have access to foods that have more sugar and those that don’t necessarily have good nutritional content in them, especially those living in the suburbs, so they inherently end up bearing the brunt of it. An example of this could be the case of African countries with extreme poverty. Obesity rates are also increasing due to the increased consumption of junk food, especially by the lower-income group. A tax on these foodstuffs will probably be transferred from the poor to the government. (Norton Francis, 2016)

The level of unemployment and problems related to the producers and suppliers of the food industry makes them claim that such taxes are unfair and ineffective. Shops and brands that exclusively produce products involving sugar get affected to a large extent causing widespread unemployment. The tax rates on products can lead to competitive pricing on imported items from international suppliers; hence the government should consider measures in the taxing policy to minimize the impact on the final profit.

Constraining sugar would help control cases of obesity, being an ardent argument for the levy of a sugar tax does not have a firm footing since sugar is not the only factor that causes obesity or other health problems. Sure, people would switch to healthier options. Still, there are also cases when the laws are flawed if it is taxed only on sodas and beverages, making people opt for alternative sugar products to fix their cravings and make the levy baseless. (Krishnamoorthy, 2020)

Steps for curbing an unhealthy diet and including exercises in the daily routine in schools will be a starter for practising a healthy and active lifestyle among children. Strict government policies should be imposed on foods provided in schools and educational institutions to restrict or minimize the foods that have high sugar content in them. This needs to be extended to workspaces for adults as well since these are places where the two significant sections of the population that are inclined to get obese come under.

An alternative to a sugar tax can be a tax on junk foods which has the potential to be much more effective. Usually, fast foods that have high levels of salt, sugar, saturated, trans fat have significantly less nutritional value in general and these products are demanded greatly by working professionals because of their fast-paced life. Kerala was one of the states in India that had recorded the highest obesity levels in the country and were the first state to impose a ‘fat-tax’ in 2016 on food items sold by big fast-food chains. Gujarat had also taken Kerala as an example to set a similar tax structure in its system.  (Krishnamoorthy, 2020)

As necessary it is for the government to levy taxes, it is also equally crucial for the government to provide subsidies for healthy foods and vegetables so that people would attempt to make a switch in their consumption patterns, and it also makes it accessible for underprivileged to live a healthy lifestyle. Tax incentives and subsidies can also be extended to farmers as it encourages them to increase their yield and tend to their families’ nutrition as well.

While framing the policies, the policymakers must also make sure that it is not necessarily a money grab from the poor. Effective marketing, restricting advertisements of junk foods, food labelling etc. should also be under control since media is one of the main reasons for attracting and urging buyers to purchase products. Therefore, along with hardcore policies like taxing, paternalism through such soft measures also is required in the goal to curb obesity. (ScienceLine, 2017)

Instead of punishing the common people through taxes, the government must address the root cause and frame a policy to alter the current levels of accessibility and affordability of fruits and vegetables. The rich and the privileged have the means to change their lifestyle habits immediately, if need be, while the poor struggle to meet the bare minimum and consume anything to survive. Such inequality is the main reason behind obesity in underdeveloped countries, and amends for it should be made respectively.

Sugar tax is a very good policy for curbing obesity but that along with a consideration of the measures suggested above will make it a comprehensive policy.

Norton Francis, D. B. (2016). The Pros and Cons of Taxing Sweetened Beverages Based on Sugar Content.

Pedraza LS, P. B. (2019). The caloric and sugar content of beverages purchased at different store-types changed after the sugary drinks taxation in Mexico. PubMed.gov.

Scarborough P, A. V. (2019). Impact of the announcement and implementation of the UK Soft Drinks Industry Levy on sugar content, price, product size and number of available soft drinks in the UK. PubMed.gov.

Check out more Insights by the IMPRI team below:

Karnika A is a researcher at IMPRI Impact and Policy Research Institute. She is pursuing her MA Applied Economics from Christ University, Bengaluru.