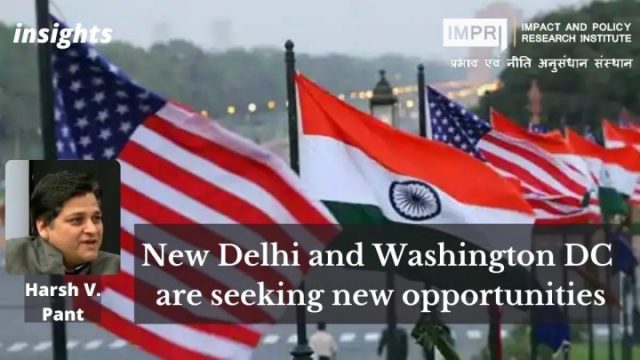 The defining image of this week’s IndiaUnited States (US) 2+2 dialogue is likely to be external affairs minister S Jaishankar’s response to a question on India importing oil from Russia: “Our [India’s] purchases for the month would be less than what Europe does in an afternoon.”

Many in India have viewed it as a rightful retort to America badgering New Delhi on the issue of its energy ties with Russia. And many in the US will view it as India continues to pursue its own line on Russia, despite the Ukraine crisis getting worse. But Jaishankar was merely stating the obvious and making it clear that New Delhi and Washington have different vantage points to view the unfolding crisis in Europe.

And yet the larger message from this week’s 2+2, which morphed into 3+3 with Prime Minister Narendra Modi and President Joe Biden setting the tone for the conversation, was that the world’s two major democracies are willing to work around their divergences to arrive at mutually acceptable outcomes.

Despite the headlines in recent weeks being dominated by their differences over the Russia-Ukraine crisis, India and the US have underscored their commitment to continue to build on the momentum of recent years and not lose sight of the larger strategic picture.

The defense partnership between India and the US continues to grow rapidly with the US secretary of defense Lloyd Austin underlining that the two nations have “identified new opportunities to extend the operational reach of our militaries and to coordinate more closely together across the expanse of the Indo-Pacific.”

Russia’s war on Ukraine and its global ramifications certainly could not have been avoided and they were a large part of the agenda, but the India-US bilateral partnership today encompasses a whole host of issues including the response to Covid-19, economic recovery post-pandemic, the climate crisis and sustainable development, critical and emerging technologies, supply chain resilience, education, the diaspora, and defense and security.

The breadth and depth of this engagement remain unmatched and the drivers of this partnership have been growing at an unprecedented rate. This relationship remains unique insofar as this is driven at both levels: At the strategic elite level and at the people-to-people level.

This week’s dialogue saw the signing of the memorandum of understanding on space situational awareness as the two nations seek to deepen cooperation in outer space and cyberspace to develop capabilities in both “warfighting domains.” The defense partnership between India and the US continues to grow rapidly with the US secretary of defense Lloyd Austin underlining that the two nations have “identified new opportunities to extend the operational reach of our militaries and to coordinate more closely together across the expanse of the Indo-Pacific.” He also pointedly mentioned that China was constructing “dual-use infrastructure” along the border with India and the US would “continue to stand alongside” India to defend its sovereign interest. This is not the language of two nations that are diverging in a strategic sense.

That India and the US will differ on the Ukraine crisis has been evident for quite some time. After all, Russia is not a new factor in this relationship. For years, the India-Russia defense relationship has posed challenges. The Countering America’s Adversaries Through Sanctions Act (CAATSA) law has been part of the discussion for a long time in the context of New Delhi’s purchase of the S-400 Triumf missile defense system from Moscow.

The US under-secretary of state for political affairs, Victoria Nuland, during her recent visit to India, acknowledged that “India’s dependence on Russia for defense supplies is crucial” and that this was a “legacy of security support from the Soviet Union and Russia at a time when the US was less generous with India.”

Though US secretary of state Anthony Blinken had “not yet made a determination regarding potential sanctions or potential waivers,” these seem to be a clear recognition in Washington that any move to sanction India would take the relationship back by decades. In its own way, the Ukraine crisis opened up new opportunities for the India-US partnership as well. The US under-secretary of state for political affairs, Victoria Nuland, during her recent visit to India, acknowledged that “India’s dependence on Russia for defense supplies is crucial” and that this was a “legacy of security support from the Soviet Union and Russia at a time when the US was less generous with India.” But with the new realities of today shaping the trajectory of this bilateral engagement, it is time for the US to help India in building its defense manufacturing base through technology transfer as well as co-production and co-development.

India’s position on the Ukraine crisis has been described by many as neutral or even non-aligned. But this is not our grandfather’s non-aligned posturing by India. India’s approach is underpinned by clear principles that it holds dear in the Indo-Pacific but is also applicable in the Ukraine crisis — respect for territorial integrity and sovereignty of States, the UN Charter, and international law. New Delhi is willing to use the present situation to explore opportunities to further its vital interests — be it asking the US to look afresh at its defense cooperation with India or buying discounted oil from Russia to serve its economic needs.

India is reluctant to condemn Russia publicly but with its abstention at the United Nations Human Rights Council (UNHRC), its repeated reference to the UN Charter, and its humanitarian help to Ukraine, it is making its priorities clear. They are about India emerging as a leading player in an international system that is undergoing an unprecedented transformation.

India and the US are strategic partners today in the true sense of the term. But a partnership among mature major powers is never about seeking a complete convergence. It is about managing differences by ensuring a continuous dialogue and channeling these differences into crafting new opportunities. The latest iteration of the 2+2 has managed to convey that sentiment effectively.

This article was published in the Hindustan times as 2+2 meet: Delhi and DC are seeking new opportunities on 14th April 2022