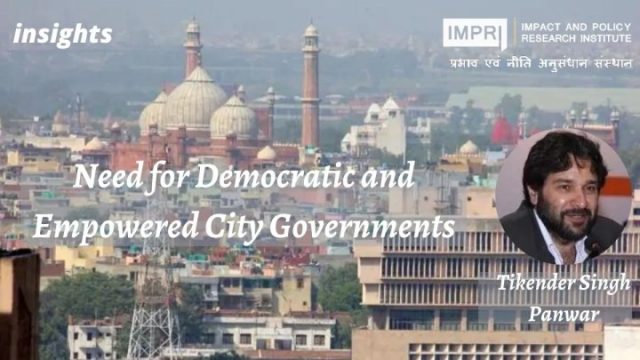 The general approach towards urban empowerment, including financial capabilities, has remained piecemeal in India

The Reserve Bank of India (RBI) in a report, “State Finances, Study of Budgets of 2021-22”, released in November 2021, wrote: “With the third-tier governments in India playing a frontline role in combating the pandemic by implementing containment strategies, healthcare, their finances have come under severe strain, forcing them to cut down expenditures and mobilize funding from various sources.”

The RBI further commented that the functional autonomy of civic bodies must increase and their governance structure strengthened. This could happen by ‘empowering them financially through higher resource availability.

It is interesting that the RBI did echo the recommendations of the 15th Finance Commission report on local bodies that emphasized city governance structures and financial empowerment. The addition in the RBI report is from the praxis and the objective reality from during the novel coronavirus pandemic — which continues even now.

However, there is only partial truth in the report. The emphasis is on resource availability, but how this will happen is not highlighted. At the most, it speaks only about generating more resources at the local level.

While correctly identifying the role of the city governments in meeting the challenges the pandemic has thrown up, the report also points to the draining of resources. An RBI survey of 221 municipal corporations (2020-21) revealed that more than 70% saw a decline in revenues; in contrast, their expenditure rose by almost 71.2%.

The RBI report also highlights the limited coverage of property tax and its failure in shoring up municipal corporation revenues. Organization for Economic Co-operation and Development (OECD) data show that India has the lowest property tax collection rate in the world — i.e., a property tax to GDP ratio. But this explains only one part of the story.

During the pandemic, while leaders from the Prime Minister to Chief Ministers to District Magistrate were seen taking a call on disaster mitigation strategies, city mayors were found missing. Why? Because under the disaster management plan of action, cities are at the forefront to fight the pandemic; however, the elected leadership finds no place in them. It is not just in disaster mitigation. The old approach of treating cities as adjuncts of State governments continues to dominate the policy paradigm.

The general approach towards urban empowerment has remained piecemeal in India. Urban development is a state subject, which is more linked to political and democratic movements in States. The first intervention to understand ‘the urban’ (though there are references in the Five Year plans) and plan with a pan-Indian vision took place in the 1980s when the National Commission On Urbanisation was formed with Charles Correa as its chairperson.

Another important intervention was in the first half of the 1990s with the Constitution 73rd and 74th Amendments. The latter refers to urban reforms — empowering urban local bodies to perform 18 functions listed in the 12th Schedule. But this was also the period of neoliberal reforms, so the generation of own resources and a slow withdrawal of the state could be witnessed.

Though the democratic transfer of 18 subjects was an important element, and necessary, there was, however, no mention of financial empowerment. It was linked more to the idea of “competitive cites” to attract investments in the urban centers by making their structures and land laws flexible. We now know that not much investment has happened, and cities have not really been able to enhance their financial capabilities.

The only exception to the rule has been the people’s plan model of Kerala where 40% of the State’s plan budget was for local bodies (directly) with a transfer of important subjects such as planning, etc. This paved the way for a new dimension to urban governance.

The RBI report has been right in highlighting that functional autonomy of city governments must be allowed. But this should happen with three F’s: the transfer of ‘functions, finances and functionaries’ to city governments. Without these, functional autonomy would be empty rhetoric. There are nearly 5,000 statutory towns and an equal number of census towns in India. Nearly 35% of the population lives in urban centers. And, nearly two-thirds of the country’s GDP stems from cities and almost 90% of government revenue flows from urban centers.

Before value-added tax and other centralized taxation systems, one of the major earnings of cities used to be from octroi. In fact, Pimpri-Chinchwad and Pune are examples of two very high revenue-earning municipalities dependent on octroi, as both cities have strong bases of industrial production.

But this source of revenue collection was taken away by the State and the central governments. Instead, finance commissions recommended grants to urban local bodies based on a formula of demographic profile. Previously, while almost 55% of the total revenue expenditure of urban centers was met by octroi (e.g., Shimla), now, the grant covers only 15% of expenditure. In such a situation, it is difficult for the towns to sustain their ability to perform their bare minimum functions, especially with the latest Pay Commission recommendations.

This has resulted in a vicious circle of burdening people more with taxes and further privatization/outsourcing of the services of the municipalities. This is a pan-India phenomenon and the grading of cities and urban policies are linked to this. Now with Goods and Services Tax, the ability to tax has been ‘completely robbed’; cities find themselves in a worse state than States.

The often-cited example is how cities in the Scandinavian countries manage their functions well — from city planning to mobility to waste management. But the truth is that a chunk of the income tax from citizens is given to city governments. Imagine cities such as large urban agglomerates in India getting a percentage of income tax for managing the affairs of urban places. It would be phenomenal!

A committee formed under the United Progressive Alliance (under the Ministry of Housing and Urban Development to review the 74th constitutional amendment), recommended that 10% of income tax collected from the cities was to be given back to them as a direct revenue grant from the central government. Alas, it was never taken into consideration.

What needs to be done? Cities must be treated as important centers of governance, where democratic decentralization can bring amazing results (as seen in Kerala). There will be transparency and adequate participation of the people.

Second, cities should not be considered as entrepreneurship spaces where the sole driving force is to make them competitive to attract investments. We have seen how fallacious this argument is. They must be considered as spaces for planned development by giving adequate attention to resources.

Our cities are hardly prepared for the impact of climate change; nor do they have adaptive strategies. The resources required for quantitative and qualitative data must be immediately provided to the cities to ensure a disaster risk reduction plan keeping vulnerable communities in mind.

Fourth, a piecemeal approach such as the concept of ‘smart cities’ must be shunned altogether. This approach further widens the gap between different sets of people. Rather, the grants from the Centre must be enhanced and cities asked to draw up their plans themselves based on priority seeking from city residents. Cities are people, as they say, and people must be a part of the decision-making process.

Fifth, leadership in the cities must be elected for a term of five years. In some cities, the term of the mayor is for a year! Likewise, the third F, i.e., functionaries, must be transferred to the cities with a permanent cadre.

Thus, in this exercise by the RBI, the good part is that there has least been a mention of cities, with local bodies as important centers of governance.