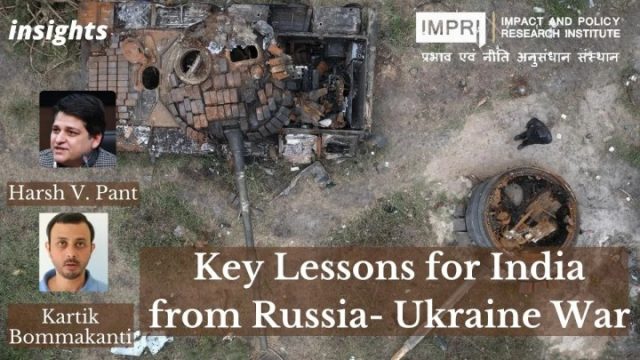 Russia’s invasion of Ukraine has had many impacts, but one area which merits more attention is whether it has produced effects sufficient to alter our understanding of warfare. A perusal of the evidence suggests that there is not any significant change in the nature of warfare. However, there are some key takeaways which have implications for the Indian military, which uses a significant amount of Russian-origin weapons systems.

There are at least three claims made by proponents that the conflict has heralded a shift in warfare. The first is that the battle tank has been rendered obsolescent, because of the highly effective performance of anti-tank missiles such as the American-built Javelin or Advanced Anti-Tank Weapon System in visiting destruction upon Russian T-90s. But tanks have withstood past obituaries.

Immediately after World War I, which witnessed the emergence of the battle tank, there were voices, especially in Britain, pronouncing the death of the tank, because it could not punch through German defences. This conclusion proved misleading because the Germans saw considerable merit in the tank and employed it to devastating effect in the form of the Blitzkrieg in World War II.

Fundamentally, at a tactical level, for the tank to be effective requires the use of infantry in close support of armoured operations. As was the case in past wars in which the tank suffered losses, this is still absent in Russia’s strategy, which explains why the Russians have suffered such heavy tank losses. As a standalone capability, the tank provides advantages in the form of a trinity of elements – firepower, mobility and protection. No weapons platform for ground operations can serve as a credible substitute.

If precision firepower is to be delivered against adversary targets, legacy systems will matter for launch of ordinance. Emerging technologies can enable better Command, Control, Communication, Computers, Intelligence, Surveillance and Reconnaissance, help optimise situational awareness, reduce decision time for commanders from detecting threats to responding to them, and augment sensor to shooter capabilities.

The devastating losses incurred by the Russian ground forces from drone and anti-tank attacks operating in Battalion Tactical Groups, comprising largely armour and artillery units and little infantry, seem to have convinced proponents that there is a change in the nature of warfare. Infantry plays a key role in providing protection to any advancing tank column and retaliating when threatened. This doesn’t herald a change in warfare, it is just poor tactics.

As a standalone capability, the tank provides advantages in the form of a trinity of elements – firepower, mobility and protection. No weapons platform for ground operations can serve as a credible substitute.

Finally, the failure of the Russians to effectively apply air power botched the invasion from the outset. This has convinced proponents that air power is not consequential. Indeed, Suppression of Enemy Air Defences should be the foremost requirement for any invading force. Russia’s failure to neutralise Ukrainian air defences remains a glaring weakness. Active Ukrainian air defences have compelled the Russians to revise their military aims and confine their military operations to Donbas and the Black Sea coast.

Russia’s invasion left long lines of communications and military columns that could not be supplied and reinforced. This left them exposed to lethal interdiction by Ukrainian forces. A corollary to this is the low morale among Russian soldiers consisting of a large number of conscripts and poor command. Military effectiveness is critically a function of troop morale and command competence. These two vital variables have very little to do with technology or logistics.

The key takeaway for India from Russia’s unimpressive military performance is to invest more in sensors, electronic warfare, greater digitisation, satellite communications and unmanned systems not just for reconnaissance and surveillance, but also attack missions. This does not require dispensing with legacy platforms, but rather making them more lethal and effective. India will also need greater missile forces to enhance its offensive capability. The Indian armed forces will need to be proficient at combined arms warfare. No amount of advanced technology can substitute or compensate for low morale and training, weak command, poor tactics and strategy.

This article was originally published in The Hindu as Lessons from Russia for India on 25 May 2022.

Kartik Bommakanti is a Fellow with the Strategic Studies Programme, ORF