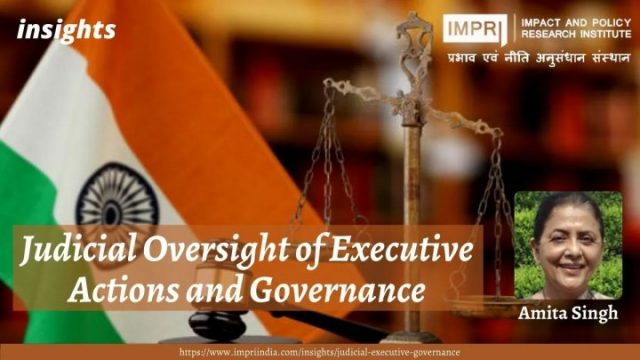 One can find enormous literature on the subject of judicial independence and governance but a recent speech of the Chief Justice of India NV Ramana at Vijayawada can be ranked as one of the most strident and comprehensive descriptions of the relationship between the law and governance that sustains constitutional democracy. The most eye-catching is an open admission that the cause of an overburdened judiciary with back-breaking pendency of cases lies within the legislature itself.

The CJI highlighted that all three organs of government ie; legislature, executive, and judiciary despite the separation of powers need to function in coordination and mutual checks and balance, a principle enshrined in the Constitution. He brought the problem inside out by highlighting bad drafting of laws in the legislature to compromised roles of public prosecutors and a lack of accountability as a cause for executive slippages and decisions blatantly deviating from law.

Yet the most important concern that I wish to focus upon and re-examine is the judicial oversight of executive actions which ensures and protects some basic norms of governance and citizen’s rights against wrongful administrative decisions.

One understands judicial oversight as a process by which the judiciary examines the legality of any executive action according to the provisions of the Constitution or law of a country. Through judicial oversight, the functions of bureaucracy are scrutinized and tested based on evidence for its validity or legitimacy.

It is through a process of judicial review or by fixing a tortious liability of the state that good governance can germinate on stable grounds of democracy. The CJI expressed concern on being criticized for ‘judicial overreach’ as judicial review is a sine qua non of democracy notwithstanding a popular majority with the parliament which at no point can become a defense for arbitrary actions taken by the government.

One reaches the judiciary only after exhausting means of justice available at every government department open for the purpose. It remains of utmost importance that this organ of governance is least influenced by power or by money while at the same time it is allowed to perform its most indispensable task of judicial review.

The Indian Constitution does not follow a rigid separation of powers principle and has a workable system of mutual checks and balance to maintain equilibrium amongst the three organs of the state for achieving better governance. Since Justice Mukherji’s judgment in the 1955 case of Ram Jawaya v. State of Punjab the principle of separation of powers had been only of partial recognition till the issue got settled in the famous Keshvanand Bharti Case of 1973 when it was recognized as a basic feature of the Constitution and later was endorsed in the leading case of Indira Gandhi v.Raj Narain in 1975.

In an ideal condition, if all three organs function within their sphere of authority there would be no conflict but because there are overlapping domains of action and chances of executive overstepping its assigned boundaries is more, the judicial review comes in handy to protect the rights and freedom of people. Indian Constitution is one of the most beautifully carved and sensitively designed documents in the world that prohibits arbitrary action of the executive even in the worst of times but that which fails the Constitution is a popular majority in the Parliament trying to stretch itself higher than the Constitution. The history of independent India shows that recourse to use one’s popular majority to bypass laws have remained mere will-o’-the-wisp.

Normally, the judiciary does not interfere in administrative decisions unless there is a serious case of contravening the Constitution or the law for being malafide or arbitrary. There have been instances as grave as custodial deaths, child sexual abuse, and serial killing where the Court has only interfered when approached by the aggrieved party.

This general rule of locus standi of the approaching aggrieved party was relaxed during the tenure of Justice Bhagwati who, in 1982, justified it on grounds of the said litigation being intended not for the benefit of one individual but for the benefit of a class or group of persons who are either victims of oppression or have been denied their constitutional rights but cannot come to the court because of their ignorance, poverty, and destitution. This opened up a barrage of litigation from grassroots upwards leading to campaigns for the right to food, education, information, and affirmative action at the community levels.

While this became a weapon to expose corruption, abuse of the law by authorities, faulty projects, and many other policy slippages concealed behind opaque governance it created turbulence and a death knell for certain flagrant practices of the executives to fill their pockets. One cannot ignore that the politician-administrative-contractor nexus in implementing developmental projects in Gadhchiroli, Bastar, and some places in the northeastern states is directly linked to the rise of anti-state and Naxalite movements amongst the poor and marginalized inhabiting the terrain. Inundated with pro-poor PIL (Public Interest Litigation) measures the courts which were largely occupied by judges coming from elite and upper strata of society started looking at this legal tool with suspicion.

Finally, the judiciary’s disbelief that the country’s grassroots was so rotten overlooked the indispensability of PIL as a citizen’s weapon when it started deriding it in a 2003 case of Ashok K.Pandey v. State of West Bengal as a ‘publicity interest litigation’ or ‘Private Interest Litigation’, ‘politics interest litigation’ or ‘paisa interest litigation’. It became easy for government counsels to prove that the allegations on administration were reckless and led with the purpose of public mischief. Since there were limits to a third person’s fight for an altruistic cause without support the PIL system weakened. The spirit of CJI’s lecture indicates that despite these criticisms, these measures do stand out to defend democracy and the Constitution.

If the spirit of CJI is so upbeat for protecting democracy and constitutional governance from malafide actions of the executive, Courts ought to go beyond the constitutional remedies available with the Apex Court under Art 32 and High Courts under Art 226. One would refer here to the need to fix ‘tortious liability of the State’ or of holding the state vicariously liable for the wrongs committed by administration. An absolute immunity of government has never been recognized in the Indian legal system. Many brave judges have imposed liabilities upon the government and tortious acts of its administrators and this list is pretty long. However, the list is shrinking in the last few years due to an emerging impudence against the Constitution and law which is becoming chivalry and a badge of valor for many administrators.

The most common administrative violation is where building bylaws are blatantly subordinated to a nexus with contractors leading to the deaths of innocent citizens. The district administration repeatedly allows unauthorized structures or grabbing of fragile wetlands. In 2015 a tragic incident at Mahendergarh, Haryana leading to the death of 11 construction workers in the wall collapse exposed negligence on the part of the district administration and the Haryana labor department. It violated the Building and Other Construction Workers’ (BOCW -Regulation of Employment and Conditions of Service) Act, 1996, as they did not get most of the laborers registered before the commencement of the work. The district administration allowed construction of the stone-crusher without a no-objection certificate.

A bigger case of negligence was the Maradu Apartments at Kochi backwaters which got completion certificates from seven government departments without survey reports from any of them. In both cases the Courts questioned illegalities and in the latter, its stringent action brought down the completed skyscrapers too but administrators party to the crime remained unpunished. The provisions for tortious liability of the state exists under Art 300(1) and has been clarified further in Nagendra Rao v. State of A.P. 1994 as, ‘suit against public officials for compensation for negligence or malfeasance is maintainable and defense of acting in the capacity of sovereign function in limited.’

Lately, police officers have been carelessly filing charges against activists under Section 124 A(sedition), 153A (promoting enmity between different groups on grounds of religion, etc), and 295A (deliberate and malicious acts, intended to outrage religious feelings of any class by insulting its religion or religious beliefs) of the Indian Penal Code (IPC), along with provisions of the Unlawful Activities (Prevention) Act (UAPA) and the Information Technology Act. Many cases such as that of Siddique Kappan and Munawwar Farooque were dragged for many months despite the urgency attached to habeas corpus petitions in courts. On the contrary, the Uttarakhand police registered an FIR but never arrested any of them who gave an open call to genocide against minorities in a three-day ‘Dharam Sansad’ held in Haridwar.

In some of the key cases involving top political brass of the country, courts have remained powerless as in the case of the administration of UP which continued to name and shame 57 anti-CAA protestors in 100 hoardings across the city in complete violation of the Allahabad High Court orders for their immediate removal since it was an ‘unwarranted interference into the privacy of people. Much remains to be explored in the manner in which the administration handled the Lakhimpur incident involving a Minister’s son running over and killing many farmers of the protest march. The Minister has yet to resign or accept his accountability and liability for the deaths.

As per law, an unlawful administrative act is no act in law. Yet, illegal activity continues to be in operation and continues to harm people in losses to life and property which goes uncalculated in courts. This dangerous position is summed up by the famous dictum from Lord Radcliffe’s speech in Smith v East Elloe Rural District Council [1956], which should be noted by the CJI, “An order, even if not made in good faith, is still an act capable of legal consequences. It bears no brand of invalidity on its forehead. Unless the necessary proceedings are taken at law to establish the cause of invalidity and to get it quashed or otherwise upset, it will remain as effective or its ostensible purpose as the most impeccable of orders.”

Since the 1990s, the judiciary has been awarding compensation to victims of wrongs committed by public authorities and in some recent judgments of the Apex Court, there is a clear tendency to fix personal accountability and penalty on administrators whose wrongful decisions to delay and abort the processes of law has gravely violated the constitutional rights of citizens. However, our country needs urgent judicial reforms to plug the gaps and loopholes of governance which are rooted in the manner law is treated at the table of the country’s decision-makers, bereft of ethics and personal accountability it becomes a beaten ping-pong.

First published in The Daily Guardian Some thoughts on the judicial oversight of executive actions on 30 December 2021.