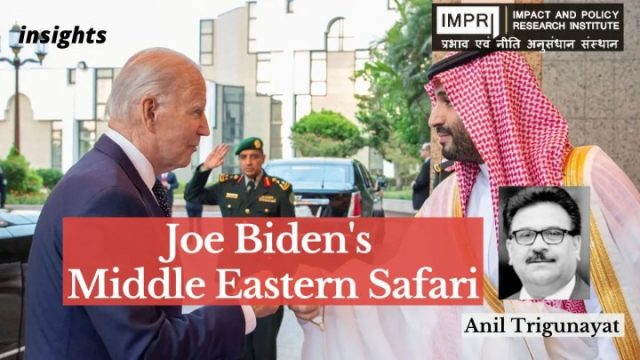 An old adage in diplomacy is that there are no permanent friends or enemies only permanent interests. One could qualify it to include even temporary interests due to prevailing geopolitical or geo economical constraints and headwinds. US President Joe Biden’s tour to Israel and Palestine (Jerusalem and Bethlehem) and on to Saudi Arabia fits quite well into the aforementioned matrix.

Although Democratic Party candidate Biden had vowed to make Saudi Arabia a ‘Pariah’ claiming himself to be the champion of human rights and not to deal with the de facto reality in the personae of Crown Prince and the most powerful Saudi leader Mohammed bin Salman (MBS) who has been accused of the killing of his American critic Jamal Khashoggi.

But, the Russia-Ukraine crisis and Afghan fiasco changed the matrix as the major West Asian nations began to exercise their strategic autonomy and quest for new partners through their ‘Look East’ policy—having been disenchanted and doubtful of the capacity and intent of their erstwhile security guarantor the USA in so far as the regional landscape and American choices were concerned. Even though they are well aware that the kind of security guarantees they seek can not be replaced by another power at least in the near term.

President Biden during this visit (July 13-16) will seek to reassure his Arab and Israeli partners that Washington will not be abdicating its responsibility to effectively provide them security when needed and perhaps will justify the arms and weapons sale to its largest buyers in Saudi Arabia and the UAE which have been short shrift by the Houthis penetrating into their airspace despite Patriots and what not. It has been reported that USA and UAE are discussing a comprehensive defense partnership which could then be extended to others, especially to Saudi Arabia.

In addition, Israeli Defense Minister Benny Gantz claimed that an air defense agreement (Middle East Air Defence) could be finalised. Israeli security has been a critical concern for the US establishment and it is being increasingly realised with the Abraham Accords that Arab–Israeli cooperation has to be the pivot.

For this, however, the Palestinian issue needs suave handling. Hence, after a disastrous Trump setback, the Palestinians are somewhat hopeful about the interaction of Palestinian leadership with visiting US President Biden in the occupied West Bank. They have their own recent menu of existential woes let alone century-old problems. They would definitely want the US to do something about the status of Jerusalem (that Trump changed overnight) and reopened the US Consulate for Palestine in Jerusalem as well as resumption of the genuine Middle East peace process while removing several entities from the sanctioned list.

All of these may not fly as Israeli PM Yair Lapid remains a caretaker Prime Minister. In any case, the significant startup of the MEPP does not seem to be a favorite topic for the Arabs or the Israelis. More aid and promises may come. The US itself is drowned in the consequences of the Russia–Ukraine War. In any case, the Jerusalem Declaration will have some initiatives, especially in the domain of regional security and options. Arabs especially Riyadh and Abu Dhabi will seek some predictability in US policies.

In recent weeks, Prince Salman (MBS) has visited regional countries for the US-Gulf ++ Summit which will be attended in Jeddah by the GCC leaders as well as those from Egypt, Jordan and Iraq. Biden surely will attempt a closer partnership between Riyadh and Tel Aviv for which some concessions to Palestinians might be needed. Apart from bilateral discussions between President Biden and King Salman plus Crown Prince Salman as well as during the regional Summit, Iran will be the Peacock in the room.

Washington is still keen to rejoin the JCPOA (Iran nuclear deal) especially due to the energy crisis caused by the Russia-Ukraine war and under European pressure despite some extraneous and some justified demands by Tehran. Hence, while preparing the security structures and certain commitments (subject to congressional approvals) Biden is unlikely to go all the way into the West Asian complex yet again given the domestic and international challenges to its foreign policy. Any regional security architecture will warn the Iranians and their benefactors even more.

More supply of oil and gas in the market is a key priority for the safe exit of Europe through the winters. While the Russia-Ukraine war does not appear to be ending soon. Likewise, most of the world especially the Middle East and Africa are facing an acute food crisis that will have to be addressed. The easy solution is the ending of the war. But to justify his visit and about the turn of the administration’s approach President Biden Biden wrote an Op-ed in Washington Post (to which Khashoggi belonged) as not aimed at rupturing the relationship but to rebuild while working to ‘Counter Russian aggression and outcompete China’.

Even National Security Adviser Jake Sullivan reiterated that the Biden visit was to reinforce a vital American role in the region to counter Iranian influence and aggression by Russia and China. But Fred Ryan owner of the same paper said that increase in oil production by the OPEC countries has become a priority for which on human rights Biden might look the other way.

While the Biden visit is taking place, the Chinese President has decided to pay a visit to Moscow this or next month to carry forward their ‘No Limits relationship’ as Putin himself meets his Turkish and Iranian counterparts in Tehran next week. Efforts to defuse the crisis and to fan it simultaneously have become a new normal in the impending Cold War 2.0 where rival blocks in the Middle East will also be a reality unless the intra-regional trust deficit is bridged.

Amidst these strategic posturing, one softer virtual Summit — I2U2 with USA, UAE, India and Israel may have a good start with the leadership commitments at the highest level. India has strategic partnerships with the other three and being the fastest growing large economy and market and being a part of G7++++, QUAD and BRICS, and the next chair of G20 has become a new and reliable economic conduit and landscape despite her strategic autonomy.

This article was first published in CNBC TV 18 as Intent and implications of Joe Biden’s desert safari on 16 July 2022.