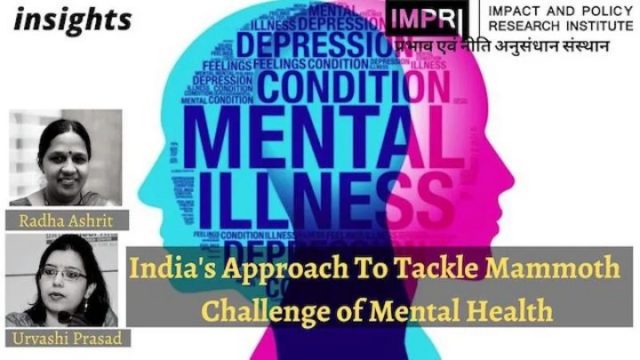 A multi sectoral, integrated and data driven approach for tackling mental health challenges is of the essence as there are several vulnerable population with special needs including children, adolescents, women, economically and socially deprived older persons, people with disabilities and victims of trafficking.

According to the Global Burden of Disease Study (1990-2017) one in seven Indians was affected by a mental health problem of varying severity in 2017. The burden of mental health disorders in India is around 2443 disability- adjusted life years per 100,000 population a summary measure of health loss, as per the World Health Organisation ( WHO) while the age-adjusted suicide rate is 21.1 per 100,000 population. WHO estimates economic loss to the tune of USD 1.03 trillion for the country between 2012 and 2030 on account of mental health disorders.

The challenge has been further exacerbated by the COVID-19 pandemic, with the WHO highlighting that mental health services have been disrupted or halted in around 93% of countries globally. The pandemic has contributed to numerous mental health stressors in the form of lockdowns, self-quarantine, fear of infection as well as job and financial loss.

The WHO further estimates that every dollar invested in mental health yields four dollars as a return on investment. The Government of India has implemented several measures for strengthening the design and implementation of mental health services in the country. The Mental Health Policy, 2014 elucidates a participatory and right- based approach to mental health service delivery. Additionally, the Mental Health Act, of 2017 provides a legal framework for protecting and promoting the rights of people with mental illness. At the primary care level, services are delivered through the National Mental Health Program and the Health and Wellness Centres. Treatment for mental health illness is also covered under the flagship insurance scheme of the government, the Pradhan Mantri Jan Arogya Yojana.

A multi-sectoral, integrated and data-driven approach for tackling mental health challenges is of the essences there are several vulnerable populations with special needs including children, adolescents, women, economically and socially deprived older persons, people with disabilities and victims of human trafficking.

For instance, it has been observed that the prevalence of anxiety and depressive conditions are higher in females compared to males due to a variety of factors including but not limited to violence, sexual abuse, postnatal stress and adverse social-cultural norms. Females are prone to developing eating disorders on account of biological factors, media as well as pressure. Autism-related and attention deficit hyperactivity disorder have, on the other hand, been more commonly reported among males, due to hormonal and genetic factors. Similarly age-related differentials also exist in the prevalence of mental disorders. Older adults have a higher prevalence of depression, for example. This has been attributed to factors like difficulty coping with chronic diseases and inadequate social support.

Factors with contribute to the development of mental health issues are multi-faceted ranging from poverty and homelessness to financial distress and disasters. The involvement of different sector both within and outside the government encompassing health, education, housing, women and child development as well as social welfare, among others, is therefore critical.

There is considerable variation between states concerning the burden and trends of mental health disorders over time. For instance, the Global Burden of Disease Study estimates that the crude DALY rate of depressive disorder varied 2.1 times between States in 2017. The corresponding variation was 1.4 times for anxiety disorders, 1.6 times for schizophrenia and 1.3 times for bipolar disorder. Generally southern India had a higher prevalence of mental disorder among adults compared to northern India. Conversely, the prevalence of childhood and adolescent mental health issues was higher among the north Indian States in comparison with the south. It is crucial that policy making and the health system response are informed by these differences.

In addition to data, emphasis on research is also crucial. Implementation research, which paves the way for the design of context-specific interventions for various target groups, has an important role to play in mental health response effort.

Another crucial aspect is the sensitisation of front-line health workers, Anganwadi workers and teachers to mental health challenges as this enables them to identify at-risk individuals at an early stage and provide timely support, Children and adolescents require special attention considering that around half of all mental health disorder start by the age of fourteen years.

While the focus is on increasing the number and quality of specialists like psychiatrists is vital, a public health approach that focuses on mental health promotion through integration of Ayurveda and Yoga is equally critical.

Finally, it is imperative to tackle the social stigma associated with mental illness which acts like a barrier to the timely diagnoses and treatment of various conditions. Due to stigma, many individuals are apprehensive about sharing their mental health challenges and seeking help. Alleviating stigma requires the engagement of government, opinion makers, mass media as well as community and faith leaders.

The article was first published in The Economic Times as A whole of society approach to tackling India’s mental health challenges on October 10, 2022

Read another piece by Urvashi Prasad- India’s Fertility Rate Falls, But the Story is Different for Some States in IMPRI insights

Read another piece by – Health Digitalization: Transforming the Health System in IMPRI insights

Read another piece by – Citizen’s Statement: We Reject ‘Your’ Muslim Women’s Rights Day in IMPRI insights