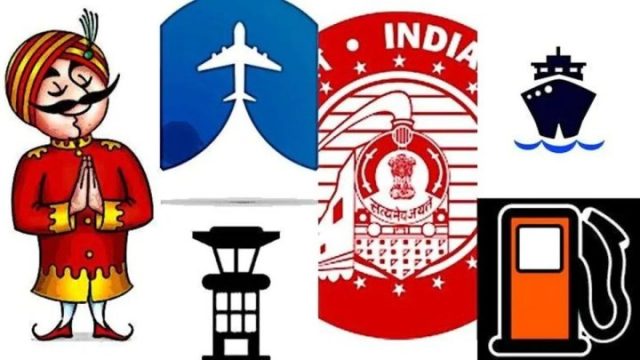 After Independence, the public sector was considered the engine of growth in India’s growth story. As decades passed, the Public Sector Undertakings (PSUs) began facing infrastructural bottlenecks and other shortcomings. The utilization of resources became inefficient, and many public sector units started accumulating losses. Consequently, in 1996, the Disinvestment Commission, chaired by G V Ramakrishna, was set up to monitor, supervise and publicize disinvestments of Indian PSUs. From May 2004, the Department of Disinvestment came under the Ministry of Finance.

Disinvestment refers to the sale or liquidation of assets, i.e, converting an asset into cash or cash equivalents by selling them in the open market and distributing them to claimants. It generally includes central and state public sector enterprises, projects, or other fixed assets. The main objectives of disinvestment in India are to reduce the fiscal burden and improve the efficiency of the enterprise, increase revenue sources, bring in private players, promote competition, and develop a strong capital market.

However, disinvestment isn’t privatization. Both differ in terms of percentage shareholding and management control. When a government sells a whole enterprise or a majority stake to private investors, giving them complete ownership and control, it is known as privatization. The government usually avoids doing this by retaining 50% or more of the stake in the public sector enterprise so that the control remains in its hands, which then becomes disinvestment.

Disinvestments by the Government of India

The Department of Investment and Public Asset Management (DIPAM) under the Ministry of Finance handles all matters related to the management of Central Government investments in equity. The four major areas of its work are related to Strategic Disinvestment, Minority Stake Sales, Asset Monetisation, and Capital Restructuring. The disinvestment process of Central Public Sector Enterprises (CPSEs) is based on consultations and decisions of ministries and professionals because of the technical and complex nature of transactions.

Looking at some political trends in disinvestment, the data from DIPAM suggest that till 8 November 2018, total disinvestment done by NDA-led governments was almost twice (58%) than that done by the UPA-led governments since 1991. There have been shortcomings and disinvestment targets have not been met successfully in the past. Some of the reasons for such low proceeds have been unattractive offers for private investors, opposing views in the valuation process, lack of will, and unfavorable market conditions.

The following table gives a brief outline of Annual CPSE Disinvestment Target vs. Achievement in India since 1991-92.

In terms of achievements so far in 2021-22, total DIPAM Receipts account for Rs. 2,699.468 million, Disinvestment Receipts account for Rs. 932.99 million, and Dividend Receipts worth Rs. 1,766.478 million. Looking at some triumphs, the landmark deal of disinvestment of Air India brought the spotlight on the Modi government’s aggressive reforms agenda and helped in instilling confidence amongst domestic and foreign investors, and boosting the country’s business and economic prospects.

According to the CMIE report dated 5 November 2021, Finance secretary, T V Somanathan pointed that Covid-19 derailed the plan in the first two quarters of 2021-22, making it difficult and unlikely for the government to meet the disinvestment target for this session. The unorganized sector has been hit the worst due to the COVID-19 pandemic, with loss of employment and wealth. Such volatility adds to high levels of uncertainty. However, if strong liquidity persists and core economic sectors keep doing well, the government might find itself in a position to achieve a higher percentage of its divestment target.

Building investors’ confidence and offering the right value proposition is the key to making them participate in bidding processes and make disinvestments a success. Additionally, the government should also dig into alternative revenue sources instead of merely depending on disinvestment. As the economy recovers from the dwindling effects of the pandemic, positive sentiments will bring the economy to a positive growth path.

Swati Solanki is Research Assistant and Assistant Editor at IMPRI. She is currently pursuing her Master’s degree in Economics from Delhi School of Economics, University of Delhi.