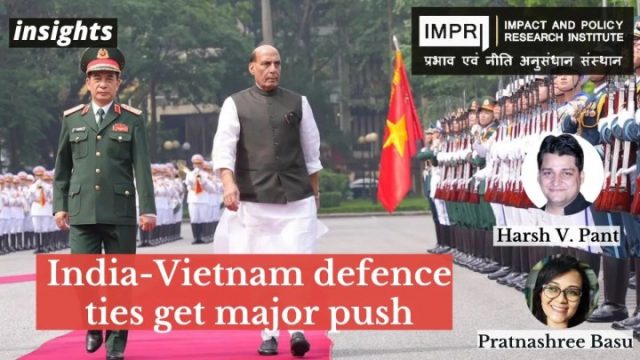 The furtherance of India’s Act East Policy, maritime multilateralism, maritime security outreach and the building of stronger networks across the Indo-Pacific are some of the key elements which have made New Delhi and Hanoi natural partners. The two countries recently deepened bilateral cooperation with the signing of the Joint Vision Statement on India-Vietnam Defence Partnership towards 2030 during the recent visit of Defence Minister Rajnath Singh to Vietnam.

The Joint Vision Statement is aimed at boosting the scope and scale of the existing defence cooperation between the two nations. Both sides undertook extensive deliberations to expand avenues of effective and practicable collaboration in bilateral defence engagements pertaining to regional and global issues.

In the meeting with his counterpart, Vietnam’s Minister of National Defence General Phan Van Giang, the early finalisation of the $500 million Defence Line of Credit extended by India to the latter along with the implementation of existing projects which would complement India’s ‘Make in India, Make for the world’ and Hanoi’s defence capabilities were also discussed. The two sides also signed a Memorandum of Understanding (MoU) on mutual logistics support.

This is the first agreement of its kind that Hanoi has entered into with any other country and elevates the standing of Comprehensive Strategic Partnership (CSP) which Hanoi shares with New Delhi since 2016 (along with only Russia and China). Earlier this year in January, on the 50th anniversary of the establishment of diplomatic ties, India reaffirmed its commitment to the CSP.

Because of the volume of maritime trade that passes through sea lanes of communication in the Indo-Pacific and potential as well as estimated energy reserves in these waters, maritime cooperation between countries in the region have expanded exponentially. Undoubtedly, for India and Vietnam too, the maritime domain in particular has occupied a central focus.

Both countries find convergence in their approaches towards the maintenance of stability and security of the Indo-Pacific which has translated into diplomatic and political support in the context of developments within the region and manifested in the form of tangible and functional cooperation instruments — the most vital being bilateral defence partnership.

The enhanced geostrategic prominence and attendant uncertainties vis-à-vis China’s expanding and often abrasive footprints in the Indo-Pacific have resulted in an overall increase in emphasis on cooperative mechanisms and frameworks across the region. Hanoi and New Delhi have not been strangers to these developments and have stepped up bilateral exchanges.

Defence partnership between the two countries has been growing steadily following the signing of the Defence Protocol in 2000 and today covers extensive navy-to-navy cooperation spanning the exchange of intelligence, production and logistical support for Vietnam’s defence requirements, development of naval facilities such as Nha Trang, defence dialogues, high-level visits and the supply of warships and cruise missiles.

Vietnam has and continues to be one of the most vocal countries with respect to China’s periodic transgressions in the South China Sea. In India, Vietnam has found an equally uncompromising partner when it comes to the question of violations of freedom of navigation and threats to sovereign maritime territorial rights as enshrined under international maritime law.

Indeed, it is believed that Hanoi used the term Indo-Pacific for the first time in 2018 in its joint statement with India. New Delhi has supported Vietnam’s position in the South China Sea with respect to Beijing’s destabilising actions and coercive tactics backing the verdict of the Permanent Court of Arbitration in the case brought by Manila in 2016 and reiterating the irrefutability of the UNCLOS. India has also not backed down from continuing ONGC Videsh Ltd (OVL)’s oil exploration project in Block 128 (which is within Hanoi’s EEZ) despite China’s protests.

In 2020 China’s incursion into Ladakh was quickly followed by the deployment of warships by India to the South China Sea in an instance of asymmetrical warfare and a signalling that India will not stand down. These instances together with the deepening of India’s operational outreach in the Indo-Pacific have successfully indicated and cemented its role as a capable, willing and reliable partner.

It is also in the last few years that Vietnam has augmented its emphasis on naval diplomacy and strengthened its ties with the US alongside the extension of its engagement with India and other ASEAN members. Many ‘firsts’ have occurred in this period including the visit of Japanese submarine Kuroshio in 2018 which docked at the Cam Ranh International Port; the visit of Canadian naval ships to the Cam Ranh military base in 2019; the signing of the Framework Participation Agreement between Hanoi and the EU which facilitates the former’s participation in the EU’s Common Security and Defence Policy (CSDP) missions and operations with Vietnam being the first among ASEAN member countries to do so.

Despite the fact that the China factor has provided impetus to the solidification of ties, it is also important to consider that mutual cooperation is not driven solely by it. Both countries have expanded areas of collaboration and are supportive of each other’s individual and multilateral involvements within the rubric of the Indo-Pacific. Convergences between New Delhi and Hanoi has thus naturally found expression in bilateral relations and the two countries are poised to develop their partnership further in the coming years.

This article was first published in The Hindu as How Hanoi and New Delhi are fortifying defence ties on 27 June 2022.