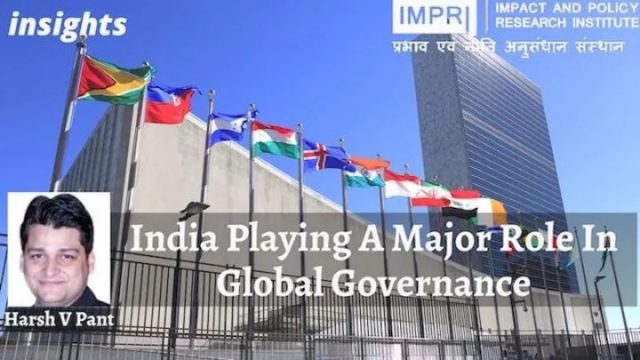 At a time of unprecedented global flux, new structures of global governance will emerge and India is at the heart of most of these. This is a transformative moment in global politics, and in Indian foreign policy aspirations.

Last week, external affairs minister S Jaishankar forcefully put India’s outlook on the global stage at the 77th session of the United Nations General Assembly (UNGA). Though it was aptly titled A Watershed Moment: Transformative Solutions to Interlocking Challenges, it was clear that transformative solutions are nowhere in the offing.

If anything, the structural realities of contemporary global politics have made any serious reform of the multilateral order an even more difficult task. The fault lines between various powers are sharpening and the voices of the poorest, most vulnerable nations are increasingly lost in the din of this great power contestation. New Delhi’s response, therefore, stands out as a testament to its commitment to the global South as well as a recognition of India’s arrival as a power with considerable goodwill across the globe.

Jaishankar spoke for a large part of the world when he reminded UNGA of the urgency for reforms not only because “of the widespread recognition that the current architecture is anachronistic and ineffective” but also because it is “perceived as deeply unfair, denying entire continents and regions a voice in a forum that deliberates their future.” Though this has been a regular feature of Indian interventions at UNGA, there is a new anxiety about emerging global challenges and the inability of the extant UN system to respond adequately to them. At this juncture, India is effectively acting as a bridge on some serious but divisive issues confronting the UN Security Council (UNSC).

This is not only because of India’s growing capabilities and its rising aspirations to play a larger role but also because of how the world today perceives New Delhi’s ability to bridge this divide. Indian diplomacy won praise from different quarters at UNGA, at times from nations that are poles apart. Ukraine and Russia, France and the United States (US), all either referred to Indian diplomatic efforts or pushed India’s candidacy for UNSC. Mexican foreign minister Marcelo Luis Ebrard Casaubon proposed setting up a committee with Narendra Modi, Pope Francis and UN secretary-general Antonio Guterres to mediate between Russia and Ukraine.

The world today wants India to do more and India is reciprocating that faith. Jaishankar made four salient points in his speech that underscore India’s changing foreign policy priorities. First, he made it clear that today’s India is not seeking external validation in the conduct of its diplomacy. The India of today, reflected in its confident and resurgent society, is willing to take on greater responsibilities because it believes “that national good and global good can be entirely in harmony.” From green growth and better connectivity to digital delivery and accessible health, India is a provider of global public goods far beyond its immediate periphery.

Second, this rise of a new proactive diplomatic posture has happened at a time when some of the most powerful nations in the world have moved away from their responsibilities. There are global inequities in the system that disproportionately impact the global South even as they are not responsible for most of these problems. The pandemic, the economic distress and the Ukraine crisis are cases where the powerful have played a key role in dismantling the extant structures of governance.

Third, India made its stand on the Ukraine conflict clear, once again, in the above context by reiterating the need to uphold the UN charter and international law. New Delhi looks at this crisis through the prism of the developing nations that are “struggling to make ends meet, even as they stare at the escalating costs of food, of fuel and fertilisers.” This is important to take the debate away from the binary of the West and Russia to the wider world that is reeling under the strain of a needless conflict. By projecting itself as a voice of reason, India could once again reiterate that “this is not an era of war or of conflict” but “a time for development and cooperation.”

Finally, Jaishankar showcased India’s multilateral record at the UN by highlighting its term as a member of the Security Council this year where it focused on issues such as maritime security, peacekeeping and counterterrorism. Drawing a contrast between India’s “cooperative, inclusive, and consultative approach to international relations” with “those who politicise the UNSC 1267 Sanctions regime, sometimes even to the extent of defending proclaimed terrorists,” the call for reformed multilateralism involved not only New Delhi taking on greater responsibilities but also ensuring “that the injustice faced by the global South is decisively addressed.”

What was left unsaid in Jaishankar’s formal statement was the fact that with or without UNSC reforms, India’s role in global governance is only becoming decisive. The meetings of the Quad, Brazil, Russia, India, China, South Africa (BRICS), India, Brazil, South Africa (IBSA), India-Caricom (Caribbean Community) and other trilateral formats, such as India-France-Australia, India-France-United Arab Emirates and India-Indonesia-Australia are a sign that the world will not wait forever for the UN system to reform itself. At a time of unprecedented global flux, new structures of global governance will emerge and India is at the heart of most of these.

As a responsible global stakeholder, New Delhi remains willing and able to work with the UN system. But the global multilateral framework should respond to India’s aspirations as well. This is a transformative moment in global politics, and in Indian foreign policy aspirations. This was the essence of Jaishankar’s global engagement last week.

The article was also published in The Hindustan Times as India is at the heart of global governance shifts on September 29, 2022.

Read another piece by Harsh V Pant- In The 21st Century, India Springing As A Geopolitical And Geo-Economic Player in IMPRI insights

Read another piece by Harsh V Pant- Liz Truss Triumph: Win for the Party and the UK in IMPRI insights