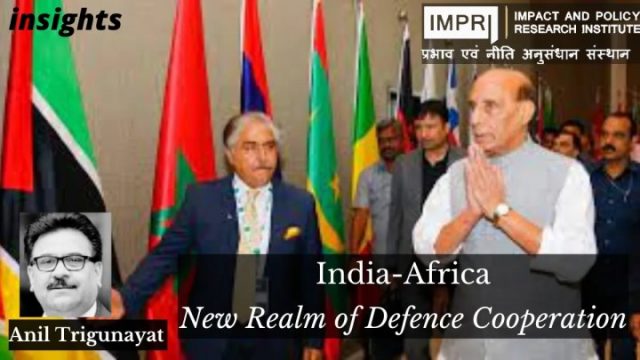 India was probably the first country that not only supported the decolonization of Africa and Asia but established defense training institutes in several countries while providing them with requisite logistical and instructional material and assistance. Moreover, India has always stood for Africa with her ‘Share and Care’ approach and has been collaborating in bilateral, regional, and sub-regional formats while becoming its voice at the UN, WTO, and WHO.

I fondly recall a conversation with former President of Nigeria General Olusegun Obasanjo, who had been trained in India, when he proudly claimed that ‘I know India better than you’. I had no hesitation to accept in full humility as he indeed was very passionate about greater collaboration with India.

He was instrumental in bringing back democracy in this most populated country in Africa. Several other leaders including the current President of Nigeria Gen Muhammadu Buhari, who was at the Defence Services Staff College in Wellington, have acknowledged and contributed immensely to nurturing closer ties with India.

Even now a large number of them continue to train at NDC and other institutions from counter-terrorism to overall military dynamic and evolving strategies to meet global and imminent developments as we mull over the security challenges from piracy to maritime domain to dealing with domestic and external challenges in their countries. A bond of trust gets triggered during these interactions. One of the key deficits in the bilateral context was the absence of high-level visits between India and Africa from New Delhi.

Fortunately, during the present Government that has been adequately addressed and 18 new diplomatic missions have been opened to cover 90 percent of Africa. Only recently Defence Minister Rajnath Singh visited Cairo while the MOS EA V Muraleedharan and Secretary of Economic Relations among others have been engaging their counterparts in various parts of the Continent which is seeking to unite at least economically.

India has always stood for Africa with her ‘Share and Care’ approach and has been collaborating in bilateral, regional, and sub-regional formats while becoming its voice at the UN, WTO, and WHO be the lack of African at voice at the UN and other international fora, issue of provision of Covid vaccines or waiver of IPRs at the WHO or market access, trade, and climate-related issues at WTO and COP26.

India was probably the first country that not only supported the decolonisation of Africa and Asia but established defense training institutes in several countries while providing them with requisite logistical and instructional material and assistance. At the request of the then President of Ethiopia Haile Selassie India set up the first-ever defence academy in Ethiopia in 1956 which trained a large number of African military officers since 1958 and the collaboration continues.

Likewise in 1964, India helped establish the Nigerian Defence Academy at Kaduna and the bust of Brigadier MR Verma there reminds one of that exceptional feat and collaboration. Naval College at Port Harcourt besides other elite military training establishments in Nigeria has been established with senior-level officer exchanges becoming frequent and focused.

Bilateral Institutional mechanisms like the Joint Defence Cooperation Committees and MoUs /Agreements for defence collaboration have been put in place with key countries Several other African countries have benefited from this capacity-building assistance and the list keeps getting extended as pursuant to the clarity on Africa Policy was enunciated by PM Narendra Modi while addressing the Ugandan Parliament when Security of Africa was also underscored and India’s assistance was assured with an ‘Africa for Africans ‘ motto in practice.

Participation in UN Peacekeeping operations and the role of Indian soldiers has been remarkable since the 1960 Congo days. Even the Indian all-female police force in Liberia only a few years ago became a major success story and has been awarded for their diligence, dedication, and duty in the cause of peace and order. Over a decade ago during my discussions with President Sirleaf of Liberia, the topic remained the excellence and professionalism of Indian peacekeepers in UNMIL. They became role models for their hosts.

Now as the African Union is taking a greater interest in managing conflicts and coups by itself, which is indeed desirable, India could do well to extend all possible assistance in that effort since the ‘Silencing of the Guns’ initiative ‘ is being challenged by the repeated undemocratic overturning of the governments more so in the past couple of years. Defense sector cooperation and Dialogue between the African continent and India have been institutionalized and activated during the last few years.

Despite the pandemic, India hosted African Defence Ministers at Lucknow in 2020 when First India -Africa Defence Ministers Conclave & Dialogue (IADD) was held and institutionalized on the sidelines of the Def Expo. A ‘Lucknow Declaration’ underscoring the importance and extent of cooperation for further enriching defense ties was issued.

The next IADD is scheduled for October 18 at Gandhinagar after being postponed in March this year due to the pandemic. Dozens of African Defence Ministers and several delegations are expected to attend. The dialogue will help build on existing partnerships between India and African countries while exploring new areas of convergence and mutual engagements.

The broad theme of this India-Africa Defence Dialogue is ‘India – Africa: Adopting Strategy for Synergizing and Strengthening Defence and Security Cooperation. A Press Release by Defence Minister underlined that India and Africa share close and historical ties. India’s approach towards Africa is guided by the Kampala Principles enunciated by Prime Minister Shri Narendra Modi in 2018. India’s engagement rests on African priorities as outlined by Africans themselves.

The IADD will explore new areas of convergence for mutual engagement, including in areas like capacity building, training, cyber security, maritime security, and counter-terrorism, it added. India has also been extensively engaged with African countries through its SAGAR strategy as well as “Vasudhaiv Kutumbakam’ and considers Africa as an extended family.

Several joint exercises including MILAN, VARUNA, and IBSAMAR have been conducted especially as India is a resident power in the Indian Ocean and Africa is an integral part of India’s Indo-Pacific vision. Indian naval ships continue to make goodwill visits at the friendly ports of call in Africa as they Indian naval ships were deployed to assist the security of the maritime commercial routes while countering piracy and terrorism.

Of course at the Def EXPO, the African delegations will have a first-hand experience of “Made in India” equipment, weapon systems both lethal and nonlethal, and accessories that are efficient, proven, and driven by 3A -Affordable, Available, and Adaptable. India has been open to joint manufacturing and training so as to enhance and build the capacity and capability of African countries who are the well-wishers of India and do respect and acknowledge and sustain the umbilical connect.

To several countries, India has been providing patrol boats through Lines of Credit or as a gift for securing their maritime boundaries including Mauritius, Seychelles, and the Velvet islands. With Comrade Xi Jinping being crowned for the 3rd time with his clear and articulated agenda of the quest for superiority, it would be prudent to expect that they will refocus on Africa and other BRI partners from a strategic contestation and ‘zero sum’ matrix.

Hence, it is imperative that India’s overall relationship with the African continent, which has become far more sanguine and self-reliant to cast its destiny, is expeditiously taken into a higher result-oriented orbit. The 4th India Africa Forum Summit which has been long overdue with some innovative ideas could l provide India and Africa yet another canvas of meaningful dialogue and mutually beneficial and sustainable collaboration as one witnesses the ‘Rush” of superpowers towards the hitherto exploited and neglected Continent. India has been an exception to this rule of the gold rush.

This article was first published in CNBC TV18 as India and Africa – Scouting for new frontiers of defence cooperation on October 18, 2022.

Russia-Ukraine: A Frozen Conflict or a Full-fledged war

The 21st SCO Summit: A Repeat of the Past?