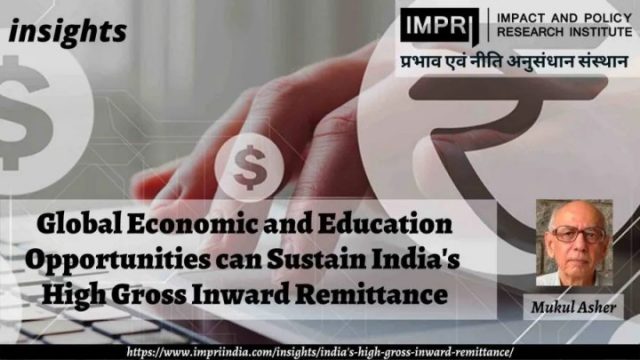 This column argues that for India to continue to sustain the position it has occupied for some years as the largest recipient of gross inward remittance flows, it would be necessary to aim Indian diplomacy toward expanding greater global economic and education space for Indians.

Table 1 provides the gross inward remittance of selected countries, including India, in 2021. The data suggest the following-

Source: Estimated from The World Bank ,2022. A War in a Pandemic, Migration and Development Brief 361.

Inward Remittance Estimates for India to Reach a Landmark in 2022

In a November 2022 Report, the World Bank has projected India’s inward remittances to reach USD 100 billion in 2022, the first country to ever reach this landmark. This represents an increase of 12 percent over 2021. Remittances to low- and middle-income countries (LMICs) are projected to increase by an estimated 5 percent in 2022, to USD 626 billion. Thus, India’s share of LMIC remittances in 2022 would be about one-sixth.

The Report argues that there are several longer- and short-term trends that were obscured by the pandemic that has resulted in reaching this landmark.

First, there has been a gradual structural shift in Indian migrants’ key destinations from largely low-skilled, informal employment in the Gulf Cooperation Council (GCC) countries to a dominant share of high-skilled jobs in high-income countries such as the United States, the United Kingdom, and East Asia (Singapore, Japan, Australia, New Zealand).

According to the Fifth round of the Survey on Remittances for 2021 by the Reserve Bank of India, between 2016–17 and 2020–21, the share of remittances from the United States, United Kingdom, and Singapore increased from 26 percent to over 36 percent, while the share from the 5 GCC countries (Saudi Arabia, United Arab Emirates, Kuwait, Oman, and Qatar) dropped from 54 to 28 percent.

With a share of 23 percent of total remittances, the United States surpassed the United Arab Emirates as the top source country in 2020–21. About 20 percent of India’s emigrants are in the United States and the United Kingdom. According to the US Census, of the approximately five million Indians in the United States in 2019, about 57 percent had lived in the nation for more than 10 years. During this time, many earned graduate degrees that groomed them to move rapidly into the highest-income-earner category.

Higher education mapped onto high-income levels with direct implications for remittance flows. In 2019, the median household income for Indians in the United States was nearly USD 120,000 compared to about USD 70,000 for all Americans. The structural shift in qualifications and destinations has accelerated growth in remittances tied to high-salaried jobs, especially in services. During the pandemic, Indian migrants in high-income countries worked from home and benefitted from large fiscal stimulus packages. Post-pandemic, wage hikes and record-high employment conditions supported remittance growth in the face of high inflation.

Second, the economic conditions in the GCC (30 percent share of India’s remittances) also played out in India’s favour. The majority of the GCC’s Indian migrants are blue-collar workers who returned home during the pandemic. Vaccinations and the resumption of travel helped more migrants to resume work in 2022 than in 2021. GCC’s price support policies kept inflation low in 2022, and higher oil prices increased demand for labour, enabling Indian migrants to increase remittances and counter the impact of India’s record-high inflation on the real incomes of their families.

Third, Indian migrants may have taken advantage of the depreciation of the Indian rupee vis-à-vis the US dollar (10 percent between January and September 2022) and increased remittance flows2.

Remittance costs are measured by the World Bank by sending USD 200 to the destination country. Global remittance costs remain high, with an average of 6.0 percent global average in the fourth quarter of 2021, but with variability across regions. South Asia region at 4.3 percent records the lowest cost, while Sub-Saharan Africa records the highest cost at 7.8 percent. The target for SDGs (Sustainable Development Goals) in 2030 is 3.0 percent. Corridor-specific remittance cost data suggest that costs are lower when digital methods of remittance are used, and high when normal banking channels are used.

The Chief Executive Officer (CEO) of McKinsey and Co. has assessed that India will be the world’s future talent factory as it will have 20 percent of the global workforce by 2047.  But focused and India-centric economic and strategic diplomacy is needed to translate the above in sustainable large inward remittances. Encouragingly, there are indications that Indian policymakers recognize the above as illustrated by select examples provided below.

Students as a future source of remittances

India is also pursuing greater ease in obtaining student visas for its citizens. Students have the potential to generate remittances in the future.

There are many high-income countries which are experiencing ultra-rapid ageing of the population, and therefore are seeking to augment their labour force by relaxing work visa and other immigration requirements. India on its part is also engaged in improving the skills of its workforce and providing formal recognition of the skills obtained, enhancing the value of its workers both domestically and internationally. Select examples of such countries with opportunities for Indian diplomacy to facilitate the expansion of the Indian diaspora and of future remittances are provided below.

India’s recent record in receiving inward remittances has been impressive. But changing nature of geopolitics, and of globalization toward ‘friend-shoring” which encourages deeper economic ties among like-minded allies, has made the role of economic and strategic diplomacy critical in sustaining future inward remittances into India. India’s rising economic and diplomatic profile globally, and its competent pursual of new generation economic (not just trade) agreements, including with high-income demographically ageing countries, could facilitate this task.

This article was originally published in MyIndMakers as Indian Diplomacy Must Aim to Expand Greater Global Economic and Education Space for Indians to Sustain India’s High Gross Inward Remittances on December 15, 2022.