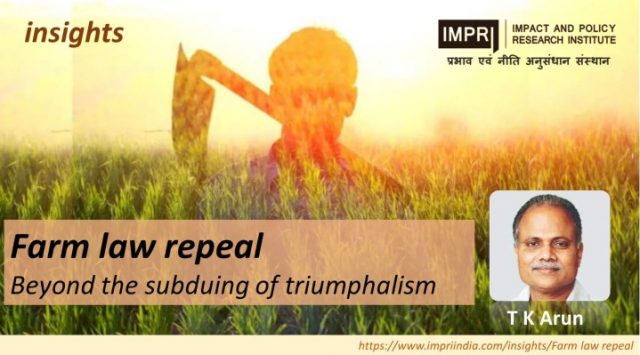 A setback it is, but it is too early to pronounce political defeat for Modi, as a retreat can be used for a lethal attack later.

It is welcome that the government has decided to repeal the three controversial farm laws. It is a definite political setback for Prime Minister Narendra Modi and reflects the BJP’s political vulnerability in Uttar Pradesh. It is a victory for democracy and agitational politics as a corrective tool when Parliament ceases to be a forum of informed decision-making and stands transformed into a rubber stamp for the will of a partisan majority in thrall to a single, charismatic leader.

However, it would be facile to characterize the repeal of the farm laws as a political defeat for Modi: that depends on to what extent the BJP is able to use this step back on the farm front to appease aggrieved farmers in Uttar Pradesh, Uttarakhand, Punjab, and Haryana and to win back, in Punjab, estranged ally Akali Dal, and woo a new ally, Captain Amarinder Singh, ready to tango even with the devil, to pay back the Gandhi siblings for his ‘humiliation’.

And agricultural policy is back to square one, with overproduction of grain and shortages of lentils, oilseeds, fruit, flowers, and animal protein, on the one hand, and with the farmers struggling to make ends meet, on the other.

Who should get the credit for forcing Modi of the 56-inch chest to retreat on the political front and apologise to the nation? The agitating farmers, first and foremost, who have spent more than a year on the road, braving sun, rain and bitter cold.

Credit also goes to Mamata Banerjee, who showed that the Modi-led BJP juggernaut can indeed be halted and pushed back, by trouncing the BJP in the West Bengal Assembly elections. And it would be unfair to the junior Minister for Home at the Centre, Ajay Mishra, and Uttar Pradesh Chief Minister Yogi Adityanath, to disregard their sterling contributions to weakening the BJP’s hand in Uttar Pradesh and enhancing the incentive to placate a crucial section of western Uttar Pradesh voters, aggrieved by the farm laws.

Of course, this is not the first time the Modi government has swallowed its pride and washed it down with a big gulp of pro-people righteousness. After Rahul Gandhi’s suit-boot-ki-sarkar barb, the Modi government had, early in its first term, dropped its land acquisition bill and taken political cover behind the states’ prerogative to formulate their own laws on land acquisition.

This time around, too, Modi was careful to not admit any mistake on the substantive contents of the law. The fault lay in his ability to convince a section of farmers, he said. The reality is that the politics of reform is less a matter of persuasive dialogue and more one of creating viable, and better choices for those whose livelihoods are disrupted by the proposed changes.

Addressing the nation, the Prime Minister waxed eloquent on the precarious dependence of 80 percent of India’s farmers on tiny patches of land, their only, choke, asset, for their subsistence. This is a belated indictment of his own erstwhile land acquisition bill. The previous UPA government’s law on land acquisition had imposed conditions that would have forced adequate compensation of farmers for alienation of their land, the only means of eking out a subsistence for those masses for whom Modi’s throat had swelled with emotion today. Those onerous requirements had been the target of Modi’s land acquisition bill.

The solution to rural precarity lies in dynamic growth of urban sectors of the economy, which would absorb masses of the rural poor struggling to subsist on tiny farms either as owner-cultivators or as farmhands, along with reforms in agriculture that optimise crop selection to agro-climatic conditions, shift from subsidy to investment and incentives for switching crops from grain to those in short supply.

That will call for consolidation of farming operations, better seeds and crop husbandry practices, availability of steady, reliable electricity in rural areas to power agro-processing industry and climate-controlled storage. For such things to happen, consolidation of farm ownership is not always necessary. The key is economies of scale. Amul-model cooperatives and newer, potentially more dynamic, farmer-producer companies and their aggregated forms can bring about economies of scale and empower small farmers to deal with large agri-businesses without being pressured or intimidated into unfair transactions.

Such reforms must accompany, if not precede the shift from state-supported security to market-oriented uncertainty that the three farm laws sought to bring about. These reforms should be pursued even now, even as the laws are repealed. India cannot and should not continue to produce grain mountains it cannot consume or sell abroad without subsidies.

In politics, as in war, retreat is not necessarily defeat. You might take one step back to shuffle to one side and take two steps forward. You might retreat from a battle you are losing, to attack on another front, and win the war. Repeal of the farm laws is a setback, not a defeat, at least not yet, for Modi-BJP.

It is also an important lesson in democratic politics, for all parties and institutions of the polity, including the Supreme Court. Just because we have the institutions of representative democracy, elected legislatures, a Constitution and the Courts, it does not mean that mobilisation of people to articulate their anguish on the street is an excess, rather than an integral part of democracy. If the farmers had stayed back in their homes and issued vehement statements on Twitter every morning, that would not have had the impact their being out on the roads leading to Delhi for over a year has had. If that sounds like a critique of Rahul Gandhi’s politics, that is unintended coincidence, of course.

Suppose Yogi Adityanath had run an efficient, effective administration in Uttar Pradesh, excelling in something more than Muslim-baiting and whipping up communal polarisation, popular support would not have been so fragile as to be thrown by the disaffection of a section of prosperous farmers in western Uttar Pradesh, who stand to lose, when the farm laws begin to bite, their assured incomes from procurement of eminently superfluous grain — government stocks are three times as large as the buffer stocking norm — at ever-increasing prices.

If Ajay Mishra’s arrogance in the impunity of power had not affected the vision of his son and drivers in a convoy of cars, they would not have mowed down protesting farmers in Lakhimpur-Kheri and inflamed popular anger. That too has increased the pressure on the BJP leadership to pare as many layers of political resentment as they can.

Putting triumphalism on the defensive is always good for democracy. If there would be any greater gain from the repeal of the farm laws depends on the outcome of next year’s Assembly elections.

Read another piece on finance and economy titled RBI’s Retail Direct: No Masterstroke, Just Breaststroke Outside the Water in IMPRI insights