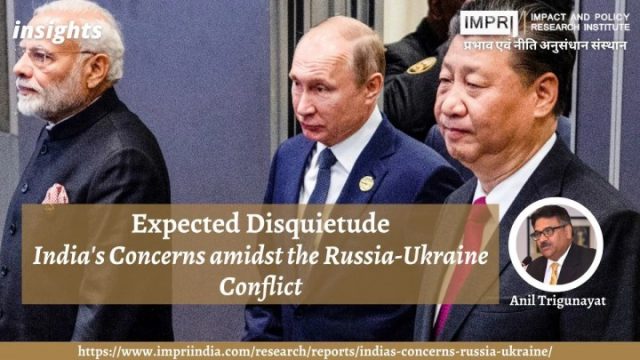 While the eyes of the world are focused on Russia’s invasion of Ukraine, here in India our gaze remains fixed on China – even as the positions of India and China at the United Nations Security Council (UNSC), on the need for dialogue and diplomacy over conflict and casualties and regard for sovereignty, and security concerns for all, are broadly similar.

Dr Jaishankar, Indian External Affairs Minister, during his recent visit to Germany and France, indicated that the attention of the United States (US) and Europe towards only the Russia-Ukraine crisis could be counter-productive as they get bogged down at the expense of threats in the Indo-Pacific. Challenges in the region should be dealt with collectively and could extend to Europe as ‘distance is no insulation.’

India has a troubled relationship with China, more so since Galwan incident and invasion in 2020, even as it collaborates with them in the RIC (Russia-India-China), BRICS (Brazil, Russia, India, China, South Africa), and SCO (Shanghai Cooperation Organisation) regional formats. Yet India follows the policy of dialogue and diplomacy over disputes with Beijing while promoting it in other conflictual contexts, including in Russia-Ukraine.

The growing relations between Russia and China in recent years have been accompanied by an increasing disregard for international norms and rules which may have some consequences for India’s security concerns even as Russia remains India’s special and privileged strategic partner with historic support to India, whenever needed. But the geopolitical order is changing, and the Sino-Russian axis is looking to carve out its place therein. We might be looking at a more vehement Cold War 2.0 post-Ukraine and Taiwan crises.

Over the last 12 months, India’s neighbouring geography has faced drastic security challenges. From the Taliban’s takeover of Afghanistan to the renewed military dictatorship in Myanmar, or the continued border dispute along the Himalayas with China, India finds itself surrounded by new and emerging security threats. In all these, the Chinese factor and Russian interests have been overt and occasionally appear to undermine the Indian position and interests.

The American strategic rivalry with Moscow and with Vladimir Putin has made Russia move in a closer strategic concert with Beijing, which was amply evident during the inauguration of the Beijing Winter Olympics, where President Putin was the chief guest endorsing their strategic friendship. The two also signed a Peace and Friendship Treaty as well as long-term oil and gas arrangements exceeding $100 billion. China responded to Russian troops entering eastern Ukraine earlier this week, calling for all participants to remain calm before ultimately backing Moscow against NATO, with Zhang Jun, China’s permanent representative to the UN, saying “Russia’s legitimate security concerns should be heeded and addressed.”

The West obviously considered this as a clear signal of these countries’ growing indifference to established diplomatic procedures and states’ sovereignty. Later at the UNSC, China asked for restraint and dialogue to take place. But Sino-Russian relations are the strongest they have been in the last 70 years, with President Xi even calling Putin his “best friend” during a visit to Russia in 2019.

A Shift in Kazakhstan’s Position

Many commentators in Washington suggest that China and Russia see a shared interest in a Russian armed adventure in Ukraine that tests President Joe Biden’s resolve. Some even argue that President Xi might watch an unchallenged Russian attack on Ukraine and conclude he can safely invade Taiwan. While such arguments remain more conjecture than analysis, they argue that recent developments in Kazakhstan demonstrate how China-Russia rapprochement is deteriorating fundamental norms and contributing towards greater global insecurity. Greater and more severe sanctions against President Putin, Russia and China would force them to ally even more.

At the beginning of this year, Kazakhstan faced its greatest moment of unrest since its independence from the Soviet Union in 1991. A series of public protests that commenced in the southeast of Kazakhstan, after a decision to deregulate and raise the prices of liquified petroleum gas, quickly spread to other regions. The protests morphed into a wider movement fuelled by rising dissatisfaction with the government and economic inequality. Until this moment, Kazakhstan had been the most stable country in Central Asia and was progressively aligning itself with Europe and the West, while maintaining cordial and pragmatic relations with other major powers.

A Shift Towards Russia and China

Worryingly, however, the response by the Kazakhstani government to these legitimate protests followed a model of government more resembling that of Russia and China. Kazakh President Kassym-Jomart Tokayev issued ‘shoot-to-kill without warning’ orders on protesters who were considered terrorists, resulting in at least 227 deaths. Tokayev then invited Russian troops in to “stabilise” the country and arrested over 7,000 peaceful protesters in the process.

The Kazakhstan Prosecutor General’s office admitted that six people had died from torture while in custody since the beginning of January. President Tokayev blamed the protests on terrorists and Western foreign powers attempting a coup d’état against his government. He has spuriously tried to pin the blame on political predecessors and modernisers such as two-time Prime Minister Karim Massimov. He was able to get rid of the overriding legacy of his boss in the bargain to assuage the public outcry.

It was a narrative that both Russia and China were happy to corroborate. President Xi called the events in January a plot by foreign forces to instigate a ‘colour revolution’ in Kazakhstan. Russia and China both share strong interests in Kazakhstan. For Russia, ensuring that Kazakhstan, a resource-rich former Soviet state, remains in the Russian sphere of influence and can be a foothold for its interests in the region has been a clear priority since the dissolution of the USSR.

China announced its Belt and Road Initiative (BRI) in Kazakhstan in 2013 and since then, the country has remained an important focus of China’s foreign and economic policy as a transit country between East and West. But one needs to also keep in mind that Russia would only allow foreign influence to a degree in its own backyard, hence for the first time President Putin deployed CSTO (Collective Security Treaty Organization) forces in a quick and swift response with an early exit.

Last week, China agreed to deliver large amounts of military equipment to its iron-clad friend Pakistan, including 25 J-10C fighter jets. These arms deliveries to Pakistan are a clear attempt to amplify the threat from Islamabad, while China continues to drain our defence resources with the border stand-off in the Himalayas. India needs to rethink its national security plan.

As Russia was undertaking action in Eastern Ukraine to ‘demilitarise’ and supposedly protect the Ukrainians themselves from the tyranny of their own people, Pakistani Prime Minister Imran Khan was in Moscow calling these ‘exciting times’ while looking for support with an oil pipeline from Kazakhstan, financial help, arms, and ammunition. It also showed that if Biden cannot even make a call to him, he has other benefactors.

The lessons from Afghanistan, Ukraine, and Kazakhstan and our ongoing rivalries with the China-Pakistan axis show us that in this new security landscape, India must be prepared for the unthinkable and identify other options while exercising its strategic autonomy and multi-alignment approach.

Difficult to wade through, as both superpowers suffer from the ‘Alliance Syndrome’ and zero-sum games. Even as India abstained from the vote in the UNSC, it has always stood against the external military interventions from Iraq to Libya, to Yemen, Syria, Georgia, and Ukraine and pursuing instead dialogue and diplomacy for conflict resolutions. It regretted that in the Russia-Ukraine crisis, which is part of a larger geopolitical dirty game, diplomacy was not given a full chance. That’s the way out, as Prime Minister Narendra Modi in his calls with President Putin and President Zelenskyy indicated.

First published at The Quint, Why China and Russia’s Strategic Partnership Should Be a Concern for India, on March 1, 2022.