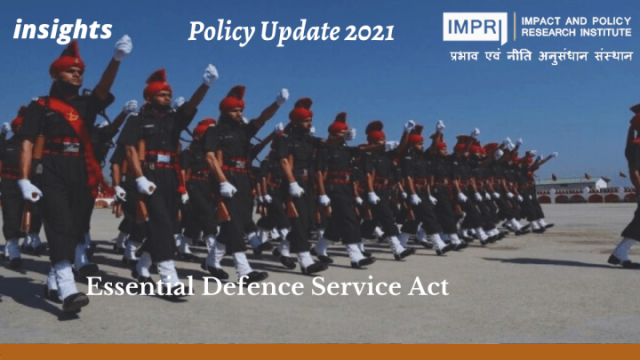 The Essential Defence Service Act was passed by the Parliament with duly attested by the President of India, on the 11th of August 2021. The Act endeavors to accredit the Central government with the power to regulate the uninhibited supply of arms, ammunition and similar other goods and services to the Armed Forces in circumstances of strikes, layoffs in factory units which are deemed essential in defence services. The Act also strictly stipulates disciplinary action against people involved in the same, which includes expulsion and dismissal from the contract of service.

The key features of the Act are as follows:

Essential Defence Services:  The Essential defence services have been defined and is deemed to include such services in which: (i) any enterprise or venture involved in the manufacturing and production of equipment, goods or services necessary for defence related intentions, or (ii) any enterprise of the armed forces directly or indirectly linked with the same. These shall involve vital services that, if halted, would impact the security and safety of the enterprise involved in such services or its working force.

Furthermore, if the Government deems fit, then it shall also have the power to brand any service as an Essential Defence service, on the grounds, that its termination would impact the: (i) manufacturing of defence equipment or goods, (ii) functioning or preservation of industrial establishments or u segments involved in such production, or (iii) maintenance or renovation of products associated with defence.

Public utility service: The Act also seeks to amend the Industrial Disputes Act, 1947, whereby it has now included Essential Defence Services under the umbrella of Public Utility Services.  As per the Act, in the event of Public Utility services, a mandatory notice of six-week notice is to be given before: (i) individuals associated with such services strikes, that is considered to be in a clear breach of contract or (ii) employers involved in such services do lock-outs.

Strikes: The bill has defined strike as sudden halting of work and service by a group of persons taking action together.  This includes: (i) Group casual leave, (ii) Synchronized refusal of any persons or a group of persons to carry on with work or receive employment, (iii) withholding overtime work, wherein the concerned work is vital for the maintenance of essential defence services, and (iv) any additional deeds and action which have or may have the repercussion of disrupting work and services under Essential Defence Services.

Prohibition on strikes, lock-outs, and lay-offs: The Act, also confers the central Government with the power to prohibit lock-outs, strikes and lay-offs in enterprises engaged in essential defence services.  The government hence has the power to promulgate such direction and orders if deemed imperative in the interest of: (i) integrity and sovereignty of India, (ii) security of the Republic or any state, (iii) public decency and morality,or (iv) public order.

Punishment for Illegal strikes, lock-outs and lay-offs: The Act further lays down that those employers found contravening the prohibition order by means of illegal lay-offs or lock-outs shall be punished with a fine of Rs 10,000 fine, or with up to one year of imprisonment

Individual (s) initiating, organizing or participating in illegal strikes shall be liable of punishment with a fine of Rs. 10,000 and imprisonment up to one year or both.  Furthermore, such an individual shall face disciplinary action which includes dismissal from service as stipulated in the act. The concerned authority is also vested with the power to dismiss the employee without any plea or inquiry. All offences that are adjudged to be punishable under this Act shall non-bailable and cognizable.

The Act was legislated with the aim to counter the protests and strikes that arose when the Government declared the corporatisation of the Ordnance Factory Board.

The ordnance factories constitute a coordinated and integrated base for the indigenous manufacturing of defence equipment, with the fundamental goal of self-sufficiency in arming the defence forces with world class arms and ammunitions

Following the legislation of the Act, apprehensions gained ground that the Government is curtailing the fundamental Right to Protest. On that note, the government has clarified that the principal purpose of this ordinance was aimed to enhance and improve the productivity and overall efficiency along with increasing liability of these factories.

However, faced with the fear of termination and job loss, many worker bodies have been announcing indefinite strikes until the repeal of the ordinance. Thus, in order to counter “such menace” the Government legislated the Essential Defence Services Act.

As preliminary research shows, about 70,000 employees of the present 41 ordnance factories in the country, who have expressed reservation with the corporatization of OFB, dreading that it will affect their employment, retirement and service conditions. Many activists are also of the opinion that the Act is violative of the Fundamental Right guaranteed under Article 19(1) of the Indian Constitution.

But what needs to be kept in mind in this regard is that Strike is considered to be a statutory right under the Industrial Disputes Act of 1947 and not a Fundamental Right as adjudicated by the Supreme Court in Kameshwar Prasad v. The State of Bihar (1958). It is only through proper discussion and deliberations between the Government and the concerned parties that a mutually accepted decisions can be arrived upon.

Anondeeta Chakraborty is a Research Intern at IMPRI. She has graduated with a Bachelor’s degree in Political Science from St.Xavier’s College (Autonomous), Kolkata, and is currently pursuing her Masters Degree in Politics with Specialization in International Studies from Jawaharlal Nehru University, New Delhi.