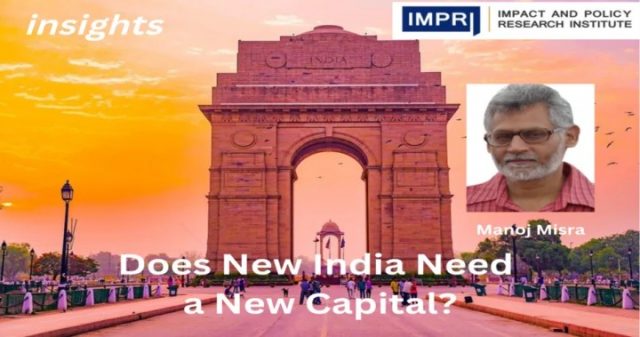 A city can be looked at through various lenses. One is like an organism, an animal actually. In the case of Delhi the nearest analogy is an overgrown pig, wallowing, come winter in a pond of slush, making others loath to come near or touch it. This is experienced in all its grotesqueness as the plane begins to descend on its approach to the city. It seems like entering a sea of grey mass with visibility suddenly dropping to zero as you look out from your window seat. You shudder to think how the pilots are finding their moorings in low to zero vision. Experience prevails over fear and your plane lands safely.

Exiting from the IGIA your eyes are first to experience the worst and begin to water. You ask the taxi driver, how are he and his family faring in such an adverse environmental condition? Arre saheb, kya karein, yeh to hamari kismet hai (my bad luck, what to do!). Strangely he is ruing his ill luck and not the city politicians and managers? Is this how the wily politicians and the authorities escape responsibility and accountability?

I too had been a dilliwala (a Delhi resident) for more than two decades, before realising that enough was enough and it was best to keep away at least during the winter months or continue to suffer irritating heaviness in the head. But hadn’t dilli ki sardi (Delhi’s winter) been a much sought after season in the good old days? Indeed, it was a pleasure when I first came to the city on posting in the mid 1990s. Delhi was then experimenting with CNG driven mass transportation to keep ambient diesel fumes away. It was still a sub-10 million city and another decade away from personal cars becoming commonplace to bring vehicle generated fumes back with a vengeance.

India was trying hard to shine economically but losing badly on its natural environment front. Worrisome climate change as man made phenomenon was still mentioned in the future tense and annual ingress of soot from burning paddy crop residues from Punjab, Haryana and western UP was mild in its ferocity. The breaking point for the city came first in the immediate aftermath of cracker rich Deepawali festival of 2016. There has been no going back since then and Delhi has attained the dubious distinction of being the most polluted city anywhere, year after year on a stretch, with no respite in sight. Sigh!

It is a strange irony today that while Delhiites continue to suffer, mostly in hapless silence, the city politicians are busy electioneering elsewhere and the world leaders are busy ‘saving’ the earth at the 27th CoP of UNFCCC (6 – 18 November 2022) in Sharm El Sheikh, Egypt. But who shall save Delhi and its current 20 million denizens and how?

Runaway consumerism at the root of manmade climate change

Whether still spoken in whispers or openly at Sharm El Sheikh, the stark reality is that runaway consumerism exhibited by us humans mainly in the 20th and 21st century is at the root of man-made climate change. Nothing proves this more than the vulgar consumerist behaviour exhibited by people in overgrown cities aided liberally by the advertising juggernaut. This compels nations to produce more and more energy to manufacture goods and service consumerist aspirations often at humongous use of both dirty fuel (read fossil) and water and unsustainable mining and use of materials. Clearly de-urbanisation or downsizing cities to curb runaway consumerism is an urgent need to adapt to the challenges thrown by the ill effects of climate change. Indian prime minister’s call at UNFCCC CoP26 at Glasgow (UK) to adopt LiFE (Lifestyle for environment) as a campaign to influence personal choices and behaviour for climate action is a notable pointer.

We are now 8 billion on earth

Human population on earth has just crossed the 8 billion mark. Projections at the CoP27 talk of 50% (4 billion) of this population being in need of ‘help’ to become resilient to the ill effects of climate change. Many of these climate vulnerable people would be living in urban conglomerates like Delhi. Poorly or unplanned urbanisation has become a double headed scourge. On the one hand urban centres are already behaving as neo colonial centres extracting the human and natural resources from the hinterland, on the other these offer abysmal living conditions and livelihood opportunities to millions who rush to them in hope of a bright (sic) future.

It is the impoverished people living both in the  hinterland and the less fortunate ones in the urban conglomerates who shall be in the need of that ‘help’ to withstand CC engendered extremes of high ambient summertime temperatures as well as instances of urban flooding from frequent cloud bursts.

The sad state of today’s Delhi, where no season summer, rainy or winter is without serious environmental challenges to its residents is the outcome of a disparate range of causes from its geography to unbecoming size to irresponsible citizenry and unaccountable politicians, to too many cooks as city managers often working at cross purpose. This together has turned into a perfect recipe for urban chaos and mayhem and a cut throat competition amongst the politicians to stay relevant. In short Delhi is today a classic example of what an urban conglomerate should not be. Worst is that almost everybody here is at a loss to decipher a roadmap to its deliverance from the morass it has degenerated into.

Is there a way out?

Desperate situations require desperate solutions and out of the box thinking away from the business as usual (BAU) approaches, which have repeatedly failed.

Yes it is a fact that Delhi has been the principal city of Hindustan for centuries. But then Hindustan wasn’t the India of today. It was the British which created New Delhi in the 1930s to replace Calcutta (now Kolkata) as the new capital city of British India. It was a matter of both political and strategic convenience for the colonial masters. Independent India need not have followed suit but it did. There is little on record to suggest that much thought had been given to the relative advantages and disadvantages of Delhi as a suitable location for the national capital of independent India other than perhaps the obvious attractiveness of the existing colonial infrastructure available in New Delhi and that the government was already running therefrom.

At independence in 1947, Delhi at little short of 7 lakh people was a mofussil town, with a healthy Yamuna skirting it on its east? But soon everything was to change in the aftermath of country’s partition. Refugees made a beeline for Delhi to overstretch its existing infrastructure with the city growing almost overnight to more than 17 lakhs. As the national capital it also became a preferred destination for people from all over. Rest as they say is history.

Creation of a new national capital away from Delhi at a well thought out location could be an opportunity to build a truly economically, environmentally, socially, climate resilient and size conscious urbanscape which on one hand could become a sustainable model for elsewhere but help kick start a national green growth (sic) agenda (a favourite at CoP27 in Egypt) and most importantly spare Delhi its certain doom.

This article was also published in The Dialogue as High Time For India To Get A New National Capital on November 10, 2022.