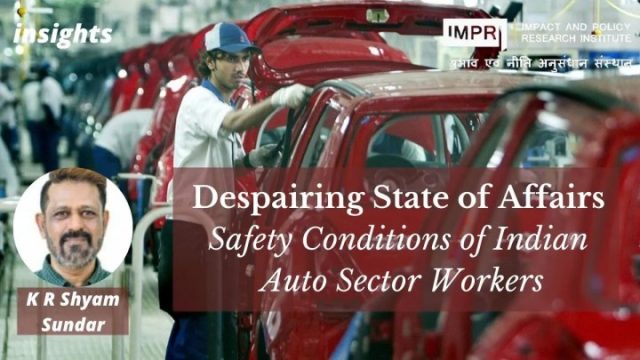 The Safe in India Foundation released its third annual report – CRUSHED 2021 – on the state of worker safety in the Indian auto sector, on Republic Day. The report makes for sobering reading. It brings to light that even after 74 years of the adoption of the Indian Constitution, we have still not been able to provide the right to work in safe and humane conditions in formal and informal workspaces, and the right not to lose one’s life and income-earning opportunities, as guaranteed by Articles 21 (protection of life and personal liberty), 39(a) (right to adequate means to livelihood) and 42 (provision for just and humane conditions of work and maternity relief) of the Constitution.

The auto sector is the modern face of the manufacturing sector in India. It accounts for a little over seven percent of India’s GDP [Gross Domestic Product], and directly employs eight million people as well as 29 million people indirectly.

The Society of Indian Automobile Manufacturers estimates that by 2026, the auto sector would account for 12 percent of India’s GDP and employ around 102 million people. During the period of April 2000 – September 2021, this sector attracted five percent (US$ 30,784 million) of India’s total foreign direct investment.

It boasts of many well-known Indian and foreign multinational corporations operating in India. But are the automobiles it produces unstained by blood? The answer, as indicated by CRUSHED 2021, is a resounding No. Even if the report covers a small segment of the vast auto sector in Haryana (Gurugram and Faridabad), it represents India.

Some of the report’s findings

Eighty percent of the injured workers were located in the supply chains of some of the well-known auto brands. Seven out of ten injured workers lost their fingers or hands, which means temporary and/or permanent disability to work. A typical crush injury, on average, results in loss of two fingers, and if caused by a power press, the extent of damage to fingers and the probability of losing the entire hand is greater.

2,584 workers employed in the supply chain have suffered crush injuries in the auto sector in Haryana. Seven out of ten injured workers lost their fingers or hands, which means temporary and/or permanent disability to work. … it is the flexi-category and most vulnerable workers who incurred severe injuries. Nine out of ten workers were migrants coming mainly from Bihar, Uttar Pradesh, and Odisha. 70 per cent were contract workers, and 80 per cent were lowly educated (up to 10th standard) and earned less than Rs. 10,000 per month. None of these over 2,500 workers belonged to a trade union.

Not unexpectedly, it is the Flexi-category and most vulnerable workers who incurred severe injuries. Nine out of ten workers were migrants coming mainly from Bihar, Uttar Pradesh, and Odisha. Seventy percent were contract workers, and 80 percent were lowly educated (up to 10th standard) and earned less than Rs. 10,000 per month. None of these over 2,500 workers belonged to a trade union.

Predictably, 70 percent of the injured workers got their medical coverage under the Employees’ State Insurance Act [ESIA] e-Pehchan card not on the date of their joining as they must, but post their injuries. More interestingly, the report observes that it was aware of “many instances” where the premium under ESIA was deducted from their wages but not deposited with the ESI Corporation (p.18).

The ESIC is aware of this phenomenon and terms it comfortingly as “Post Accident Registration” [PAR], a contradiction of sorts given the statute. Ideally, both the defaulting factory owners (the occupiers) and the ESIC officials must be penalized: the former for non-compliance and the latter for dereliction of duty. It is appalling, even unforgivable, to note the incidence of PAR.

The Report notes that lowly educated helpers were often asked to operate dangerous machines like power presses without adequate training and of course, at lower wages. Only two percent of the power press operators received formal training at an institute, none in the factory, and most learned from their supervisors or senior workers. The pursuit of flexibility cannot get worse or more dangerous than this.

Forty-seven percent of the injured workers worked 12 hours or longer shifts. Rule 28 of the Occupational Safety, Health and Working [OSH] Conditions (Central) Rules, 2020 stipulates that inclusive of intervals, the spread-hours must not be more than twelve hours a day. It is not uncommon to hear numerous instances narrated by workers in many industries having supply chains to have worked a 12-hours shift at eight-hour wages.

What adds woe to concern are two facts reported here, viz. under-reporting of accidents by establishments to government agencies, and a declining trend in factory inspections in Haryana.

Issues raised, and how to address them

The report provides operational recommendations for OEMs like taking full responsibility for worker safety in their vendor units and weeding out habitual offenders, among other things. To add to these, I suggest that the OEMs create a labor standards rating system of vendors akin to quality rating and stop giving business to lower ones. It also means walking away from their typical choice of “low-cost bidders”. Otherwise, humane work in the supply chain is not possible.

Lowly educated helpers were often asked to operate dangerous machines like power presses without adequate training and of course, at lower wages. Only two per cent of the power press operators received formal training at an institute, none in the factory, and most learnt from their supervisors or senior workers.

But this Report poses scorching questions to the government in four ways. First, the government needs to strengthen the regulations concerning safety, including the provision of compulsory training to workers on or off-site. The OSH Code must make the constitution of Safety Committees mandatory instead of the notification method existent. It must provide for submission of Safety Audit Reports by all establishments.

Put simply, the lawmakers have a lot more work to do regarding OSH Code. Second, inspection machinery, as opposed to the current trend of liberalization, must be strengthened to cover the supply chain adequately. Third, the statistical system relating to industrial accidents must be vastly improved to cover all sectors and all the units. Fourth, the ESI Corporation’s efficiency needs priority attention from the government.

The United Nations Sustainable Development Goal 8.8, which is the promotion of safe and secure working environments for all workers, including migrant workers and those in precarious employment, needs special attention from all stakeholders.

The report also brings to attention under-reporting of accidents by establishments to government agencies, and a declining trend in factory inspections in Haryana.

Finally, the role of trade unions in securing these is crucial. Their very absence (failure on the supply side) weakens both the unions as institutions and their goal of workers’ welfare.