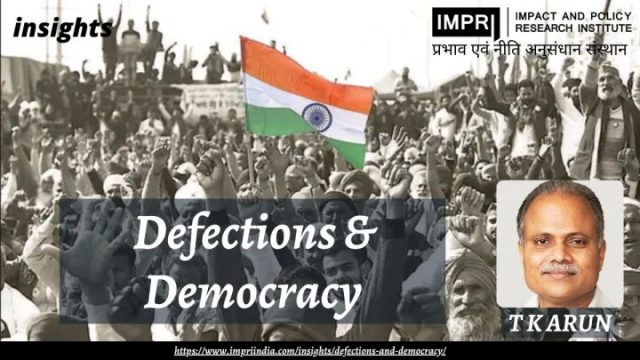 The Eknath Shinde government in Maharashtra is alive and kicking. So are the governments of Madhya Pradesh and Karnataka, both birthed out of the feeble bodies of previous governments that had been blown up. Clearly, the anti-defection law is dead. Do we have a new fix?

A right to recall holds attraction. But all institutional safeguards are only as good as the political sensibility of the citizenry. If, as voters, they choose to give their blessings to defectors seeking re-election whose defection unmakes and makes governments, that institutional solution would also fail.

Put Democracy to Good Use

Building a democratic sensibility is the only solution to the malaise of defection. India has the rituals and institutions of democracy – elections, legislatures, a judiciary institutionally separated from the executive and the legislature, an institutionally free media and so-called civil society organisations that pick up the ball dropped by media in matters of holding the government to account. But these alone do not a democracy make any more than an anatomically intact cadaver has life. Only when a vigorous democratic sensibility courses through the body politic do norms, procedures and institutions work as intended.

To the hungry man, god appears in the form of bread. Given India’s extensive poverty, is it sensible to expect voters to choose democracy over direct benefit transfers, free grain and other benefits distributed by an incumbent government, topped up with cash hand-outs on the eve of polling? The answer depends on the narrative they hear.

It is not just in poor parts of the world that democracy is in trouble. In the US, democracy is at constant risk. Look at the mass shootings, incredible conspiracy theories – including one that portrays Donald Trump as the man sent by god to deliver Americans from the clutches of a devil-worshipping, child-abusing Democratic deep state – and disbelief in mainstream mass media.

The recent ruling of the US Supreme Court that there exists no inherent constitutional right to abortion in that country probably presents an opportunity to cut through the cant and address some fundamental questions as to the limits of control by other people, mediated by the state, over one’s own body, and the principles, programmes and institutions that underpin such control. American women have been happy to be complicit in conservative political programmes that threaten their fundamental liberties, because they could assume that those threats were held at bay by what seemed to be rock-solid constitutional arrangements.

Now that this assumption has been demolished by their Supreme Court, they are forced to look at things afresh, and decide where their self-interest lies. If the Democrats prove incapable of making good on this opportunity, American democracy could well be subverted this decade, under a re-elected President Trump.

There is no perfect democracy anywhere in the world. Even in Switzerland, where they hold a referendum every now and then, a culture of exclusionary insularity prevails. The Swiss voted, not too long ago, to disallow the construction of new mosques, curtailing the right of a tiny minority to worship as they deem fit.

Light at the End of the Funnel

There is no readymade model of democracy that India can adopt. Athenian democracy meant propertied men taking decisions on behalf of themselves, slaves and women be damned. The state of the oldest democracy is precarious. The land of liberty, equality and fraternity has just now handed the xenophobic party of Marine Le Pen its biggest tally in elections to the French national assembly. In the ‘Mother of all Parliaments’, an unprincipled liar is waging a proxy war, with the help of Western allies united by their desire for geopolitical dominance, at the expense of the climate, global growth and the world’s poor.

India has to build its own democracy, in its own way. No foreign imports are available to exorcise India’s internal demons, its tendency to fragment along the lines of caste, religious community, region, language and ethnicity, the facile temptation to mobilise on sectarian lines on the strength of sectional hostility, the inherent readiness of many of its institutions and those manning them to crawl when vaguely gestured to bend, the absence of a national narrative to which everyone is party, given not just linguistic diversity but also disparate socioeconomic conditions and a credulous population with ready access to ruthlessly manipulative social media.

Yet, all is not lost. Kerala built a culture of self-empowerment through organisation on the lines, first, of subaltern caste and, later, of class. Admittedly, that democratic dynamic has dissipated and much has reverted to type. But that initial burst of change holds out the hope that it is replicable across the land, parts of which still resemble Kerala in late 19th century, when change began.

If ‘We the People’ can be persuaded to believe in a vision of the future, in which they are empowered to make sustainable, steady progress to a better life, free from the oppression and indignities to which they are constantly subjected in the lived present, democracy can take root. That belief will come not from speech but from organised action, mobilisation on the ground.

This article was first published in Economic Times as Let’s not duck democracy: The only solution to the malaise of defection.