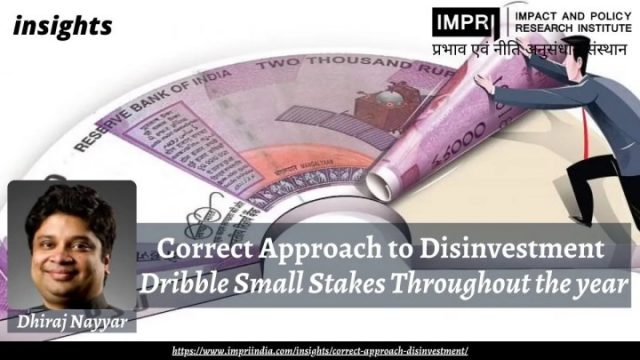 One of the defining features of the present government has been the practice of setting targets-well defined, quantifiable goals across sectors, which are then efficiently implemented in a time-bound manner, usually in mission mode. Frequently, targets are revised upwards. The one notable exception is disinvestment. The target for disinvestment receipts (which includes sale of minority shares) has been reduced in successive budgets from *1.75 lakh crore two years ago to ₹78,000 crore last year to just 65,000 crore in this financial year.

The underwhelming Life Insurance Corporation (LIC) initial public offering (IPO) is unlikely to help accelerate the slow pace of divestment, both privatisation and offloading of minority shares. In strategic disinvestment, the Cabinet approved more than 20 PSUs for sale in 2016 and 2017. Five years hence, only two have been privatised: Air India and Central Electronics Ltd (CEL), with the latter, staying by court order. Pawan Hans may have been the third, but was halted late in the day because of red flags over the winning bidder.

The most common explanations for the snail’s pace are a lack of political will and resistance from line ministries. Both apply more to privatisation than to minority stake sale. Neither is correct. If the Gol lacked political will, it would not have revived the strategic disinvestment programme in 2016 after a gap ith of 12 years. It certainly would not have opted to privatise Air India on priority perhaps the most complex privatisation of all.

While there may be resistance from line ministries in some cases, there are enough PSUs (out of a total of more than 250 in operation) even the line ministries are willing to let go. In many cases, particularly of loss-making PSUs, employees too favour disinvestment since they are not paid compensation on time. In any case, this applies less to IPOs or follow-on public offers (FPOs), which have been rare, even whenthe stock markets were booming.

The real challenges are more practical. The system is not geared to implement disinvestment at scale and speed. Consider the human resources at hand in the Department of Investment and Public Asset Management (Dipam). As per its website, it has one secretary (like every other department) and six joint secretaries. Those who know Gol would know that the cutting edge of the system is the joint secretary level. Of the six joint secretaries in Dipam, one is a financial adviser (who reports to the department of expenditure) and another is an economic adviser (by definition, advisory).

That leaves just four joint secretaries to handle all IPOS, FPOs and strategic sales of more than 250 PSUs. In any case, no civil servant is trained for, or practised in, the art of executing complex merger and acquisition (M&A) transactions. Of course, there promoter-controlled businesses. are external advisers, such as investment bankers and lawyers, who assist. But decision-making is the domain of the officials alone.

What adds to the handicap is the extreme scrutiny each transaction is put through. The assets are owned by the people of India. And there is the constant examination of process and valuations by the Comptroller and Auditor General (CAG), Chief Vigilance Commission (CVC), Central Bureau of Investigation (CBI) and courts even years after the transaction.

These limitations need to be overcome. As the economy passes through an uncertain phase, disinvestment can become an important source for boosting efficiency and growth. It must be accelerated. For this, it may help to stop making each divestment an ‘event’. Instead, for listed PSUs, it should be a continuous process where Gol dribbles small stakes into the equity markets throughout the year. This ensures that the process doesn’t become hostage to market conditions and the market is able to absorb it.

Privatisation also becomes easier of listed PSUs. If Gol brings its stakes down to 51% by continuous drib bling, then a small stake sale of just over 1% would bring government’s equity below 50%. The ultimate aim should be to convert PSUs into widely held shareholder companies without a single promoter (like L&T is). That will also help avoid any controversy of selling too many PSUs to large promoter-controlled businesses.

Those PSUs, including financial institutions, that are not listed should be listed. But their listing should only be viewed as the first step in a long process of gradually offloading the government’s t’s stake so that success or failure isn’t judged by the IPO alone, like in LIC. Gol can also help Dipam by giving it more personnel, including specialist lateral recruits who can be hired from the world of investment banking. The returns to the economy are potentially enormous.

Read another piece by Dhiraj Nayyar Civil Services on Pedestal in IMPRI insights.

Read another piece by Dhiraj Nayyar How should India navigate the increasingly tough global economic scenario? in IMPRI insights.