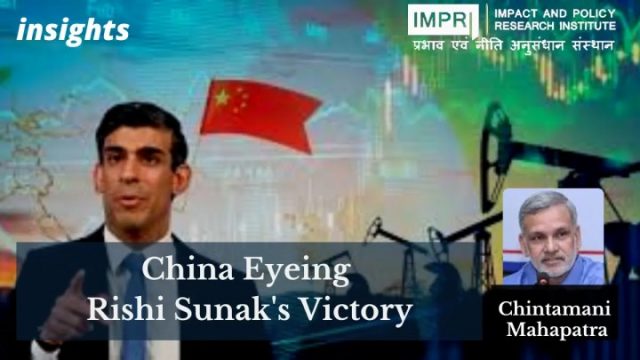 Rishi Sunak’s victory will not be any extra boon for India, and Liz Truss’ rise to power will be no bane to the UK-India relationship.

Major powers of the world are eagerly watching the political drama in the United Kingdom ever since Prime Minister Boris Johnson began to face allegations of violating the COVID-19 guidelines of his own government and then shielding a minister accused of sexual misconduct.

The political scenario became more theatrical when key Cabinet ministers tendered their resignations and the search for a successor became imperative. Of course, the first one to resign from Johnson’s Cabinet was Pakistani-origin Health Secretary Sajid Javid and in a matter of minutes, the Indian-origin Chancellor of Exchequer Rishi Sunak too extricated himself from Johnson’s Cabinet.

All the political eyes are, however, centered on Rishi and Sajid seems to have been buried in oblivion at least for the time being. Many believe that it was Rishi’s resignation that triggered a cascading effect and scores of ministers soon followed in his footsteps.

Rishi is accused of disloyalty, conspiracy, and cunningness. But there is none who seriously questions his knowledge, political skill, and capability. Boris Johnson certainly was reluctant to relinquish his position. And thus when he had to do so under pressure and compulsion, he and his supporters launched a vitriolic campaign against him in social media and Tory circles.

For some, anyone other than Rishi should become the prime minister of Britain. For some, neither Rishi nor his closest competitor Foreign Secretary Liz Truss should become the prime minister. Some are praying that Rishi does not emerge as the top Tory leader. Several campaigners have held him responsible for high taxation, skyrocketing inflation, and economic downturn, while others have raised personal issues, such as his wealth and his wife’s “non-domicile” status to avoid taxation.

When Rishi performed the best in debates on policy issues, the detractors did not doubt his knowledge but questioned his leadership qualities! Although Britain is one of the oldest democracies and has offered some of its models to many countries, including India, voting does not take place in this otherwise highly literate society only on the basis of knowledge of politics and administration.

It is, however, an established fact that in about five rounds of contests where Tory members of Parliament were the voters, Rishi Sunak came on the top in practically every round of voting. If the largest number of Tory lawmakers have chosen Rishi for the final contest for leadership by voting among all the Tory members — about 166,000 — can anyone question the qualification of Rishi to lead the United Kingdom as the next prime minister? If the American voters can choose Barack Obama as the US president and Kamala Harris as the vice president, is it impossible for an Indian-origin Tory leader to become UK’s next Prime Minister?

Initially, there were eleven contenders for the top post and after several rounds of selection, the final two contenders are now Rishi Sunak and Liz Truss. It is important to underline that while Rishi resigned from his post of Chancellor of Exchequer (finance minister), Liz Truss did not, and hence she continues to be the foreign minister. This clearly indicates that the majority of MPs who have voted for Rishi also did not want Johnson to continue in office.

It is also significant to note that 137 MPs voted for Rishi in the fifth round of votes to make him eligible for the final vote by all members of the Tory Party. Liz Truss got 113 votes and Penny Mordaunt got 105 votes and was eliminated. This means the MPs who did not vote for Rishi are, of course, in the majority. Now the big question is whether the supporters of those MPs who did not vote for Rishi in the party rank and file will also vote against Rishi.

The opinion polls taken among the Tory members in the UK suggest that Rishi will not make it to the top position. But opinion polls do not always make accurate forecasts. Second, there is no certainty that Tory members who are opposed to Rishi will necessarily vote for Truss in the final round of voting. Thus no one can tell for certain who will become the next British prime minister. There are weeks to go before the voting takes place and the result is announced on 5 September. In the meantime, campaigns, clean and dirty, will continue as it happens in all democracies.

However, major powers are guardedly watching the political developments in the UK. The most interesting external power in the British leadership race is the People’s Republic of China. Boris Johnson and Foreign Minister Truss have taken a tougher stand on issues, such as Hong Kong, human rights violations in Xinjiang, assertive Chinese policy in the South China Sea, and Beijing’s threatening moves toward Taiwan. Chinese political analysts have a positive image and a better view of Rishi Sunak and expect that Rishi as the next prime minister would be better for China-UK ties.

There are several misplaced excitement and expectations in India about the political achievements of Rishi Sunak. It is natural for people of the same racial, ethnic, or even linguistic stock to feel proud about the achievements of a fellow person anywhere in the world. But as far as expectations are concerned, it is better to be a Buddhist. There is not going to be any major change in the UK-India relationship irrespective of the outcome of the race to the top position in London. Rishi’s victory will not be any extra boon and Truss’ rise to power will be no bane to the UK-India relationship.

Political, economic, and strategic ties between the UK and India have been on a positive trajectory and are likely to remain so after a new regime assumes power in 10 Downing Street.

This article was first published in Firstpost as Let’s not get too excited with Rishi Sunak: Even China is keen to see him at 10 Downing Street on July 24, 2022

Does the road to end the war in Ukraine run through Delhi?| 4 April 2022

The Calculated Move: India’s diplomacy for the Ongoing Crisis| 5 March 2022