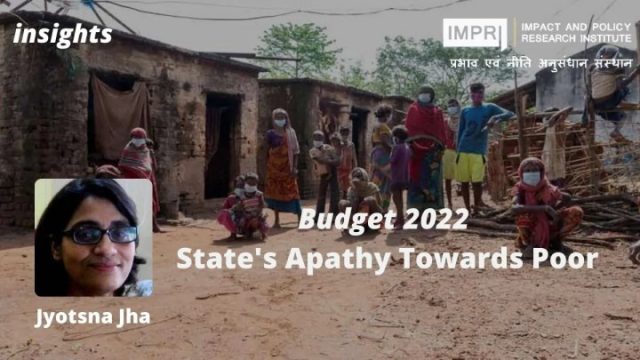 ‘Making our rich poorer is not going to solve the issue of inequality is an often-heard response to any suggestion to tax the super-rich through wealth tax or by bringing back inheritance tax. This is debatable. But can one deny that making our poor less-poorer is indeed going to address the issue of at least insecurity, if not inequality? Budget 2022 fails on both these counts.

It, of course, has no proposal to make the handful of the super-rich in the country part with anything additional, but surprisingly it also does not have anything, except the rhetoric of inclusive development, to make the poor less insecure. This is despite the fact that there were opportunities to do so.

Take urban planning as an example. The Budget rightly proposes to identify five higher education institutions as centers of excellence for promoting better urban planning ideas by granting an endowment of Rs 250 crore to each. This is a welcome step, given that our urban spaces are badly in need of better planning to make them more equitable, inclusive, and climate-friendly.

This is an area where the idea of an urban employment guarantee, on the lines of NREGS, could have been integrated to address the issue of urban planning, as the urban poor lives in precarious conditions. In one of our recent studies with low-income migrant workers in Bengaluru, 39% reported living in congested shared spaces and about 51.5% used shared and public toilets for daily use, with 17% of 500 respondents using open space for toilets.

An urban NREGS-like program can be utilized to build and maintain public infrastructure and commons such as community rental for workers, toilets, schools, hospitals, parks, bus stops, etc.

The Budget has not allowed enough allocation even for the NREGS, which has been the lifeline for the rural population as well as the migrant workers who returned to their home villages in the last two years.

The budget has reduced allocations from the revised estimates for 2021 of Rs 98,000 crore to Rs 73,000 crores this year, which is equal to the Budget Estimate of the 2021-22 Budget. Higher budget allocations, rather than increasing it later, makes the program much more predictable, and therefore the reduction does not make sense.

Also, this is much lower than the estimate of Rs 2.64 lakh crore, made by the People’s Action for Employment Guarantee, required for providing employment to all eligible households for 100 days in a year. One also needs to remember that it is not a dole, it is paid in return for work, which often contributes to rural infrastructure and assets.

The Budget entirely depends on infrastructure and increased public capital investment to seek to boost private investment which, in turn, is expected to create employment opportunities. While this, in combination with NREGS for both rural and urban poor, could work well, depending on it alone is to lay all eggs in one basket.

The Budget emphasizes IT and digital in all sectors, and this is one sector that has less direct employment potential. In one of our studies on the service sector’s long-term contribution to Karnataka’s economy, we saw that though the IT sector had contributed significantly to the state’s income, its contribution to employment creation was significantly lower than other sectors. That is why the State is duty-bound to provide employment through NREGS and it needs additional allocation.

The loss of livelihood and income among the poor in the last two years has dented a number of essential aspects of children’s lives. Take nutrition, for example. The pre-pandemic NFHS-5 report based on the 2019-20 survey shows that everything was not moving in the right direction on that front.

With the further decline in services due to the pandemic, the nutritional status has further declined. This necessitated a higher allocation on nutrition in this Budget. Instead, the allocation has remained nearly the same as the previous Budget. No amount of capital investment, even if it is successful in creating employment opportunities down the line, is going to address this issue in the short run, and millions of children will continue to suffer from malnutrition.

It is a well-documented fact as to how students at all stages have either not been able to access education offered using digital – either online or television — modes, and even those who managed to access it have barely been able to continue schooling, with a very low level of learning. All they get now is another dose of digital in the form of e-vidya for schools delivered through TV, and a digital university that is expected to deliver high-quality education at the doorstep.

We know for sure that children and youth from poorer families need physical schools and colleges much more than better-off sections as this is also a place for them for socializing with fellow students from all classes and communities – something that helps them overcome their own lack of access to literate environments and well-resourced, including digital, surroundings. As a country that wants to reap the benefits of its demographic dividend, India needs to first fulfill its duties towards them by spending well on their nutrition and education and ensuring livelihood security for their parents. On these counts, Budget 2022 is a betrayal of the poor.

This article was first published in the Deccan Herald as Budget 2022: Betrayal of the poor, a failure of the State in its duties on 3rd February 2022