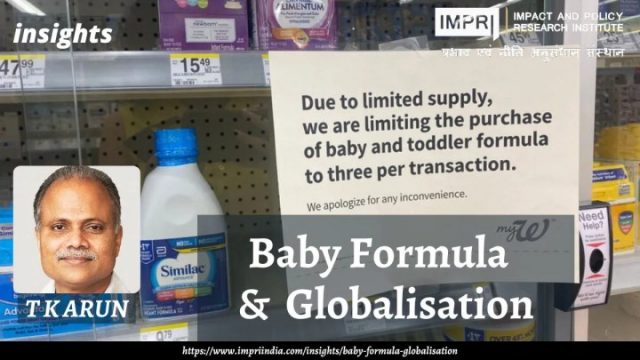 After the pandemic disrupted global supply chains and created shortages in markets far removed from the site of infections, localisation and nearshoring became the mantra of management gurus. Opponents of globalisation counted their proposition as self-evident. An ongoing severe shortage of baby formula in the US offers a counterpoint.

US’ Defense Production Act is a law that empowers the US President to order companies to cease production of whatever they have been manufacturing and put their production capacity to churn out what the US government deems a national priority at the moment. President Franklin D Roosevelt used his powers under the Act to ask, after the outbreak of World War II, General Motors to start producing battle tanks and Ford Motors to produce bomber aircraft. Right now, President Joe Biden has invoked the Act to increase the supply of not arms, but of baby formula, a synthetic substitute for breastmilk.

Now, according to the Wall Street Journal, about 98 percent of the baby formula sold in the US is made in the US. The US might not be entirely ‘atmanirbhar’ when it comes to the number of babies born, who would, within three decades, grow into highly-qualified talent that would power its knowledge economy. But when it comes to baby formula, the country is self-reliant. Further, just two companies, Abbott Labs and Reckitt Benckiser account for 80 percent of the market.

Pandemic disruptions had created shortages of everything, from toilet rolls to packed meat, on account of which workers at meat packers were labelled essential workers, without any choice on turning out to work, regardless of the risk of contracting COVID-19. This disruption had reached baby formula as well, but not to any debilitating extent.

The crisis came in February, when four infants on formula fell ill with a rare bacterial infection, and two of them died. The formula had been produced at a factory owned by Abbott in Michigan. It produced not just ordinary formula, but also specialised versions for children with allergies and other conditions that ruled out just any old breastmilk substitute. Abbot shut down its plant, and, for whatever reason, Abbott and the US Food and Drug Administration took nearly three months to finalise the conditions under which the plant could be reopened. The plant is expected to resume production early in June.

The plant produced enough to supply 20 percent of the market. When that was taken out of the market, people began to hoard. The shortage grew to some 40 percent of the demand. According to the Wall Street Journal, about half the number of stores in half of America’s towns experienced shortage of baby formula.

So, why have other plants not kicked in to make good the shortage caused by the Michigan plant’s shutdown? There are exacting regulations by the FDA, and standards for baby formula, which companies struggle to meet. When the problem became acute on social media, teeming with frazzled parents, wailing babies, and hoarders, as well as Good Samaritans, hawking their stocks, the White House could no longer afford to let the market sort out supply and demand.

The US government invoked the Defense Production Act. It flew in planeloads of formula from Germany on special military aircraft.

As the drama plays out, with angry mothers, frustrated fathers, smug Republican critics of Biden’s incompetence and presidential pivots from Ukraine and geopolitics to American babies in distress all cast as major characters, many have failed to notice that the much-touted localisation solution to shortage arising from global supply chain disruptions has proved to be a total dud. Localisation has actually proved to be a bane in the present context, and relying on global sourcing is the only thing that has offered some respite.

Clearly, the anti-globalisation rhetoric that gained strength in the wake of the supply chain disruptions during the worst days of the pandemic was devoid of merit. Self-reliance can be a vulnerability, if local production takes a hit for whatever reason.

That is not all. It is not just where things are produced that counts. The structure of the market also matters. The baby formula market in the US was not just a near duopoly, but also further complicated by State distribution.

A substantial part of the baby formula consumed in the US is distributed by government agencies that help the poor. Often, these aid agencies place single agent contracts to supply an entire state. When that agency failed to procure enough volumes to meet its obligations, on account of the shortage, the beneficiary babies of the entire state suffered.

It may be recalled that India’s distribution of anti-tuberculosis drugs faces a similar problem. The Union government procures the drugs and allocates them to the states, which make no provision in their own health budgets for these medicines. TB drugs have to be taken continuously for an extended period of time for not just the disease to be cured, but also to prevent developing drug-resistant variants of the tuberculosis bacterium.

In 2013, India faced a stock-out of TB drugs, with many states running out of drugs to let TB patients complete their course of treatment. Officials of the Union health ministry, spooked by the Vinod Rai indictment of causing loss to the exchequer on the flimsiest of grounds in the case of telecom, chose to retire without renewing the contract for the government to procure TB drugs. The contract lapsed, no orders were placed for these essential drugs, and several states faced stock-outs.

The lessons are clear. Globalised sourcing is a strength, rather than a vulnerability, so long as the sources are reasonably diversified. The domestic market structure must be competitive. Monopolies and duopolies represent vulnerability. Government contracting of supplies must take care of contingencies, in which the main winner of the supply contract is unable to make good on their delivery commitment. Unfortunately, this insight is straight out of the mouths of crying babes.

This article was first published in Money Control as Out of the mouths of babes: Localisation of production is no panacea.

Read another piece by TK Arun on Covid-The Paradox of Zero Covid & Common Prosperity in China in IMPRI insights.

Read another piece by TK Arun on GST-The New Rule for GST by the Supreme Court? in IMPRI insights.