Home Insights An Evaluation of the Union Budget in Relation to the Environment –...
Facebook
Twitter
WhatsApp
Linkedin
Email
Print 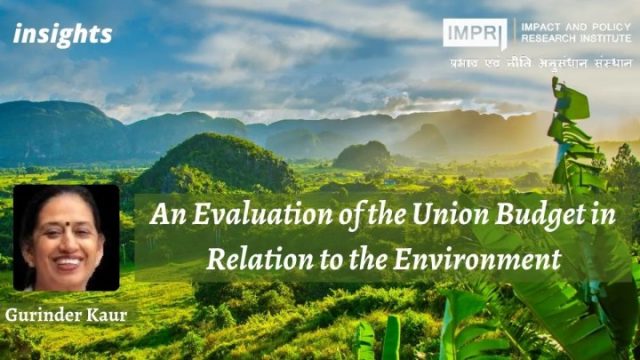 The Union Finance Minister Nirmala Sitharaman presented the Union Budget for the financial year 2022-23 on February 1, 2022. The Union budget is also called a ‘booster budget’  by the government because it focuses on strengthening business activities and infrastructure development.

An amount of  Rs.3030 crore has been allocated to the Union Ministry of Environment, Forests, and Climate Change. This amount was Rs.2870 crore for 2021-22. Introducing the budget, the Union Finance Minister emphasized the need for clean energy (energy generated from renewable sources) for the Climate Action Plan and said that there is a need for mindful utilization of energy rather than mindless consumption.

For providing irrigation, potable water, and hydroelectricity in the drought-prone region of Bundelkhand in Uttar Pradesh and Madhya Pradesh Rs.1400 crore have been allocated in the budget for interlinking of the Ken, and Betwa rivers. In addition to the interlinking of the Ken-Betwa rivers, it was also announced to connect the five other rivers including Damanganga-Pinjal, Par-Tapi-Narmada, Godavari- Krishna, Krishna-Pennar, and Pennar- Cauvery.

Under the Ocean Mission, it is planned to spend Rs. 650 crore in 2022-23 as against Rs.150 crore in 2021-22. In addition, Rs.361.69 crore has been earmarked for National Green Mission, Rs.300 crore for afforest/tree planting, and Rs.300 crore for a leopard conservation project. In all these areas, this year’s budget has been increased as compared to the previous year’s budget. An additional allocation of Rs.19500 crore has been made for production-linked incentives to the manufacturing of high-efficiency solar modules.

While presenting the budget,  the Union Finance Minister repeatedly used some positive words like clean energy, energy transition, clean environment, and climate action, but the Union budget of this year has slashed the budgetary allocation for the statutory body Commission for Air Quality Management (CAQM), which works for the air quality management in the National Capital Region, and Delhi from Rs. 20 crore in 2021-22 to Rs.17 crore. The deteriorating air quality of the National Capital Region and Delhi is confirmed every year by one or the other international body.

This year too, according to a September 2021 study by the University of Chicago, USA, the life expectancy of the people living in Delhi could be reduced to 9.5 years due to air pollution. The National Clean Air Programme(NCAP) was launched in January 2019 to provide financial assistance to the Pollution Control Boards, amounting Rs.2,217 crore for 42 cities with a population of over one million. No additional funds have been provided this year to address the issue.

Although the Union Finance Minister has used terms like clean environment and energy transition in her budget presentation, she has reduced the amount in the budget instead of increasing it to control air pollution. How can the environment be clean if the Union government does not pay for controlling air pollution in Delhi? To cover up their shortcomings, every year in the winter, when  Delhi and the National Capital Region are exposed to smog, the Delhi and Union governments blame neighboring states for Delhi’s air pollution.

Budget allocation for the six Statutory and Regulatory bodies related to environment and wildlife: the Central Pollution Control Board, the Central Zoo Authority, the Animal Welfare Board, the National Biodiversity Authority, the National Tiger Conservation Authority, and the Commission for Air Quality Management has been reduced by Rs.6 crore. Reducing the budget allocation of environmental organizations and regulatory boards also neglects environmental protection measures.

India had set three goals under the Nationally Determined Contribution to the United Nations Framework Convention on Climate Change in the Paris Climate Agreement to reduce the emission of increasing greenhouse gases into the atmosphere. These include reducing the emissions intensity of its economy, generating energy from renewable sources, and reducing atmospheric carbon by increasing the area under forests and trees. In the blind race of economic development, our country has also indiscriminately depleted natural resources in recent years. India is now the third-largest emitter of greenhouse gases in the world after China and the United States of America.

In India’s budgets from 2009-10 to 2021-22, more money has been allocated to generate energy from coal than from renewable sources and India is the third-largest producer of energy from coal. Even after the Paris Climate Agreement, India has made no effort to reduce its carbon emissions. According to a December 2021 report by the International Energy Agency, India’s use of coal for energy could grow at a rate of 3.9 percent per annum upto 2024.

India had asked for 100 billion to 1 trillion American dollars for the Climate Fund to help poor countries at the Conference of the Parties-26 in Glasgow, but in the present budget, only Rs. 30 crores has been allocated for its Climate Action Plan which is a very meager amount for controlling any kind of natural disasters. According to a December 2020 report by the Council on Energy, Environment and Water,

75 percent of the country’s districts are suffering from climate change As a result, India has suffered a loss of 87 billion American dollars due to natural disasters in 2021. Our country has also promised in the Paris Climate Agreement to increase the area under ​​forests and trees to reduce carbon emissions.

The budget of the National Coastal Mission has also been reduced as compared to the budget of 2021-22. Under the National Coastal Mission, the Ministry of Environment is responsible for the protection of coastal areas from natural disasters, ensuring the livelihood of coastal communities including fisherfolk, fauna, and flora, to conserve the coastal stretches and to promote sustainable development of these areas.

The Union Finance Minister said that in the next three years 400 energy-efficient trains would be manufactured and 25000 km of National Highways would be constructed. Uttarakhand, Himachal Pradesh, and the states in the Western Ghats are already paying a heavy price for the expansion of national highways. According to Land Conflict Watch (a data research agency), the expansion of infrastructure is affecting 1.5 million hectares of land and 4.4 million people across the country. These infrastructure projects are often causing severe damage to the environment.

The Union government has announced an amount of Rs.1400 crore in this budget for the project interlinking of Ken, and Betwa rivers. The government says it will irrigate 9 lakh hectares of land, provide drinking water to 62 lakh people and generate 103 megawatts of electricity, but according to environmentalists, it will cost a lot of money as well environment.

When rivers are connected to each other, a huge amount of river water will be absorbed by dry land. In addition, a river or stream flows naturally in a certain direction. If an attempt is made to change it, after some time it returns to its natural course, which increases the incidence of floods. In this regard, we should learn from the experiences of developed countries. Human-made changes in the Mississippi River course of the United States of America have led to a dramatic increase in the number and intensity of floods.

Before 1960, the Aral Sea was the fourth largest landlocked sea in the world. At that time,  the water of the  Amu, and Syr rivers flowed into it. For irrigation purposes, dams were constructed on the Syr, and  Amu rivers as a result of which the Aral Sea received very little water, which caused it to shrink. Punjab’s Sutlej river is also dying unjustly due to the construction of the Bhakra Dam. Allocating funds in this year’s budget to interlink the Ken, and Betwa rivers could be an election issue for the government. This project will be very dangerous for the environment.

There are many water-related problems in the country. To address them, the Union government does not need to interlink the rivers, but to clean them, that is, to make them pollution-free. The government should ban the dumping of any kind of sewage in all kinds of water sources, impose fines for the dumping of wastewater of any industrial units and sewage water of cities and villages in rivers and water bodies,  use purified water by installing plants,

On top of that, the government should increase the means of public transport in proportion to the population and provide funds through the Union budget to run them with clean energy. To make the environment of the country clean, the Union government should formulate nature-friendly development plans. To protect the people and the environment of the country from natural disasters, the Union government will have to increase budget allocation.