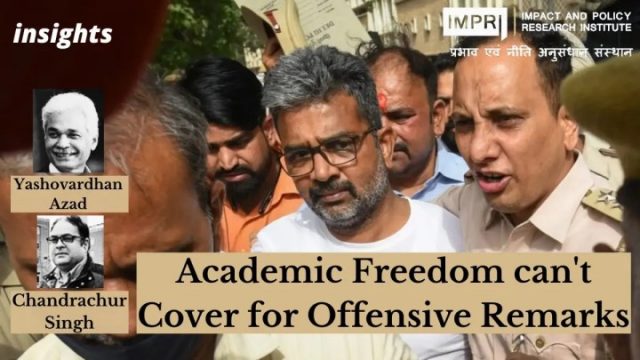 An academic at one of India’s most prodigious institutes of higher learning—Hindu College at University of Delhi—recently created a storm on social media by writing something allegedly so obnoxious that he himself clarified his intent was not to cause hurt or harm any community. Initially arrested for his tweet, he was later granted bail, first on the ground of the tweet simply being a failed attempt at satire, and second on the grounds of the subjectivity of perceptions.

While, both the acts of arrest and subsequent granting of bail to the academic had their own fair share of celebrations and condemnation, the episode certainly warrants a re-look at the extent to which the ideal of intellectual and academic freedom can be stretched to provide cover for distasteful, hurtful and offensive outpourings as scholarly expressions. They also call for the need for internal regulation by the academia.

Is this freedom of speech?

A commonly held belief, especially among the members of academia, is that pursuit of knowledge should always be a disinterested, nonpartisan, and apolitical endeavour.  This is not to suggest that members of the academia should be passive agents living in ivory towers disconnected from day to day concerns of our collective existence, or veiled from taking a stand on morally and politically vexed and volatile issues. On the contrary, universities are supposed to be incubation centres for the cultivation of values that allow free and rational views and opinions. The question is – can deeply offensive, off-the-cuff remarks posted on social media be allowed in the name of freedom of speech/academic freedom?

During the hearing of the bail petition, the counsel for the professor did accept that the accused himself was not only a Hindu but a Shiv bhakt as well. And if so, then was the professor not aware of the impact of his distasteful and vulgar remark on crores of believers who revere Shiv? Can a remark of this genre pass off as satire? Most importantly, is such deeply offensive dark humour expected from an academic?

An avalanche of social media posts against the professor’s comments could not have been manufactured or manipulated. License to free speech in a democracy comes with responsibility. It certainly does not cover wounding the faith of any community. Merely belonging to a marginalised community does not mean that the sentiments of others can be hurt or taken as granted. In fact, a healthy democracy can engage in debates over different facets of religion but refrain from coarse and offensive remarks.

Social media connects millions, and an explosive remark of this kind has an even wider reach. An FIR was lodged against the academic. While ideological blindness may have led to the questioning of the FIR, it must be remembered that Section 153A is applicable where “a person by words, either spoken or written, or by signs or by visible representations or otherwise, promotes or attempts to promote…. disharmony or feelings of enmity, hatred or ill will between different religious, racial, language or regional groups or castes or communities …”. If this does not apply in this case, what does!

Even if one were to accept the plea that the alleged tweet was speculative in nature or had qualifiers attached, that by itself does not necessarily dilute the charges of thoughtlessness or tackiness of approach on the part of the academic. On the contrary, it only points toward an afterthought or a last-ditch attempt towards saving oneself from disgrace or ignominy.

The Supreme Court in Amish Devgan v. Union of India remarked that malicious intent should be present to attract sections 153A and 295A of the IPC and also that public tranquility refers to public order and not law and order. 295A refers to a deliberate act outraging the religious feelings of a community. Was the professor’s remark so innocent that he thought it would pass off as a satire? It’s incredulous to believe. A remark like this may not create immediate law and order situation but certainly causes deep and widespread anger and hurt in a community.

It is, however, incumbent upon the State too to have acted maturely in its response. An arrest, in this case, was not necessary. Investigation could have been completed after recording his statement and collecting evidence, and the charge sheet filed in the court. The Supreme Court has given clear guidelines on arrest in cases with less than seven years of punishment.

The critical issue that emerges from the entire incident is about upholding the standards, quality and the manner in which viewpoints and stands are expressed. Academia is about serious scholarship that blossoms on sustained and systematic inquiry on a subject irrespective of whether the content is up to one’s liking or not. Moreover, there is a way of putting things in the public domain. A historian should live on effective archaeologically driven and substantiated claims and not simply on the imbecility of posts on social media. This is more applicable to academics particularly affiliated with prestigious institutions. Legatees of illustrious teachers and students as they are, they have to be mindful of the special responsibilities that they have of passing that very rich legacy to the progeny.

This article was first published in The Print as DU prof Shivling case shows why academic freedom can’t be cover for distasteful remarks on 1 June 2022.

Read more by Chandrachur Singh below:

Chandrachur Singh is an Associate Professor of Political Science at Hindu College, University of Delhi