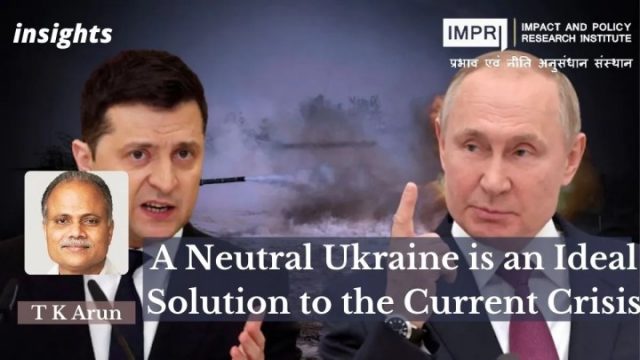 India’s stand on Ukraine is sensible and subserves India’s national interest. It cleaves to its philosophy of supporting conditions for India’s strategic autonomy in a world dominated by bigger powers, articulated first as non-alignment. Consistent with its stand on the war, India should mobilize opinion for a viable solution to end it: a neutral status for Ukraine, in return for security guarantees by Russia.

There are those who see India’s refusal to join the West in condemning Russia as the result of the vicarious celebration of Vladimir Putin’s toughness. They are oblivious to the wounds inflicted by the war on the combatants and civilians involved and their larger societies.

Such celebration of might is as reprehensible as misconstrued in identifying the motivation behind India’s response. Some others see India’s dependence on Russian arms and spares as the primary motivation for India’s reluctance to condemn Russia. This is a factor, but an incidental one.

Yet others see a justified detachment from European security concerns as the reason for India’s refusal to take a stand. This is ridiculous. When a Serbian nationalist assassinated Austrian archduke Franz Ferdinand on June 28, 1914, the aim was limited to liberating South Slavs from Austria-Hungary.

It triggered a chain of events that saw 1 million Indians fighting in the bloodiest war in human history till then, killing 90,000 of them. It led to the emergence of the Soviet Union, women taking on roles in public life, as men went to the battlefront, leading to the assertion of their right to vote and universal adult franchise. It led to the collapse of the Ottoman Empire and, eventually, to the rise of Adolf Hitler.

The historical convention marks the beginning of World War 2 on September 1, 1939, when Hitler sent his army into Poland. That, too, was an entirely European development. What happened in Europe has not stayed in Europe even in the times when Neanderthals and Homo sapiens roamed Europe — quite a few South Asians carry a fair bit of Neanderthal genes.

What makes Russia’s invasion of Ukraine less than condemnable? Ukraine’s insistence on joining the West’s military alliance, Nato, encouraged and egged on by the US and the European powers, has the potential to result in a war far more horrendous, a direct conflict between the world’s leading nuclear powers.

Crimea, the base of Russia’s warm water navy, was arbitrarily assigned to Ukraine by Joseph Stalin in the 1950s, after cleansing the place of its native Tartars. Crimea’s continuance under Russian control is vital for Russia’s continuance as a node of global power. After the Maidan revolution in February 2014, which removed a pro-Russian regime and replaced it with a pro-West, pro-Nato one, Russia annexed Crimea in March 2014.

This annexation is disputed by Ukraine, naturally. If Ukraine becomes part of Nato today, the entire western military alliance would, under its charter that treats an attack on one member as an attack on all members, be obliged to start a war over Crimea. The war would pit nuclear Russia against three nuclear powers, the US, Britain, and France. Would this war be preferable to the war underway in Ukraine right now?

Why bother about retaining Russia as a node of global power? Why not quietly watch it collapse and disappear, and cheer the forward march of democracy? Absent Russia, the world would be hegemonized by two powers, the US and China, each declaring, ‘If you’re not with us, you’re against us.’ This narrows the scope for India’s strategic autonomy, considerably.

India does not have the luxury it had during the Cold War, of playing the Soviet Union off against the US and getting concessions from both. China is a hostile, aggressive power that encroaches on Indian territory. In a bipolar world of China and the US, India will have to kowtow to the US.

India needs alternate nodes of power that would give India the space to develop its own strength. Russia is an existing node of such power. Donald Trump’s isolationism had primed Europe to regain its muscle memory and become an autonomous power center in its own right.

With Germany now shedding its false modesty on defense, and Emmanuel Macron in vigorous pursuit of his place in history, Europe is ripe for asserting its own geopolitical identity.

The war in Ukraine must end first, and fast. For Ukraine to accept a neutral status, like Moldova or Finland, is the ideal solution. In return, it must obtain security guarantees from Russia. This, rather than sanctions, is the solution to the conflict.

Geopolitical power centers matter, as much as national sovereignty. To refuse to see this is disinformation, not a defense of rules-based world order. Yet, war is a terrible solution to a conflict between the two. Neutrality on Ukraine’s part would preserve both.